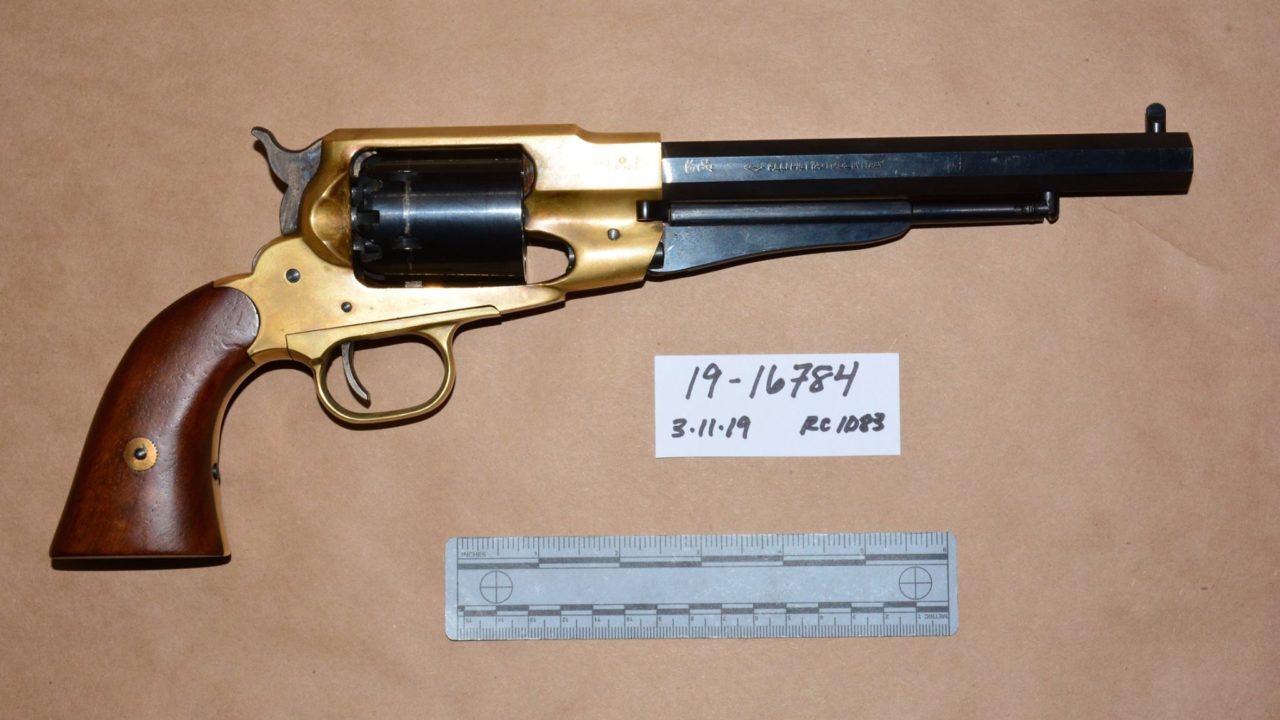 On March 11, 2019, a man in Fresno, California was pulled over at a routine traffic stop. The driver, a 19 year old gang member with apparent past felonies, admitted to the officers that he had a .44 Magnum under the seat, and was promptly arrested and booked for being a felon in possession of a firearm.

There’s just one little problem with this scenario: the gun in question was not, in fact, a .44 Magnum. It was a replica Remington 1858 cap and ball revolver. Take a look for yourself.

Now, black powder enthusiasts will notice a few things right away. Firstly, there’s nothing “Magnum” about this thing. With that brass frame, you’re asking for trouble if you load with more than 30 grains of powder, and I’m honestly not sure I’d go that high. The 1858 is a sturdy little pistol, but you simply don’t take chances you don’t have to with these things.

Secondly, it’s doubtful that it was loaded, or at least, loaded correctly. No caps on the nipples, see. No, I did not just make a dirty joke. At the back of each chamber is a nipple, over which a brass percussion cap is placed. Much like the primer on a modern cartridge, it explodes when struck by the hammer and ignites the propellant. They’re notoriously fiddly little bastards, too. Getting them on there is a pain, and getting them off a loaded weapon, short of firing it, is actively dangerous. It can be done, but no one in their right mind wants to. Since the revolver shows no signs of having been fired recently, there are no visible tool marks on said nipples (quiet, you), and I have to assume that no one was stupid enough to use their frigging fingernails to do it, Occam’s razor says there were probably no caps on it in the first place.

In other words, it might have been intimidating to a gangbanger, but would be far more useful as a club or maybe a boomerang than as a firearm.

Which leads us to our third and final point: in most of the country, this would not count as a firearm, even if it was loaded properly.

In most jurisdictions, black powder guns or replicas of said guns designed before 1898 are not classified as firearms under law.

What does this mean?

For starters, they can be bought and sold without necessarily having to perform a background check. Most gun stores will make you do one anyway just to cover their ass (at least where I’m from,) but it’s not mandatory. You also don’t necessarily have to be 21, either. Some places are more strict than others, so check your local laws before trying it out, but it might even be legal for a felon to own and carry one in many areas.

Our would-be Wyatt Earp might not have even committed a crime, had he been anywhere else but California. Trying to nail down the exact statute under their positively Byzantine maze of gun laws is hard, but it seems that they ban felons from owning black powder weapons that could easily be converted to cartridge firing by swapping out the barrel or breech block. Conversion kits do exist for the 1858, and although I’ve never tried to install one, the fact that the cylinder swaps out easily enough means that it’s probably good enough for a conviction.

Which, if you ask me, is pretty freaking stupid.

There’s no question that this kid was trouble. A self-admitted gang member and a felon at 19? That’s hardcore, though one can’t help but wonder just what the hell he was convicted of. Couldn’t have been too nasty, or he’d have still been in prison. Random shot in the dark says nonviolent drug crime. So, maybe not all that hardcore after all.

Sure, there’s the gang thing, but let’s stop and think about that for a minute. Street gangs don’t pop up for shits and giggles. There are a variety of social and economic factors that make gang membership attractive, but what it typically boils down to is young, poor, and desperate folks looking for a better life than what they think they can get on their own.

I’m not defending gangs, mind. Many are cruel and vicious, and even the more “benevolent” ones more often than not work on the wrong side of the law. They are a blight on society and we should do everything in our power as a nation to eliminate them.

An element of that can and should be cracking down on criminal activity, but there’s far more to it than merely putting police patrols in rough neighborhoods. If you really want to eliminate gangs, you have to eliminate the circumstances that make membership attractive in the first place.

Security is a big part of that. It’s no secret that gun laws disproportionately affect minorities and the poor, the two demographics most likely to join a street gang. Being able to get one’s hands on a gun to protect oneself and one’s family is undoubtedly a draw for some who have no legal means of arming themselves. Until things change to allow those who statistically could most benefit from gun ownership afford them legally, they’ll continue to seek other means of acquiring them.

Which brings me back to Fresno. Fresno PD didn’t do anyone a favor by arresting this kid. If anything, they’ve made lives much harder for themselves. A nonviolent felon in possession of an antique is not a threat to society. He might actually be onto something that could help save it.

With practice, black powder pistols such as the Remington 1858, various Colts, and so on, make effective defensive weapons. If you care for them properly they’re plenty reliable, and if a .44 cap and ball ain’t no Magnum, it’s still plenty for someone across a room. Plus, they don’t tend to overpenetrate nearly as much as most modern handgun rounds, so you greatly reduce the chances of collateral damage.

What’s more, while they’re fine for defense, they’re worthless as offensive weapons. Limited shots, short range, loooooong reload times, these aren’t guns you want to knock over a bank with. Hell, most of them you can’t even really conceal. Doesn’t matter how baggy your britches are, everyone’s gonna know you’re packing, and that’s a good thing, because so are they.

After all, you can get black powder revolver replicas for dirt cheap. My Colt 1851 Navy replica cost me $120 out of the box. That’s a price point that’s hard to beat, even for Hi-Point. And you can’t tell me you wouldn’t rather look like a badass with a smoke wagon on your hip than a doofus with a Hi-Point. And when you consider the cost of purchase permits, concealed carry classes, the fees for that permit, and all kinds of other crap, the replica starts to look downright affordable.

In short, the Fresno Police shouldn’t be arresting this kid. They should offer him a job, spreading the word far and wide: if you’re going to defend yourself, to hell with filing the serial numbers off a stolen Glock. Get yourself a black powder wheelgun, don’t cause problems for us, and we won’t cause problems for you. I don’t care how you slice it, that’s a win for everyone.
__________________________________
Kevin Wilson is a lifelong resident of North Carolina and editor of Unapologetically American. He currently serves in the North Carolina Army National Guard as an artilleryman. His hobbies include writing, drinking, drinking while writing, and yelling at kids to get off his lawn. He currently holds the record for youngest grumpy old man in his battalion.