HomeFitnessTesting My Mettle to Earn My Medal: A Ragnar Trail Experience 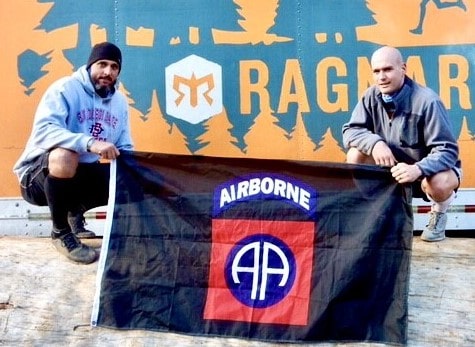 On November 1st, 2017, I got a call from a buddy that rarely calls me and when we do communicate, it’s through text messages. “What’s up, bro?” I asked. “Hey, my Ragnar teammate just got called for duty, he can’t make the race. We need a runner.” I didn’t know what a Ragnar Race was, but it sounded interesting so I accepted the invitation. “Oh yeah, one more thing, every person on the team was in the Marine Corps. You and me are the only Army vets.” “Great,” I said sarcastically.

I read up on the Ragnar Race and found out I had nine days to train for a race that required me to run roughly 14 miles. The race was located at the Los Coyotes Indian Reservation, a 25,000-acre preserve in the middle of Southern California mountains, and would take place over the course of two days. The terrain would be treacherous – up and down mountains, with patches of thick vegetation and rocky paths. On top of this, I wasn’t a runner. In fact, I hated running with a passion. Luckily I did CrossFit workouts regularly and had a pretty clean diet. At least I wasn’t starting from rock bottom.

The next day I decided to go for a four-mile run near my house in south San Diego. It sucked, but I finished without stopping and maintained a pace of about 8 minutes per mile. The next two days I was extremely sore but managed to do a few more short runs leading up to the 10th of November. 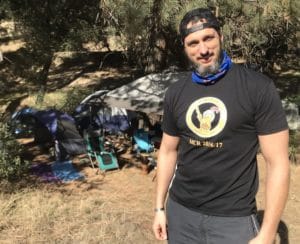 On race day, we arrived at the venue and I realized the scale of a Ragnar Race. There were over a thousand people present. We arrived at the campsite and made our way over to the team tent. Between the eight of us, there was a broad age (and fitness) range. I knew I would perform above average but still wanted to crush this competition. Every single one of them had Marine Corps tattoos. Being a former paratrooper, I knew I had to prove myself. They didn’t care whether I had time to train or not, this was still about inter-service rivalry and finding out who was the best. I extended my arm and shook each of their hands. “Hey, you know what ARMY stands for,” one of them asked? “Aren’t Really Marines Yet,” the dumbass laughed. “Do you know what USMC stands for?” I asked him. He looked at me quizzically. Pointing at him, I said, “U Suck My Cock,” and smiled. I wasn’t going to be the weakest link among a bunch of crayon-eating Jar-Heads; the race had begun.

We would all be running a total of three legs during the competition, and, collectively, covering about 114 miles of trail. In between legs, we would have about eight hours of downtime to hang out in the team area, rest, eat and hydrate.

My first leg was starting – 8 miles. The hill I climbed seemed to never want to end. I knew ascending for this long at a running pace would quickly burn up my lungs, so I took my time. The hill kept going, and going, and going. After what seemed like an eternity, I made it to the top and got back on a faster, longer stride. During my descent, I gazed off onto the horizon. The mountains looked incredible. The scenery made this one of the most gorgeous runs I had ever experienced. As I progressed further, the sharp pain in the arches of my feet made it apparent that they needed some attention. I made my way down the mountain and found the finish line. Once there, I handed off the electronic tracker (to log our progress) to the next runner. He seemed surprised by how soon I made it back. There were about eight hours left before my next section of the trail began, so I made my way to the first-aid tent to get checked out.

I arrived at the tent and waited behind a half-dozen other competitors who also needed some work. Once they got to me, the paramedics were happy to help me out with the blisters that had formed on both of my feet. After disinfecting the sores, they patched me up with moleskin and I was soon back on my way again, heading towards the campsite. 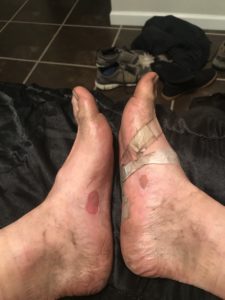 Once at the encampment, my buddy and I decided to grab some dinner from one of the Ragnar sponsors. This ranged from pizza to potatoes, to pasta. We had a large selection to choose from and I decided to load up on carbs with pasta and meatballs. The meal was delicious and gave me plenty of energy for the rest of the race.

My next leg started at 9 PM and was roughly three miles. Compared to the eight miles I had finished a few hours earlier, this felt like a walk in the park. It was at night, so my body temperature remained cool the entire time and I kept a fast pace throughout. I made it back to the finish line and headed to the team campsite for some rest. My next leg started at 6 AM. I sat under the team tent and talked to a couple of the guys who were preparing for their next part of the run. In between taking swigs of water and snacking on trail mix, I got to know a few of them pretty well. After a while, I walked over to my camping tent, got into the fart sack, and caught up on some sleep.

“Hey, Heath, get up, it’s almost time for your final leg,” said my buddy. I could barely move. Every muscle in my body was sore, my feet were swollen, and I had a headache. I didn’t want to do the last leg – just over three miles. But I had to prove myself and knew all my teammates were counting on me. “Let’s go, Army. Pain is weakness leaving the body,” one of the Marine veterans jabbed. Slowly, I slipped my shoes on and made my way to the fire (at Ragnar Village) near the starting line. Near the flames, I stretched and got myself limbered up for the last bit of this race. It was going to hurt, but I was going to do it. I was going to finish.

My teammate handed me the sensor as he finished his leg and I was off. The blisters on my feet ached and made every step excruciating. It reminded me of my time as an infantryman in Afghanistan, making my way up and down the mountains, regardless of how much it hurt. On deployment, I focused on the next step, every step, and just kept going. With this mindset, I maintained my pace for the final leg and concentrated on the goal instead of the pain. Eventually, I saw the tents and the fire again. I was almost there. As I made my way closer and closer to the finish line, I could see my team – all of them. They had made their way to the finish line to cheer me on. I had finished. It was over. I was done. 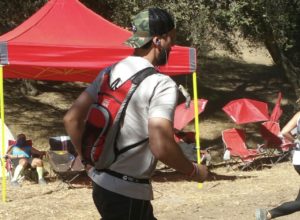 We all walked back to the tent. It was now November 11th, 2017 – Veterans Day. We were all former servicemen and celebrated the holiday, and the race, with a beer. There was no longer a sense of rivalry, we were just friends trading war stories about difficult spots on the trails we had just conquered. I was glad I had come out and helped these guys. The team, Los Chavos Del Ocho, made it all worth it. When I got home that night, knowing I had never stopped on the trail and kept a consistently fast pace, I slept better than I had in months.

A few weeks later, my buddy told me the final results of the race had been posted. Out of dozens and dozens of competitors, our team finished third overall in our division. He handed me the medals we had won as a unit – our effort had paid off, and my Ragnar experience was complete.