HomeFitnessThe Flu and You: How to Not Get Sick This Year

What is antigenic drift? The virus, in an attempt to avoid being attacked by the body’s immune system, changes the way HA and NA appears to the body. Think of it as a spy in a foreign country who is always changing his appearance to avoid being caught by the host nation’s police. The more often he can change his appearance the less likely he will be caught. According to the CDC:

“Most of the H3N2 viruses circulating are “drifted” or different from the H3N2 vaccine virus; suggesting that the vaccine’s ability to protect against those viruses may be reduced. Two factors play an important role in determining the likelihood that flu vaccines will protect a person from flu illness: 1) characteristics of the person being vaccinated (such as their age and health), and 2) the similarity or “match” between the flu viruses in the vaccine and those spreading in the community.”

Most years there is good efficacy among the vaccines, but hopefully now you can see why the vaccine does not guarantee 100% immunity to the virus. 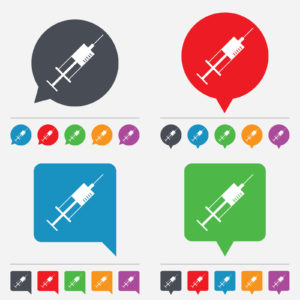 Like most viral infections, if you are healthy, chances are it will pass in three to seven days. Over the counter medications like acetaminophen will help with aches and pains and fevers. Just don’t give your children aspirin due to the risk of rare, life-threatening disease known as Reye’s syndrome that arises when you give aspirin to a child with influenza or chickenpox. You should also drink water and eat as you normally would. When you’re febrile, meaning feverish, your metabolic needs increase, therefore you can become dehydrated more quickly.

The antiviral treatments available are oseltamivir (Tamiflu), zanamivir (Relenza), amantadine (Symmetrel), and rimantadine (Flumadine). These drugs can help with the symptoms and can decrease the severity by about a day. They are prescription medications and should be taken within two days of the onset of symptoms. Any later and they won’t work. Tamiflu is the only drug available for use in children under one year of age.

Although most people will get over their bout with the flu without much complication, there are certain populations that are highly susceptible to far more serious complications such as the very young, the very old, and those who are immunocompromised. However, when there is extensive drift, even the healthy are at risk of death.

Typically, the influenza virus is not lethal, however the sequela, meaning an aftereffect, can create an environment for a second pneumonia. This so-called secondary pneumonia can be fatal. Staphylococcus aureus is an extremely lethal bacterial pneumonia that people with the flu are at risk of catching. The flu causes swelling and fluid accumulation that allows bacteria to grow. It also makes it easier for bacteria to invade by decreasing protective mucus production and immobilizing the little hairs that help you move unwanted material out of your lungs. In addition, the excess edema (watery fluid) can make it difficult for air exchange in the lungs, making it harder to breathe.

The flu has been around for a very long time and will be around long after us. The WHO, CDC, and private industry do their best to protect us from it. While the process could be better, overall the current method has worked well for many years now. Everyone should get an annual flu vaccination. There are many places that offer free or discounted flu vaccinations. As always, please stay away from the misguided, ill-informed anti-vaccination groups.

At the time this article was written Andrew D. Fisher was a medical student at Texas A&M College of Medicine after serving many years as a physician assistant with the U.S. Army. He joined the Army in 1993 as a Light Infantryman and spent three years at 1st Battalion, 75th Ranger Regiment before leaving the Army to pursue a college education. He is a 2006 graduate of the Interservice Physician Assistant Program. His previous assignments as a PA include UNCSB-JSA (Republic of Korea) and 1st Battalion, 75th Ranger Regiment. He has deployed seven times in support of the Global War on Terror/OCO.

Andrew has taken care of more patients in the 75th Ranger Regiment than any other person since October 2001 and is the 2010 Army PA of the Year. Known as Old Man River, he is always angry, irritable, and cynical; at least it appears that way. He considers himself to be the least talented writer for the Havok Journal, but is very appreciative to have the opportunity. In his spare time he enjoys… who are we kidding, he has no spare time.