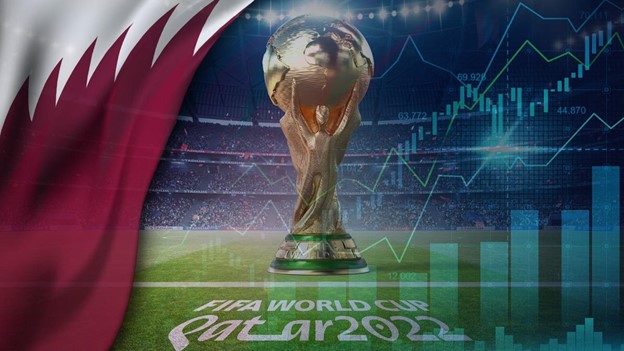 The economic impact of the 2022 World Cup in the Middle East remains immense. Of the 32 international football clubs participating, only one gets a championship. The 16-team knockout stage is underway – without its host team.

With much controversy surrounding the tournament, let’s examine the economic positives.

How Will the World Cup Affect the Qatar Economy?

The peninsula of Qatar juts out northward from the Kingdom of Saudi Arabia. It has a population of under three million. The Arab country rests between Bahrain and the United Arab Emirates.

Qatar’s capital city, Doha, is its cultural epicenter. It has 2.4 million citizens – over 80% of the country’s population.

Hosting this year’s FIFA World Cup gives Qatar a chance to lift its public image on the world stage.

The World Cup offers the potential of a short-term economic boost to the Middle East. Revenue projections for Qatar stood at almost $5 billion. Some economic impacts include boosts to tourism, the creation of jobs, and hotel stays.

In attracting over 1.2 million fans, the tournament represents a PR opportunity.

What are the advantages of having the World Cup in Qatar?

The benefits of hosting the World Cup often fall into the category of economics. Job creation for the tournament came with plenty of controversies. There were reports of underpaid workers in poor living conditions.

Could that have a positive long-term effect on migrant workers? With Qatar in the spotlight, it may help improve workers’ conditions. Public outcry suggests the need for change and fundamental human rights.

Rushing to meet the tournament deadline is also an issue to consider for future events. Other host countries should take note.

More than five billion people may watch this year’s tournament. It’s a unique opportunity for any host country – with pros and cons.

The economic impacts of hosting the world cup include merchandise and ticket sales.

How much are the 2022 World Cup tickets? It depends on the game type and seat category.

A Category 1 ticket is the best option, with prime locations around the stadium. These tickets start at $220 for Group Matches and $275 for the Round of 16.

Category 2 and Category 3 tickets come with seats that offer a “less optimal view” of the games. They range from $69 to $165 for Group Matches. Foreign spectators pay between $96 and $206 for Round 16 matches.

Category 4 tickets get reserved for Qatari citizens. They pay $11 for Group Matches and $19 for Rounds of 16 games.

As the tournament progresses, tickets get more expensive. Quarterfinal matches range from $82 to $426. Semifinal matches cost $137 to $956.

What about betting on World Cup games?

The World Cup tournament is one of the biggest events in the worldwide betting industry. The American Gaming Association said 20 million Americans might bet on the tournament.

The AGA predicted a betting volume of almost $2 billion from U.S. gamblers. That’s not counting the billions wagered elsewhere.

An offshore site like BetUS is one of the top sportsbooks in the industry. It’s an A-rated sportsbook, licensed and regulated in Curacao.

The global industry’s betting handle on the World Cup may reach $35 billion. It represents a 65% increase from the previous tournament. (Licensed bookmakers may generate as much as $1 billion during each knockout game.)

The rise in betting popularity stems from a boost in online gambling during the pandemic.

Hosting the tournament in Qatar offers economic benefits to sportsbooks in Europe. The time zone matches some of the world’s largest football betting markets.

How does the World Cup impact society?

The World Cup offers a spike in tourism along with spending at local businesses. Selling TV rights for the tournament is a massive source of income for FIFA.

The tournament also impacts the surrounding countries in the Middle East. Qatar hopes hosting the event adds to its “soft power” with political influence. Regional economic growth may increase by about 9% in the next few years.

Future events include Formula One races in Saudi Arabia and Bahrain. The UAE also plans to host tennis tournaments and international golf outings.

In essence, the societal impact of this year’s World Cup is controversial yet innovative. Cultures of the Middle East may find progress in opening up to the rest of the world.

The impact of the 2022 World Cup in the Middle East includes long-term effects. For generations, the region existed on oil wealth in a somewhat monopolized fashion.

The U.S. and Russia emerged as top oil producers – ahead of Saudi Arabia. That left uncertainty among economies wholly dependent on one source of income.

For that reason, a place like Dubai (UAE) became a major international hub for travel and finance. Qatar’s hosting of the World Cup is another big step in a more globalized society.

It may have a massive economic impact on the Middle East – for many years.