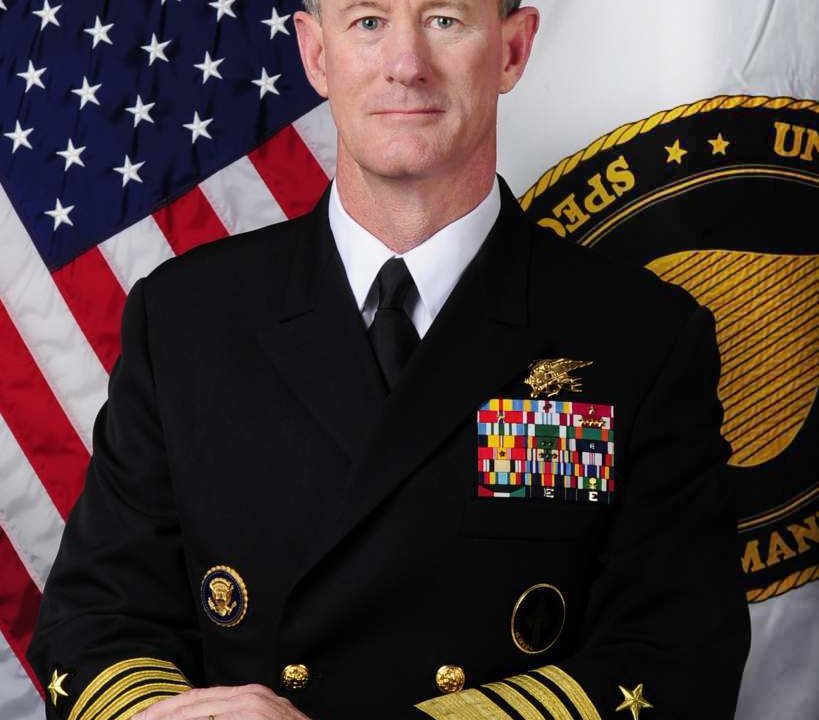 Text of Admiral McRaven’s Op-Ed, as it appears in the Tampa Tribune:

When I was a young boy my father, a veteran of World War II and Korea, schooled me on the downfall of Gen. Douglas MacArthur. MacArthur, he explained, had overstepped his authority and shown blatant disrespect for the civilian leadership of the country. President Harry Truman relieved him of his command, and MacArthur retired soon thereafter.

Civilian rule of the military was one of the most fundamental principles of the armed forces. To believe differently was dangerous, my father told me. Dad strongly supported Truman’s action, and he made me understand the value of the civil-military relationship — a lesson I never forgot.

But over the past decade I have seen a disturbing trend in how politicians abuse and denigrate military leadership, particularly the officer corps, to advance their political agendas. Although this is certainly not a new phenomenon, it seems to be growing in intensity. My concern is that if this trend of disrespect to the military continues it will undermine the strength of the officer corps to the point where good men and women will forgo service — or worse the ones serving will be reluctant to make hard decision for fear their actions, however justified, will be used against them in the political arena.

Adm. Losey is the commander of all Naval Special Warfare forces — the SEALs and Special Boat sailors. I have known Losey for more than 30 years. He is without a doubt one of the finest officers with whom I have ever served. Over the past 15 years no officer I know in the SEAL Teams has given more to this country than Brian. None. As a young officer he was constantly deployed away from his family. After 9/11, he was sent to Afghanistan in the early days to help fight the Taliban. From there, Losey participated in the final march to Baghdad and then stayed in country as a SEAL Task Unit Commander. Afterward he served as the deputy and then the commanding officer of SEAL Team Six during more tough fighting in Afghanistan.

Later he was posted to the White House in the Office of Combating Terrorism. He made rear admiral in 2009 while at the White House. He was subsequently sent back overseas to Djibouti, Africa, to do a 15-month month isolated tour as the commander of all U.S. forces in the Horn of Africa. As a result of that successful tour, he was given command of Special Operations Command, Africa (SOCAFRICA).

SOCAFRICA was a relatively new command, which had been established to address the growing threat in North Africa. Located in the beautiful Swabian city of Stuttgart, Germany, it was initially staffed with military and civilian personnel from another nearby special operations unit. Although most of the men and women were incredibly capable, hard-working staffers, there was a small core who had been living in Europe for years enjoying the comfortable lifestyle in Stuttgart.

Upon Losey’s arrival in Germany, the situation in North Africa changed dramatically, and the fledgling SOCAFRICA had to quickly get on wartime footing. Brian Losey did just that.

Losey is a no-nonsense officer who knows what it takes to get results. Combat is hard. Lives are at stake. Being genteel and considerate of everyone’s feelings are not the qualities that will engender success. But although Losey can be a tough taskmaster, he is a “by-the-book” officer. Unfortunately for Losey, along the way to strengthening the command there were those who fought the change and through a series of whistleblower complaints sought to seek his removal.

At the time, I was the commander of the U.S. Special Operations Command in Tampa. I worked with Gen. Carter Ham, who commanded U.S. Africa Command and had operational control of Adm. Losey, to investigate the complaints.

The investigation we initiated determined that Losey’s leadership style, while brusque and demanding, did not warrant his removal. The Navy subsequently recommended Losey for two stars, and he was confirmed by the Senate in December 2011.

Although the Navy inspector general absolved Losey of any wrongdoing, his promotion was put on hold pending DOD inspector general resolution of the complaints. Nevertheless, the secretary of the Navy agreed to reassign Adm. Losey to the premier job in Naval Special Warfare — command of all the SEALs.

During the past three years as commander of Naval Special Warfare Command (WARCOM), his staff has consistently ranked WARCOM to be one of the best places to work in the Navy. He has passed all Navy IG inspections with flying colors, and the retention statics for his young officers and enlisted is exceptional.

However, in the course of those three years, the whistleblowers from Stuttgart continued to pursue Losey’s removal and resignation, routinely submitting new complaints to prolong the process and hold up his promotion.

A series of DOD inspector general investigations were reviewed by the Navy leadership and, once again, Adm. Losey was found not to have violated any law, rule or policy. In fact, it was clear to the Navy that the personnel action taken by Losey against the complainants was not reprisal. He was recommended again for promotion to two stars.

Despite the Navy’s multiple endorsements, certain members of Congress chose to use Losey’s case to pursue their own political agenda. They held hostage other Navy nominations until Losey’s promotion recommendation was rescinded. The ransom for their congressional support was Brian Losey’s career and, more importantly, his stellar reputation.

They portrayed Losey’s actions as a case of the big guy seeking retribution on the little guy-whistleblower. In fact, it was a case of a few guys fighting to maintain their comfortable life at a time when others were at war and needed their support.

However, in today’s environment, when a leader challenges a whistleblower, there is an automatic indictment of the leader’s character. Questioning the whistleblower makes you guilty until proven innocent. And it is clear in this case that certain members of Congress didn’t care about Losey’s innocence. Nor did they seem to care that he has sacrificed more for this country than most members on Capitol Hill — or that the emotional strain of this investigation was devastating to his family. It is clear that all these lawmakers cared about was political leverage.

The case of Brian Losey is a miscarriage of justice. But the greater concern for America is the continued attack on leadership in the military.

During my past several years in uniform, I watched in disbelief how lawmakers treated the chairman, the service chiefs, the combatant commanders and other senior officers during Congressional testimony. These officers were men of incredible integrity, and yet some lawmakers showed no respect for their decades of service. I saw the DOD Inspector General’s Office frequently act as judge and jury, apparently accountable to no one, dismissing the recommendations of the services and ruining officer’s careers. I watched time and again how political correctness and pressure from Capitol Hill undermined command authority and good order and discipline.

Although we in the military understand the absolute necessity to serve and respect our civilian leaders — and every good leader understands and appreciates the value of anonymous complaints to ferret out bad leadership — we also need civilians to understand that a strong military, particularly an all-volunteer one, needs the support of our civilian leaders, not the constant refrain of disrespect that seems so common in today’s political narrative.

Last month, after the decision to rescind Rear Adm. Brian Losey’s promotion recommendation became public, Losey addressed his junior officers. Instead of being angry and bitter over the outcome, Losey had nothing but praise for the Navy and the nation for which he has served so long. He encouraged the young officers not to get discouraged about the ruling against him, but to recognize that this is the greatest military in the world and we are fortunate to be part of it.

I would echo Losey’s sentiments. But to keep this the greatest military in the world, to preserve the strong civilian-military relations we have so long enjoyed, we must recognize that respect works both ways. Every time an individual lawmaker’s political agenda undermines the integrity of the men and women in the military, we weaken the fabric of the uniform.

In light of the challenging times in which we find ourselves, politically and strategically, we cannot afford to have a military that loses respect for its civilian leaders. My father was right. The strength of America always rests with our nation’s civilians. God forbid we should ever see it differently.

Editor’s Note:  Since this article was published, ADM Losey was promoted… “in defiance of Congress.”