HomeCultureWar, and Unity: A Vietnam War Marine Looks Back 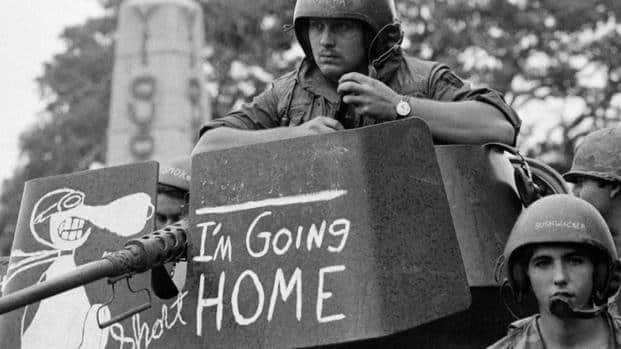 I have this idea that all wars are similar in more ways than one could imagine. Beyond the basics of kill or be killed or Geneva Convention realities. There are experiences that unite us even if we are 200 years apart.

I like being united with George Washington, and Private Joe Shit the ragman. Though we have never met we are united though somewhat common experiences a lousy place, terrible climate to fight in, an unfriendly populace even though we are there to free them from some form of slavery, and even something as little as sharing your chow with a child.

I like being united through my ability to read, remember or have a conversation with some guy that writes for a magazine. For me, a combat vet, I think I need this sometimes vague linking with those that were before me and those that are currently in some shithole war. Why? I’ll be damned if I know. But, I know I need it. I know I would be less than complete without it. It May sound like some bull shit but I can tell you that it helps stabilize me when men are fighting and dying on the battlefield of which I cannot walk.

I love to read or hear their accounts of shit in the wind times. I am linked through my experiences similar or not. It is not just a story I read. I have to try to imagine what it would really be like to experience the writer’s experience. I can place myself there to some degree even the sights, sounds and smells are with me. That being said I would like to replay in words a happening in a land far away and long ago. I have this idea that many of you will become linked to us young Turks through the images even though you may not have had an experience like this one. 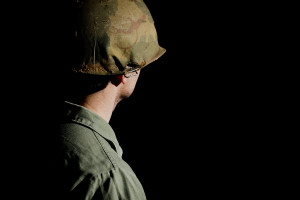 As we sat in the tree line looking for our night ambush position and chowing down a little we knew we were being watched from somewhere by someone. I hoped it would be the sneaky children that would sometimes follow us hoping that we would drop some c-rat candy for them as we move along. They knew that we knew they were there but they also knew getting too close to us could cost them their lives if Charlie decided to fire us up.

When I couldn’t feel them there I thought they were staying away because they knew Charlie or his big brother Sir Charles was near. I didn’t like when I could not feel the children were close. They were kind of like a little security blanket to me. I don’t know if the other Marines felt the same way but I suspect that they did. It was something that we just didn’t talk about. It was our private thought.

One might think that a small group of Marines with thousands of rounds of ammo, a dozen or more frags, several claymores, at least one m-79, and a few pounds of C-4 wouldn’t need a few kids close by to give them some peace of mind. If necessary, the RTO could even call in 81’s and 105’s within a minute or two if necessary. Those kids were an added layer of peaceful thinking in a very un-peaceful world.

Night fell and we moved into the ambush position between the Gulf of Tonkin surf and a little village next to a small pond. The sound of the surf was far enough away to ensure our ears were an asset. The pond might attract late-night canteen fillers.

A few minutes into our position the sound of a duck or goose scared the shit out of us! What the f..k was that? It was a goose or a swan. We had unknowingly settled into where she had a nest with what we found out the next morning had eggs in it. She was raising real hell charging at us and quacking constantly!

I motioned to the man closest to her to take care of her so we didn’t get compromised. He refused! I motioned to him again. He refused again! I started to really get afraid that our shit was going to be in the wind if this didn’t get fixed. It was too dark and too dangerous to move to another position. I motioned to him one more time and he again refused. I moved near him and the bird attacked me and I quieted it.

The ambush went dry that night and in the morning the dead bird lay there. I was bothered by the fact that the Marine that I ordered to kill it wouldn’t. I was more bothered that I did. Shit!! That bird had nothing to do with this war. It didn’t give 2 shits about us or the VC. It was an innocent bystander caught up in a situation that it had no control over. I don’t remember anyone say anything about it as we left the site headed to the wire about 6 clicks north.

We did notice a villager come get the stiff swan/goose for their cook pot. After entering the wire I got in the Marines shit about not doing what he was ordered and he would fill sandbags for corrective action. I will never forget what he said to me. I don’t care if you send me to the brig I was not going to kill that angel. Now you have to live with that. I can’t.

That Marine from Waterbury Massachusetts died 2 years ago from cancer. If I have one regret of my time in Vietnam, it was that we didn’t free the people….oh, and that I was brutal enough to have killed that angel.

This first appeared in The Havok Journal on February 27, 2019.