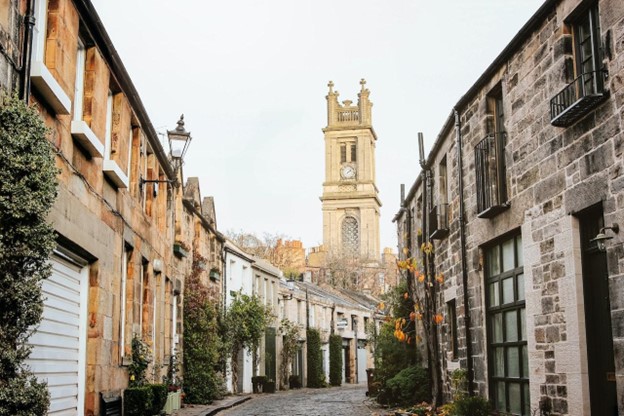 What’s your favorite period of history? Maybe it’s the 16th century, the time of the Tudors and the Stuarts. Or perhaps you’re a fan of the Victorian era when the great British Empire was at its peak. Or maybe you prefer the golden age of Hollywood, the Roaring Twenties, or the swinging sixties.

Like it or not, the world is constantly changing, and everything around us is getting faster, more modern, and more comfortable. But there are plenty of things in Edinburgh that remind us of a bygone age. These are the things you can experience in Edinburgh that take you back in time.

Edinburgh Castle is one of the most important historical places in the UK. Being one of the biggest tourist attractions in Edinburgh, it is also one of the most visited. The castle has a great history that goes back to the 8th century.

For example, it was the place where the Scottish nobility used to congregate in the 16th century. During the 18th century, it served as a military base. The castle was also used for the executions of political prisoners.

The most famous victim was the Scottish patriot Sir William Wallace. As Edinburgh castle is one of the most visited tourist attractions in Edinburgh, it provides a lot of amazing activities.

The most famous place in Edinburgh is a castle. You can book London to Edinburgh train tickets at Rail Online to get to Edinburgh by train from London, which is the best commute. The castle is located on top of the hill that dominates the city. You can climb the hill or take a ride up the hill.

It’s very interesting to see the castle from the inside as well. It’s a great place to visit and enjoy its beauty.

Calton Hill is one of the best-known hills in Edinburgh. A visit to Calton Hill is a must for any visitor to Edinburgh. Calton Hill is located in the very heart of Edinburgh, on the edge of the New Town. It offers a magnificent panoramic view of the city and its surrounding landscape.

A visit to Calton Hill is one of the best ways to escape from the hustle and bustle of the city. There is plenty to see and do. There are ruined fortifications and a number of monuments.

Calton Hill is the best place to start any tour of the city. No matter where you are in Edinburgh, you can see it. Steeped in history, it’s one of the city’s most famous landmarks. There are a number of myths and legends associated with Calton Hill, but the truth is more prosaic.

It was formed by the craggy remains of an extinct volcano. The Romans built a fortress on Calton Hill called the ‘Median’ or Middle Fort. You can still see the foundations of the ramparts and the remains of the walls on the grounds of the Observatory.

The hill is also the site of the National Monument, a huge stone column topped by George IV, which commemorates the Scottish soldiers killed fighting in Waterloo.

Stroll through the meadows

The Meadows, Princes Street Gardens, North Bridge and Victoria Park are the finest open spaces in Edinburgh. The Meadows is a green oasis in the city. It’s a great place to take a stroll and enjoy some open space in a city. There are several attractions within The Meadows, including the National Museum of Scotland and The National Galleries of Scotland.

You will find all sorts of attractions in the old town, including the famous Edinburgh Castle, palaces, and even the world’s most famous fictional detective, Sherlock Holmes.

The Palace of Holyrood is a royal palace in Edinburgh, Scotland, the official residence of the British monarch in Scotland since the Union of the Crowns in 1603. The palace is situated at the bottom of the Royal Mile, at the top of the Canongate, facing the high street of Edinburgh.

The palace has been the official residence of the Kings and Queens of Scots since the 16th century and is a setting for state occasions and official entertaining. It is a working palace with about 50 rooms which are often used for official and state entertaining.