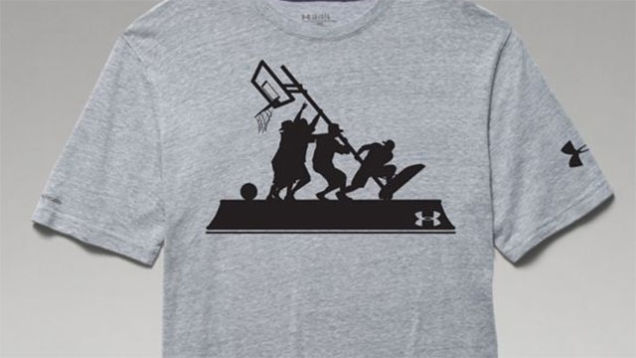 The wildly popular apparel company Under Armor (UA) is under fire again for yet another misguided crossover attempt to tie into the patriot/veteran market.  You might recall that UA took some heat a while back for outfitting the Northwestern football team in what they characterized as a “distressed flag” look but any reasonable person saw as Old Glory splattered with blood.  It was even more ironic that UA was contributing the proceeds to the Wounded Warrior Project.  It was good intent gone horribly wrong.

Or was it?  UA created the design to draw attention to their company, and it worked.  This event happened back in November of 2013, and in May of 2015 we’re still talking about it.  If “any publicity is good publicity,” then UA hit a home run.

Now, however, UA is walking back from another controversy involving its apparel.  This time it’s a “Band of Ballers” t-shirt which is clearly meant to invoke the Marine Corps-led flag raising at Mount Suribachi on Iwo Jima in WWII.  For many veterans, this time Under Armor went too far.  Here’s an image of the shirt, and the iconic photo upon which it was based: 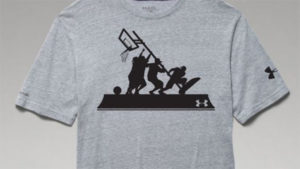 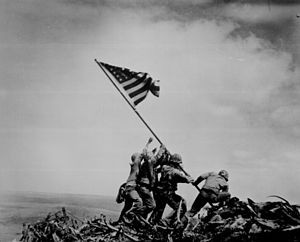 In case the image on the t-shirt isn’t clear, it shows a group of young men raising a basketball hoop in the same manner that the flag went up on Iwo Jima.  The “Band of Ballers” shirt invokes both the Iwo Jima flag raising and the “Band of Brothers,” the name given to a company from the 101st Airborne Division whose WWII exploits were popularized in Stephen Ambrose’s book and later in an HBO series of the same name.  My friends at Ranger Up’s Rhino Den summed up my own feelings about this issue far better than I could express.  But I think it’s also important to examine why several veterans had strong negative reactions to this image.

To begin with, Under Armor is appropriating a cultural icon revered in the veteran community, particularly among Marine Corps veterans, and reduces the sacrifice and valor that went into getting that flag raised to the level of a street-level game.  Futhermore, it takes the accomplishments and national pride exhibited through Band of Brothers and projects it onto a pickup game of hoops.  It equates the flag, the national emblem of our collective nation, to a piece of sports equipment.  Finally, and perhaps most importantly, it demonstrates how disconnected most of America is, that a major clothing company (which presumably either has veterans on its staff, or at least knows how to reach out to a veteran consultant) would think this kind of thing would be OK to the veteran community. 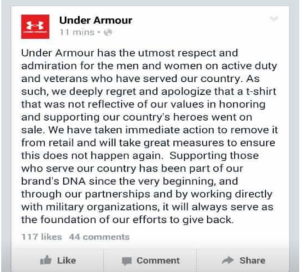 This isn’t like UA’s awkward football jersey fiasco; it’s not some kind of “support for veterans.” For many in the veteran community, it’s cultural appropriation of the worst kind.  It’s a sell-out of the veteran minority for profit.  And a lot of veterans deeply resent it.

I have to hand it to UA though, they knew they screwed this one up.  They owned it; not with some “if someone was offended” BS, but with something straight up.  As a veteran, I can appreciate that.  A lot of people can learn from this example.

I will say though that no organization “gives back” to the veteran community by trying to “take away” our symbols, traditions, or images and turn them into pop culture.  That is always going to be a non-starter with our community.  To many veterans, Under Armor went too far this time.  Agree with it or not, the rest of  America needs to understand why.

This article first appeared in The Havok Journal on 17MAY15.