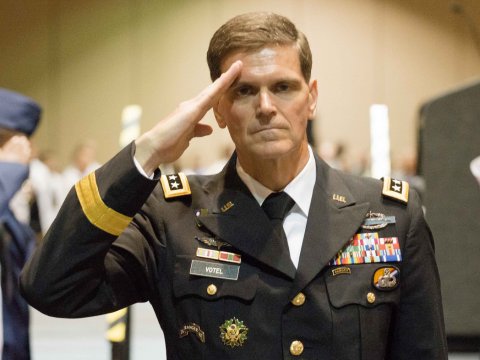 During his time as commander of Special Operations Command (SOCOM), former commander General Joseph Votel,  published a reading list for members of his command.  The 18 books on this year’s list are divided into the categories “Leadership,” “The Threat,” “Strategy,” “Intelligence,” and “Technology and Innovation.”  While there are many unfamiliar titles on the list, there are some very familiar author names:  Bolger, Isaacson, Kilcullen, Lemmon, Mazzetti, McChrystal and several others.

What I like about this list is that it reflects the broad base of knowledge from which military officers are expected to draw as they serve the nation in the profession of arms.  There is something for every military experience level on this list, from inspiring tactical-level stories like Ashley’s War and Warrior Diplomat to the strategic level, with Team of Teams and Why We Lost.  Complementing the military reading are deep-level strategy books like   emerging threats like The Future, Declassified and the internal threat of the “military-internet complex” represented in @War.

There are three books which I actually read on this year’s list, which is three more than last year.  Below are a paragraph or two of each of those books, whose authors, coincidentally, I have also met:  Why We Lost by Daniel Bolger, Ashley’s War by Gayle Lemmon, and Team of Teams by Stanley McChrystal.  If you have reviews on any of the other books on the list, or what to share your own views on the three books below, please feel free.  On the second page of this post is the complete reading list from the SOCOM commander, or you can also see it here.

Why We Lost by LTG (ret.) Daniel Bolger
General Bolger’s book has been popular in military circles because he dares say what most veterans of the Iraq and Afghanistan wars, particular those we responsible for running it (like LTG Bolger) have been too afraid to say:  we lost.

As a Division Commander and one of the general officers charges with training the Iraqi Army and, later, the Afghan Army and police, General Bolger operated at the highest levels of the US military effort in those wars.  What he saw there wasn’t pretty.

It’s also interesting that Bolger’s not afraid to cast some blame down to the tactical level as well.  He also addresses the national-level decision making going on with the Iraqis and Afghans, and isn’t afraid to take aim at non-governmental organizations. Some readers will also find it refreshing that he’s not afraid to target both himself and other general officers, something that rarely happens in this kind of introspective.  Definitely worth the read, especially if you’re a veteran of Iraq and/or Afghanistan.

If I had to sum it up in one sentence, I’d say Team of Teams is  “how to run your organization like JSOC.”  It’s everything you’d expect from a McChrystal book:  exciting, thoroughly researched, engagingly told, and completely relatable.

A follow-on to his first book, My Share of the Task,  Team of Teams seems a logical choice to be on General Votel’s list given that McChrystal was one of Votel’s predecessors as commander of both the Ranger Regiment and the Joint Special Operations Command.  This book was a quick read, full of interesting historical vignettes and gripping war stories.  It’s easy to understand regardless of one’s military or business experience.  Even if it weren’t, there is already a book of “key takeaways and analysis” of the Team of Teams if you don’t want to take the time to read the whole book.

Havok Journal’s own Leo Jenkins wrote a detailed review of this work, which you can read here.  Like Leo, I thought this was a great book, with a compelling story that relates a side of the military that one rarely hears about:  females in Special Operations units.  I also had the opportunity to meet the author and have dinner with her during one of her visits to a US Army installation.  Like her books, she is compelling, thoughtful, and interesting.  She is an incredible public speaker and advocate for veterans’ issues.

Ashley’s War tells the story of Lieutenant Ashley White, a member of an all-female Cultural Support Team which was attached to an element of the 75th Ranger Regiment.  LT White, and several other members of the team, including SFC Kris Domiej (a Ranger on his 14th deployment) were killed and wounded by a complex set of improvised explosive devices while on a Special Operations mission.  This book focuses on LT White’s life both before and after joining the Army, her efforts to become on of the first members of the elite Cultural Support Teams, and the unique aspects of serving in a Special Operations unit.  This book affected me on a deeply personal level.  I suspect it had that effect on many readers.