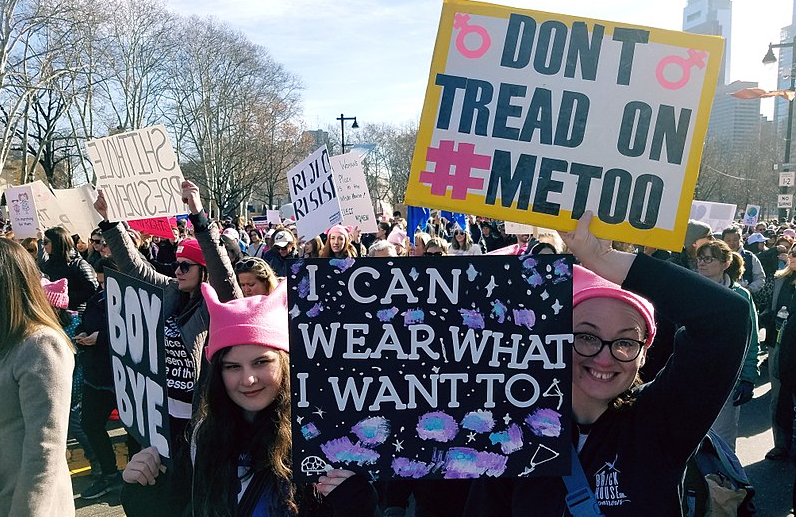 There’s a particular segment of the entertainment/political community that had it set deep in most people’s minds that they were open, accepting, and charitable people, that even when they’re wrong about something, their heart’s in the right place. Social media and current events have blown that all to hell; some of them are all but bragging on how petty and spiteful they can be towards anyone who disagrees with them on literally anything. They clearly believe their perspective is the only correct one, and everything else is hate. Not many issues have only one correct angle.

Some do though. Anything involving Me Too tops that list. Any guy who will physically force or chemically manipulate a woman to his will has EARNED the spotlight and whatever punishment comes his way. Lots of the famous folks are vocal about that, and it’s about the only thing I agree with them on. Except now we’re seeing evidence of agenda there, too. Alyssa Milano is known for torching men off allegations alone, yet she’s all of a sudden come to see the value of investigating a claim before destroying the man. Or before destroying Joe Biden anyway. Anyone with an R after their name is presumably still guilty upon accusation. Politicizing sexual assault. It just does not get any more depraved and despicable than that.

Lemme tell you something most people don’t know about me. I spent years going into high schools and junior high schools teaching sexual assault awareness and prevention. If I live to be a thousand I will never forget the look in the eyes of a woman I truly loved when she told me she’d been through that a few years before we met. I’ve always known that was a terrible crime, of course, but I didn’t get the gravity of it, how deep that scar can run. I didn’t get it because I never really thought about it, a luxury only available to guys. But I saw the light on that day. That was 40 years ago, and I’ve not seen her for the last 35 of them, but the gut-wrenching sadness in her eyes hasn’t faded from my mind even a little. I wanted, I desperately wanted, to kill someone for her. But there was no one for her to aim me at; they were strangers, and they’d never been caught. I couldn’t avenge her. But I had to do SOMETHING.

I’m a pretty empathetic guy. If I never grasped the gravity of that crime, I figured most guys probably didn’t. THAT I can do something about. I can teach the boys. I knew such programs existed, and I knew there was a pretty ugly stereotype of what kind of guys work with them. Teenage Tuff Guy code would not allow the boys to even APPEAR to pay attention to those men. They’d scoff and roll their eyes. They’d act like juveniles because that’s what they are. They’d zone those guys out.

But they’d listen to me.

One of the two things I really hammered in was it’s your duty to believe any woman who tells you that happened to her. There needs to be an investigation before anything happens to the guy, and that needs to be done by the proper authorities. But you believe her when she tells you. The worst thing she can even imagine has happened to her, and who does she turn to for help? She turns to YOU. For whatever reason, she sees safety in you. Be proud of that; I assure you, she isn’t trusting very many people at that point in her life. Don’t you DARE betray her trust. You don’t have the RIGHT to betray that trust. You believe her, you defend her, and you are at her service for as long as she needs you to be period paragraph.

Nothing in this world is more important to me than this issue. Literally nothing. And I know I got through to them; they’d sometimes tell me I did as they were heading to their next class, and they had nothing to gain by doing that. So many of us put serious time in to changing attitudes on this, getting boys to understand that any move after she says no is a genuine and serious crime, not a matter of the woman just “not being in the mood”, and things like what she was wearing and what invitations she accepted are irrelevant. It’s so frustrating to see that being undone by people who put their own agendas first. Believe the Woman means you take her seriously from the beginning. You see to it that an honest and thorough investigation is undertaken, that she is protected and defended, and that any connections he might have never come in to play.

And now I’m seeing signs of people interpreting Believe the Woman as Crucify the Man. I understand the impulse to protect the woman, believe me. I don’t want anyone feeling she isn’t being taken seriously. But when your primary motive is ruining a man’s life, and the woman is just a weapon to you, that’s over the line. But it’s a crime, and you need evidence. In a not long ago case, I’m sure everyone remembers, people were being called some awful, awful names for suggesting there even needed to BE an investigation, like gathering evidence is the same thing as calling her a liar. The more you push to treat accusations as convictions the more you push the needle back to people doubting accusations altogether. Doing that to protect the woman is understandable, but misguided. Doing it for spite or political gain… it takes a profoundly broken and depraved mind to do a thing like that.

Please consider that as you reassure her she’s being listened to. Gathering evidence does her no harm, it makes the consequences stick to him. And if you happen to run across any skeezy journobots or hack actresses who use women at their most hurt for their own personal agenda, turning your attention to them all the way off is always going to be the right call.