How do you spit polish hell and find peace after witnessing the darkness and depravity of humanity? In his new memoir, Senior Chief Petty Officer Builder Bradley D. Genereux, United States Navy (retired) reflects on the inferno of the war in Afghanistan and the healing purgatory of Camino de Santiago.

What is the book A Soldier to Santiago: Finding Peace on The Warrior Path about?

A Soldier to Santiago is an account of my deployment to Afghanistan, the good times, the bad times, and the very bad times. When I retired from the military, the effects the war had on me and the ensuing downward spiral nearly ended in my own self-destruction. Contrasting that, the book is also about the strange circumstances that called me to make the ancient pilgrimage on the “Camino de Santiago” in Spain and the self-discovery, healing, and redemption that took place as I trekked the 500 miles to the end of the earth.

What motivated you to write A Soldier to Santiago: Finding Peace on The Warrior Path?

Just a couple days past Pamplona, not even a week into my journey walking through Spain, I experienced a rare moment of absolute clarity. It felt like a message directly from Saint James himself: I needed to record and to share what happened and what was going to happen as I made this walk that millions of others had already undertaken. I dutifully wrote in my journal, doing my best to record not just the amazing things I witnessed, but also the changes and struggles that happened internally. It’s a deeply personal account, but who am I to argue with Saint James? 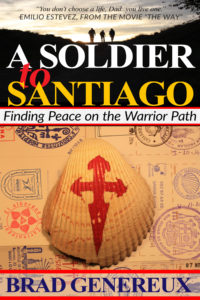 Who will relate to your book?

While I wrote this for my fellow veterans, specifically for the ones who are struggling as I did, it’s something that many may relate to. I don’t believe you had to be in combat to know confusion, to be uncertain of your own identity and self, to lose your perspective and become mired in doubt. I think my sister said it best, “If you’ve ever suffered from the human condition you will find hope in this book.” Those who’ve already walked the Camino will likely appreciate the often-mysterious events and the descriptions of the wonders around every bend.

Why is your book relevant?

A Soldier to Santiago addresses that ugly issue of veteran suicide. While it doesn’t spell it out, it certainly paints a picture of what would likely have happened if I hadn’t heeded the call to walk the Camino de Santiago. The Veteran suicide rate is roughly 50% higher than civilian numbers and that is completely unacceptable. Sadly, the only answer for mental health issues seems to be medication. So instead of treating the actual issue we are drugged into walking zombies to treat the symptom rather than the cause. I realize that much of this is unchartered territory, but there must be a better way to deal with mental health for veterans. As a result of over a decade of military conflict, we have vast numbers of veterans. I believe my story introduces a potential new/old way of dealing with post combat stress. Conflict is as old as mankind, but technology has taken away the lag time in returning from combat to “normal life.” The Camino de Santiago provides a means of processing what took place on the battlefield without going from Afghanistan to Walmart in 24 hours.

What was the hardest thing about writing A Soldier to Santiago: Finding Peace on The Warrior Path?

Finding the courage to share my story; my weakness, my terror, my self-doubt, and the unbelievable and mystical things that happened to me during my journey of healing. I was the typical soldier: I didn’t believe in showing what I perceived as weakness. I had a solid wall built over years of military service that nobody could breach. I compartmentalized myself into different people. So sharing my own disaster when I retired and deconstructing myself was extremely difficult.

What issues does A Soldier to Santiago: Finding Peace on The Warrior Path address that soldiers and veterans deal with?

I believe the biggest takeaway from my story is that you must look deep inside of yourself, to face those demons that love to chip away at your self. That you need to reconnect with humanity and believe in the inherent goodness that is part of human nature. Soldiers and veterans are exposed to the very worst that humans visit upon one another. Brutal violence and unspeakable horrors—it’s easy for those to break out of that tiny box you stuffed them in. If you don’t face them, they will return time and again.

Tell us about your passion to help other veterans struggling with isolation, hypervigilance, nightmares, or insomnia?

If ignored, these symptoms don’t have a happy ending. You can cover them up and hide them for a while, but it’s only a matter of time before they dominate your life and drive you to bad decisions. I don’t care how tough a person is or was, if you don’t deal with those long dark nights you’re in a losing battle. My mission is to find the people who may benefit and find ways to deal with their experiences outside of the typical drug-induced fog. My mission includes taking them on a Camino of their own and to help them find that internal means of coming to terms.

What is the therapeutic value of a pilgrimage?

This is a big question and can potentially have different answers for everyone. The physical aspect is probably the most common value. It’s been proven that the very act of walking increases blood flow, exercises muscles and stimulates thinking. But the Camino de Santiago has much more mystical qualities. There are things that happen that are inexplicable. There’s also the social value. You meet people from every corner of the planet, from every walk of life, from every slice of social stratum. I was humbled time and again by the people who I met and befriended. It’s something you need to experience, as I believe it defies words.

When did you start writing?

I’ve always kept a journal while serving in the military. It’s something that was drilled into me from the very beginning. Seabees “pass the word” in a traditional formal military formation and you are expected to take notes. So, I’ve kept all my “lifer-pads.” Most of the information from the early days are meaningless scribbles, but the further I advanced in my career, the more I had to write. I never in my wildest dreams thought I’d ever tap into them and write a book, but it happened, as surprises never cease to pop up.

Do you read much and who are your favorite writers?

I’m an avid and eclectic reader. I think my favorite book is The Alchemist by Paulo Coelho but I am also a sucker for anything by Dean Koontz. Steven Pressfield did an amazing job writing Gates of Fire. Mark Twain is my favorite childhood author and has some of the most brilliant quotes. Good stuff that I easily relate to. I wish I could have met the man!

If you’re interested in trekking the Santiago de Camino, join Brad in the Spring or Fall. Connect with Brad:

Published by Blackside Publishing, A Soldier to Santiago: Finding Peace on the Warrior Path is available on Amazon.