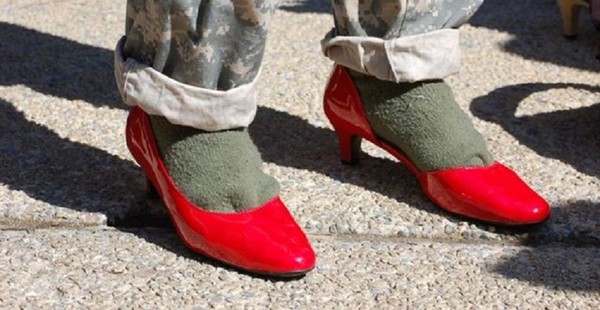 What is it, the Army’s latest decision on changes to the combat or physical fitness uniforms?  Nope, not this time. This time, it’s the decision of the commanders of ROTC units to allow—some say to compel—their cadets to purchase and wear red high heel shoes and step out in support of an event called “Walk A Mile In Her Shoes.”  Oh yeah, and the cadets did it while wearing their military uniforms.

Say what?  Is this Duffelblog’s reporting again?

Sorry, but this one is true.  As reported by the Washington Times and numerous other media outlets across the country, cadets from Arizona State’s ROTC program recently donned their Army Combat Uniforms and red high heels to help raise awareness for sexual assault and harassment.  Temple University did the same thing.

In both instances, claims were made that cadets were “voluntold” to participate in the event, with implied threats of negative marks on their evaluation if they did not.  And before anyone starts bashing ROTC too hard, this kind of thing happens in active duty units as well.

Sadly, there will probably be more attention paid to the fact that the cadets weren’t wearing their reflective belts than the fact that red high heel shoes are not authorized with ANY Army uniform. But publicly breaking regulations is apparently OK as long as it’s done to support pet political projects of the commanders in charge.

Sexual assault in the military is a problem and the Army is right in taking strong steps to root it out.  I firmly support those measures and everyone I know does too.  I also recognize that AR 670-1, the Army’s manual for uniforms, gives commanders wide latitude when it comes to modifying the uniform to accomplish specific missions.  But there has GOT to be a better way to go about it than by blatantly violating Army norms, making male cadets dress in drag in a humiliating public stunt, and grossly oversimplifying a very serious problem.

This event also serves to reinforce false political narratives by framing the epidemic of sexual assault as one in which only women are victims, and all men are potential perpetrators.   Coming as it does on the heels (see what I did there?) of the highly controversial revelation of “white privilege” being taught in Army “diversity training,” it lends credence to those who claim that men in general, and white men in particular, are under siege and increasing seen as the enemy in every real or imagined social ill perceived by the Army.

Another problem with this program is that it continues a stereotype that all women wear high heels, and it equates the struggles of those who are victims of sexual assault with the struggles of people who simply have to walk a short distance in uncomfortable shoes.  That’s not only silly, that’s unconscionable.

By some accounts, more men than women are victims of sexual assault in the military.  So when are we going to see ROTC cadets and members of active duty Army units dress up in kilts and football cleats to “Walk A Mile In His Shoes?”  Right.  We don’t do that, just like we don’t celebrate a “Man Month” or a “Caucasian American Month” in the Army.

It’s a bit perplexing how the Army can, on the one hand, formally forbid troops from supporting something like the ALS Ice Bucket Challenge while in uniform, but somehow an event that involves cross-dressing, male shaming, and blatant uniform violations gets the green light.  Maybe the ALS folks didn’t donate to enough of the right political campaigns or something.  Or maybe, when it comes to making exceptions for political correctness, there is no bar too low.

This whole situation is an embarrassment to the military.  There are plenty of ways in which ROTC programs and active Army units can combat the issue of sexual assault and even Walk A Mile In Her Shoes without compromising our image, our rules, our norms, or our values, or by stereotyping women and completely ignoring male victims of sexual assault.  It is my sincere hope that senators and congressmen start asking some very pointed questions very soon, because the Army doesn’t seem willing to do so.

This article first appeared in The Havok Journal on 24 April 2015.