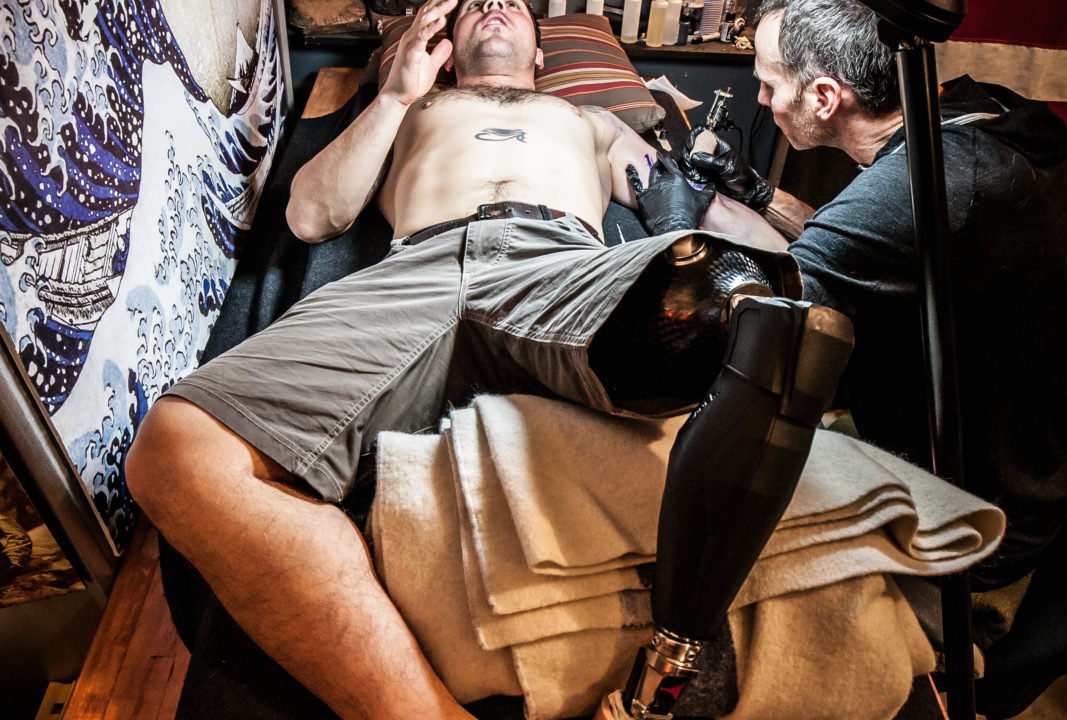 Eagle River, Alaska is suburbia on the Last Frontier. Rows of cookie-cutter houses line quiet streets below the Chugach Mountains. Summer brings barbecues under a nightless sky and winter brings ice-skating and the muffled sound of laughter against the snow-covered paradise. But more is going on in this town—and it happens in the damp darkness of a garage set within those rows of houses.

On most nights, you can find Roger Sparks in that garage bending his six-foot, seven-inch body over a padded table, driving the needle of his tattoo machine into the skin of another combat veteran. He is lost in it—gone—reclaiming his sanity one line at a time. For many years I visited Roger’s garage without ever being the subject on the table—there only to drink beer and watch the process of creation. But tonight I am.

A few weeks ago, I gave Roger my left arm and asked him to do with it as he pleased. “For the advancement of art,” I said.

Roger chose roses, “I have this obsession with the contrast between beauty and horror,” he said.

Black roses, a full sleeve. My own mother proudly proclaimed that black roses in Ireland were the symbol of anti-authority. In that sense, they fit. But the important part is that pain. It forces you to sit there and take it once that first line goes in—you have to confront it rather than shy away—it is catharsis.

The walls of Roger’s garage are covered with his drawings, Hokusai’s wave, a skull vomiting cherry blossoms, a four-foot by four-foot Force Recon flash with bloody handprints fading to brown, and much more. But there is one thing missing—Roger’s Silver Star citation.

If the citation were on the wall, it would sum up an afternoon on a hillside in the Watapur Valley of Afghanistan. It would mention Roger and a CRO—who never received a proper medal and will never say so himself—and it would use hefty language to describe the two men being lowered by hoist into an Army platoon that was being overrun.

The rest is a well-documented and reported history, told many times over by journalists. But the stories, such as this one, usually stop with Roger and the rest of the team being hoisted back into the helicopters and flying away and into the sunset.

They typically leave out the stories of other men on the team in the days before and after Roger’s mission dodging bullets to save strangers; the maintainers patching bullet holes in the helicopters with aluminum duct tape just to keep them operational; Jimmy having the bullet sewn into his scalp and getting back on the helicopter; the FARP stop that gave them front row seats to the hillside they were about to hoist onto—explosions and fire, hell—and they still went.

Neither do the stories ever mention the return to Bagram Air Base after the seven-day Operation Bulldog Bite and the team landing to Good Morning America setting up cameras for a live interview, “I still had blood and feces on my pants,” Roger says.

But behind the Good Morning America crew were two amateur filmmakers and a tattoo artist named Scott Campbell. One of the filmmakers was Casey Neistat and his idea was to film a documentary about tattooing service members straight out of combat.

But after seeing the reaction that Good Morning America received, he decided to pack up and leave. He did not leave fast enough before Jimmy caught sight of Scott’s tattoos, started pulling up shirtsleeves, and eventually invited them into the hooch. Scott tattooed non-stop for three days, handing out ink and pain, bringing the team back down to that familiar level. Roger took more interest than simply receiving a tattoo and Scott noticed. He taught Roger all he could in the short time and upon leaving gave Roger some of his own equipment.

The team spent a couple more months at Bagram, were lectured on uniform standards and the use of reflective belts while walking to chow, returned to combat for short periods of time, and then, one day, it was their turn to board the plane to Manas, Kyrgystan. At Manas they boarded the rotator—a commercial airplane contracted to fly service members back to Baltimore.

“I get on this plane,” Roger says, “and I still have bloodstains all over my pants because I just haven’t been able to wash them off, and I sit next to this Air Force girl that has this pink fluffy pillow attached to her backpack and she smells like potpourri. I couldn’t bring myself to talk to her.”