HomeCultureBooksA Review of “East West Street: On the Origins of Genocide and Crimes against Humanity” by Philippe Sands 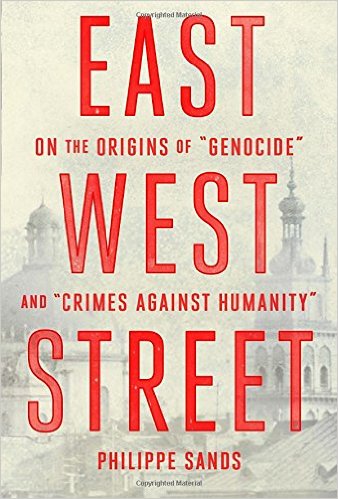 A Review of “East West Street: On the Origins of Genocide and Crimes against Humanity” by Philippe Sands
by Matthew Krause

East West Street: On the Origins of Genocide and Crimes against Humanity is the latest major work by the Franco-British academic Philippe Sands. East West Street explores the origins of the legal terms “genocide” and “crimes against humanity,” and how those terms made it in to the legal lexicon of international law at the close of World War II as the Allied governments grappled with the herculean task of trying to account for some of the most horrible crimes in the history of mankind. 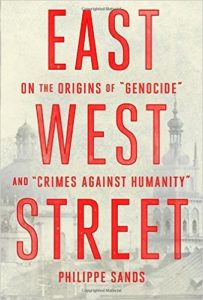 Unlike other works about atrocity crimes that tend to be overly legalistic and frankly pretentious, Sands engages this topic in a fresh, and at times deeply personal way. He focuses on a series of fascinating coincidences involving four individuals whose destinies were intertwined although none of them ever realized it.

First, Sands explores the careers of two prolific international law scholars who rose to fame in the 1930s and 1940s. The Austrian-Polish law scholar Hersch Lauterpacht would be responsible for operationalizing and giving legal effect to the term “crimes against humanity” during the Nuremburg war crimes trials. The Belarusian scholar Raphael Lemkin would in turn invent and insert the term “genocide” into the same war crimes tribunal.

If this sounds too technical or boring for most readers, have no fear. Sands presents both concepts in the context of the crimes committed by Adolph Hitler’s personal attorney Hans Frank, also known as Nuremberg Prisoner number seven, who incidentally was the military governor of the city in which both Lauterpacht and Lemkin studied law. So that the personal nature of the Holocaust is not lost in the mire of legal and historical writing, Sands provides another twist to the story. Sands’ own grandfather was from the same city where both Lauterpacht and Lemkin studied law, and the same one that Frank would rule with an iron fist, eventually exterminating every Jew in the city including the families of Lauterpacht and Lemkin, and Philipe Sands’ own grandfather.

Despite the technical nature of this book, it remains highly readable even for readers with an non-legal background. At times, sections that focused on Sands’ family slightly distracted from main effort of the book, and the work could have been effectively separated into two separate books. Additionally, interjected throughout are tales of heroism and horror, and of incredible humanity counterbalanced by living nightmares. These sections are riveting in their own right, but do very little to illuminate the primary discussion about international criminal law, and often feel misplaced.

East West Street brings up another recurring question about World War II. Why, in the twilight of 2019, do we continue to be fascinated by the Holocaust, and why do writers continue to produce works about the crimes committed by the Nazis? The atrocities committed by fascist Germany are well-documented. Almost all of the Nazi perpetrators from the Holocaust are now gone, so why write yet another book on the subject?

The answer may be found in current events. On September 27, 1979, President Jimmy Carter at the presentation of the report of the President’s Commission on the Holocaust said: “Out of our memory … of the Holocaust we must forge an unshakable oath with all civilized people that never again will the world stand silent, never again will the world…fail to act in time to prevent this terrible crime of genocide … we must harness the outrage of our own memories to stamp out oppression wherever it exists.”

Never again. Yet, since the Holocaust the world continues to fail to prevent genocides and other atrocity crimes including crimes against humanity. Since 1979, Serb forces have committed genocide in the former Yugoslavia, and the Rwandan civil war produced atrocities perpetrated by both sides including a genocide against the Tutsi by the Hutu majority. Horrible crimes have been committed in the Central African Republic, Sudan, South Sudan, and other places. Even as I write this, civilians are being slaughtered indiscriminately in Syria by the Asad regime, and Yezidi and Turkmen captives are experiencing nightmarish captivity by the so-called Islamic State. And yet nations fail to stop it.

With East West Street, Philippe Sands reminds us, once again, why we continue to say “never again.” The Holocaust is that pesky reminder to the international community that it still gets it wrong. Unlike many failed responses to atrocities today, however, Sands also reminds us that once upon a time, lawyers in the governments of the free world did more than just talk, and government agencies produced more than just carefully scripted talking points that fool no one. They took action in the most decisive way and attempted to forge a new legal order out of the furnaces of World War II by creating a system where even the highest ranking members of oppressive governments cannot escape accountability for their actions.

Despite its flaws, East West Street is extraordinarily provocative of thought, and evocative of our collective consciousness. It should be read by all those interested in post-conflict studies, the history of World War II, Holocaust studies, international law, or human rights.

Matthew Krause is an officer in the United States Army. This article reflects his personal opinion, and is not an official position of the Army or the U.S. Government. This first appeared in The Havok Journal January 24, 2019.