Lance Vogeler was on that very same 2006 75th Ranger Regiment BRC team. He was so upset when he didn’t finish, having sustained an injury during training that forced him to withdraw from the road march. His laughter filled the vans during our months of train up. It never mattered that Lance didn’t finish that year. Lance had the courage to toe the line, to begin with. His attempt was a success at its’ onset.

Jay Blessing was an incredibly talented artist. He went to Ranger School, as we all did, and found himself struggling in the Mountains, refusing to ever give up. He finally buckled and they discovered that he had been suffering from pneumonia and a collapsed lung. Back home at Ft. Lewis, Jay recovered slowly under the mentorship of Battalion legend and retired Marine, Mr. Ray Fuller, in the Battalion Arms Room. Jay was exceptional at the task and a sponge. He soaked up every drop of knowledge he could gather from the Legendary Marine and kept the Battalion heavy guns operational.

Jay would not accept defeat and returned to Ranger School, grinding through the suck to reach the “Ranger objective”. His body once again rejected the circumstances, but his resolve rejected failure. Jay limped into graduation with yet another case of pneumonia and lung complications and earned his tab. Mission Complete. He was on his way to the Special Forces Qualification Course when we got alerted for the Winter Strike of 2003. Committed to his brothers, Jay deployed becoming the first casualty of the 2nd Ranger Battalion in the Global War on Terror. 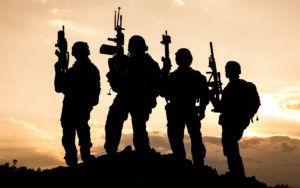 Casey Casavant was hysterical. The man with a smile and personality as large as the Big Sky of his home Montana was incapable of a straight face. He was full of belly laughs and cheer. You could always pick out Casey on an airfield or any other objective. He was the one with a 1-Liter bottle of Mountain Dew in his hand. He used to stuff at least two or three into his assault pack or ruck. When Casey and I attended the Primary Leadership Development Course (NCO Education System 1) with our Ranger Buddies, we felt like strangers in a strange land.

The cadre determined that the Rangers needed to allow our fellow “soon to be Sergeants” the opportunity to lead in the field, un-hindered by our experience or personalities. This was a good call. The solution was each of us “Batt. Boys” would serve as the Radio Telephone Operator (RTO) for every platoon in the field for the whole training exercise. This was a bad call. I cannot recall the specifics of the hilarity that ensued each night, but of one thing I am certain: the evenings full of Batt. Boy Radio hour, verbally thrashing each other and our fellow students and hitting pre-determined bump frequencies so as not to be detected by our instructors, was definitely Casey’s idea! I can hear him laughing from the other side of the Company bivouac now.

James Nehl was simply one of my heroes. When I arrived at the Blacksheep, he was the 1st Squad Leader and I was a Maggot under the leadership of his brother-in-law, Daryl. I was always at a slight distance, but James was quiet and strong; the kind of silent confidence that made you want to be better and win his respect. Growing up 3 squads down the hallways I always took notice of James because he was confident, intentional, and innovative.

Page 2 of 4. Click the page numbers below to read more.