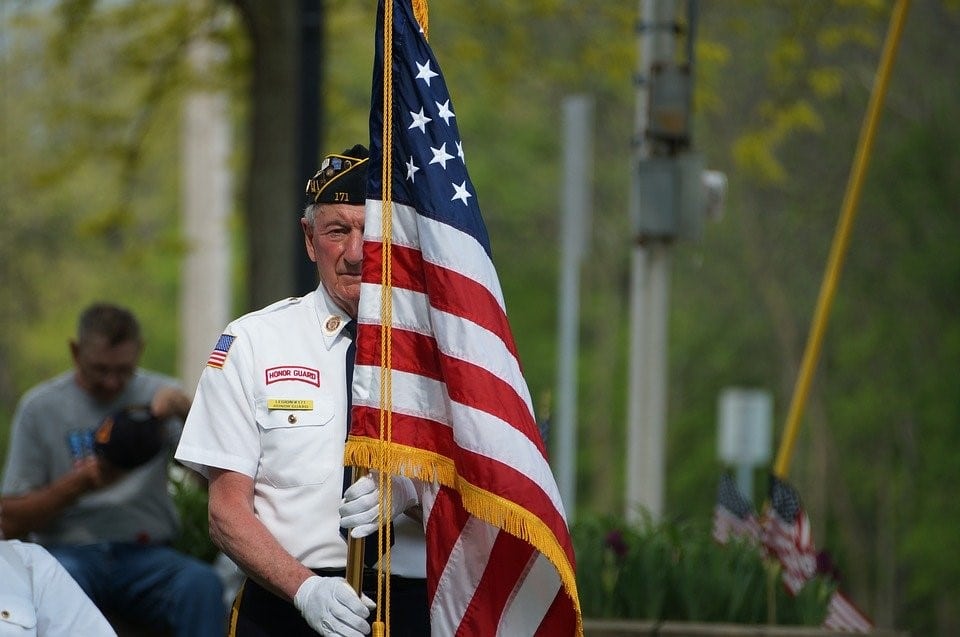 Tandem-jumping into Normandy with Army Rangers who served with my son, Sgt. First Class Kristoffer Domeij, to honor the fallen at the 2019, 75th D-Day commemoration makes this 2020 Memorial Day even more sobering. Our documentary, Here Am I, Send Me, captures what we experienced in Normandy.

Standing on Omaha Beach, where 2,000 U.S. troops were killed, wounded, or went missing, I couldn’t process my emotions. I imagined the terror of those crossing 100’s of feet of beach under intense enemy fire. I imagined the blood and bodies mingling in the salty water of the English Channel and littering the beach. Omaha Beach is five kilometers long. Bound by three-story bluffs, those who survived the beach, scaled those overgrown bluffs.

As I walked through acres and acres of headstones planted in the American Cemetery, I was surprised to learn that this cemetery sat atop a bluff overlooking Omaha Beach, where many of the buried lost their lives. The white Lasa marble headstones left me speechless—9,384 men and four women—killed. Tens of thousands whose child or sibling was dead. A name and hometown were etched on each cross or Star of David facing westward toward home. However, a deeper sadness penetrated my inner being. On 307 headstones of unknown soldiers, these words were carved: “HERE RESTS IN HONORED GLORY A COMRADE IN ARMS KNOWN BUT TO GOD.” I’m thankful that God knows each and every one of us by our names and that engraving reminded me of Isaiah 43:1: “Fear not, for I have redeemed you; I have summoned you by name; you are mine.” I found crosses side-by-side with the same last names and I wondered, Were they family or related? Later, I learned that 45 sets of brothers are buried in the American Cemetery.

The first names on each headstone especially caught my attention. Naming a child is an important and emotional experience in our parenting stories. Sometimes naming a child is no easy task. While God knitted Kristoffer together in my womb, his father, Robert (Bob), and I agreed to name him “Kristoffer Bryan Domeij.” Kristoffer, the Swedish spelling, honored Bob’s Swedish grandfather, and also a talented child who sang in our children’s choirs. Bryan was chosen after our dear friends’, Arletta and Dale’s, wonderful, blonde little boy whom I adored. After Kristoffer was born, his father reconsidered the name we agreed upon: Bob wanted to name him Kristoffer Robert Domeij. And all I heard? Mean kids in school taunting my firstborn—Kristoffer Robin. Nope. Kristoffer Robert—never gonna happen.

My name “Scoti” became an insufferable ordeal from Grade 1 to 12. Classmates snickered and teased me “Dog!” or “Boy!” Mortified, in barely a whisper, I asked the teacher, “Would you please call me Diane (my middle name) instead of Scoti. I dreaded humiliation day—the first day of school. However between, Star Trek’s“Beam me up, Scotty” making it’s way into popular culture, plus being just another name on computer card in college, I embraced my name—Scoti.

Our last names representing a family that we share by birth or marriage is set in stone and not usually a choice. But a child’s given name is carefully chosen with love, and sometimes a bit of parental wrangling. Four months after Kristoffer was born, we finally registered Kristoffer’s birth certificate with the state of California. His full name read: Robert Kristoffer Bryan Domeij.

As I stared at the given name upon each Latin cross or Star of David, I thought about the joy of that child’s birth, and their baptism, christening, or brit milah.  As I stared at each soldier’s first name—special, chosen, and beloved—I wondered about each person’s story buried under the thick, velvet-green, manicured grass. Buried in foreign soil with no family attending their funeral, now only a name engraved in marble marks their lives and sacrifice. Pierre Claeyssens encapsulates a mother’s worst heartache, “To be killed in a war is not the worst that can happen. To be lost is not the worst. To be forgotten is the worst.”

Most Americans don’t realize that Dutch, French, and Belgian families adopt a grave in many European military cemeteries. These families learn their soldier’s history, try to obtain a picture of them, connect with their families, and lay flowers on their graves, because their American family can’t. In 2011, LJWorld reported: “Each Memorial Day for the past 10 years, Franck, his wife, Anne, and their children, Alexandre, 16, and Eloise, 14, have decorated the graves of two American Rangers who died in the D-Day invasion, June 6, 1944.”

And why do Europeans still honor our fallen on Memorial Day? To express their thanks for those who gave their lives so we can live in peace. How about you? What traditions does your family observe to honor and remember our fallen? This Memorial Day, will you stop for a minute or two to remember those who died, giving us the freedom to do whatever we feel like doing or saying?