HomeCultureMilitaryYou Will Always Be A Soldier 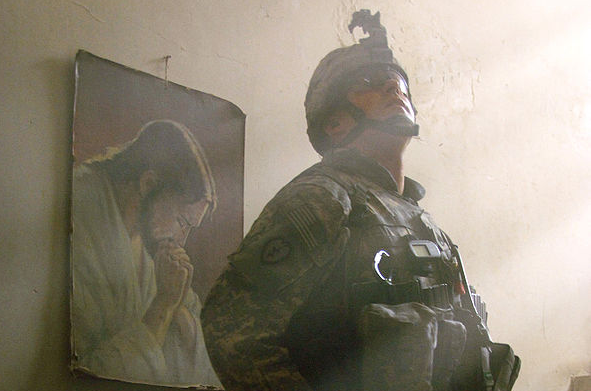 This first appeared in Frank’s blog on April 29, 2019, as “Commitment.” It is republished here with the author’s permission.

Last week Karin and I attended Father Richard’s funeral. He was our parish priest years ago. We sat in a pew with our little grandson, Asher, while Father Richard’s family members wheeled the casket into the sanctuary. Archbishop Listecki presided over the funeral Mass. There were at least twenty priests in attendance, most of them dressed in their vestments. As the archbishop began the liturgy, three things were placed on top of the coffin: a chalice, a crucifix, and the Book of the Gospels. Those objects represented the essential aspects of the life that this priest had chosen.

I looked at the priests gathered at the side of the altar. A phrase popped into my head”

“A band of brothers.”

I know that the term is usually used in a military sense, but I think it also applies to the priesthood. All those priests had committed themselves to a life of obedience and chastity. Through their training and ordination, they had become connected to Christ and to each other in a way that outsiders can never understand.

Forty-two years ago, I was taking a management class at West Point. The instructor told the class,

“I am going to describe an organization to you. I want you to tell me what it is.

In this organization people often wear uniforms. There is a rigid hierarchy and rank structure. A member of this organization can be ordered to move at a moment’s notice. Promotion, if it happens at all, is slow.”

Some of my classmates quickly raised their hands, and said, “The Army!”

The instructor shook his head.

I raised my hand and told him, “The Roman Catholic Church.”

He smiled and nodded.

The Catholic Church and the military share much in common. They are both authoritarian in nature. This fact sometimes offends the democratic sensibilities of our culture, but it is so. I remember when I was on the parish council and Father Richard was our pastor. We, the members of the council, were trying to decide on a policy change for our church. The proposed change was divisive. After a long discussion among the council members, we decided to take a vote. Father Richard looked at all of us and said,

“Go ahead and vote on this, but remember that my vote is the only one that counts.”

A priest is essential to the Catholic Church. A priest, through his ordination, is authorized to celebrate the Mass and consecrate the bread and wine. No layperson can do that. The center of the Catholic tradition is the Mass, and the beating heart of the Mass is the Eucharist. Without a priest, the bread and wine cannot be transubstantiated into the Body and Blood of Christ. Catholicism can’t exist without that transformation.

Years of formation and the sacrament of Holy Orders make a priest qualitatively different from other people. That doesn’t mean that a priest is necessarily better than others in a moral sense. We know for a fact that is not always the case. However, a priest is not one of the boys. He can’t be like everyone else. He is set apart from the rest of humanity, except for his brother priests.

A priest is a pastor, a shepherd of souls, and is often a CEO of a small corporation, the parish church. At least, that is how it works in America. Father Richard was good as an administrator, but his heart was in his spiritual work. He took pride and pleasure in providing the sacraments to his parishioners. He was called to guide the members of his flock to God. His purpose was to serve.

Does a soldier serve? Is a member of the military set apart from the rest of society? When a veteran dies, is his or her funeral the same as everyone else’s?

It is said that a priest receives an indelible though invisible mark upon his soul at his ordination. The person is fundamentally changed. When a person becomes a soldier, are they not also changed in a profound and permanent way?

Thirty years ago, I went on a religious retreat. During a counseling session with a Jesuit, the priest told me,

“You will always be a soldier.”

Priests and soldiers have starkly different missions in life. However, both soldiers and priests make open-ended commitments to a greater cause. That makes us counter-cultural, and therefore we are set apart from the majority of people.

Father Richard was a good man and a good priest. He did his duty, and he did it with love.

“It is accomplished.” – Jesus