HomeCultureMilitary“What the hell? Is this guy the Iraqi Terminator?” 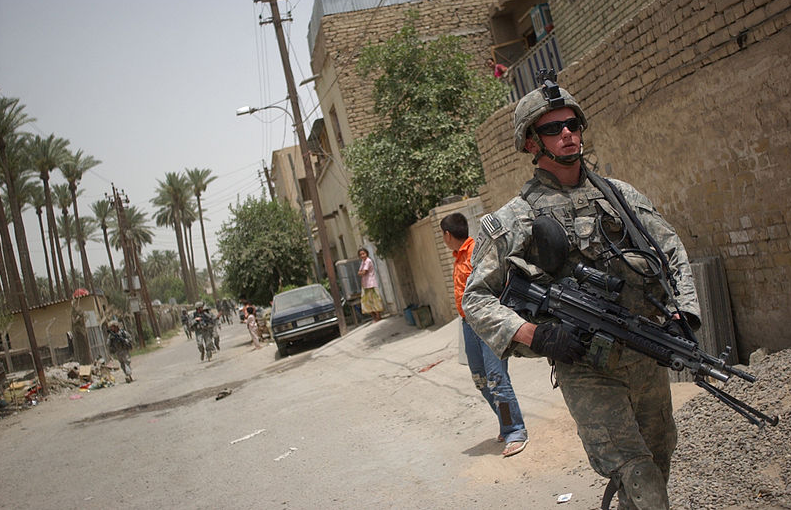 This first appeared in Frank’s blog on July 23, 2022, as “Shooting.” It is republished here with the author’s permission.

Conversations with my son, Hans, tend to follow a familiar pattern. He almost always starts by talking about guns (Hans is a Texan and is by definition a gun enthusiast). By the end of our talk, Hans is telling me about some disturbing and/or absurd experience he had when he was deployed in Iraq. Our last discussion was no different.

Hans began by telling the story of how he and his buddies went hunting for feral pigs several years ago. To the best of my understanding, there is no season in Texas for hunting these pigs. Actually, the state would prefer that people kill the damn things whenever possible. They are remarkably destructive creatures: strong, vicious, and prolific breeders.

Hans was using a rifle with a red dot sight. He spotted a large, hulking animal about 100 yards in the distance. Hans could not make out what it was. He preferred not to shoot a cow. His friend had a rifle with a telescopic sight, so he asked him what the thing was. his buddy said, “Well, it’s not a cow.”

Hans turned down the red dot, and then immediately let off a round and hit the beast. Hans’ companion did not appreciate the fact that Hans fired his rifle without warning. Neither of them could see the wounded animal, so they, along with another hunter, drove through the fields to look for the pig. They found the boar in a mud hole where it had been wallowing. Hans had shot it in the spine.

Hans’ buddy took out his 9mm and started firing at the pig from a short distance. Hans told me, “The guy missed the pig five times. I finally told the guy, ‘Give me the gun, you idiot!’ I don’t know what was wrong with him. I know the pig was still moving around and making a racket, but it was hit in the spine. It wasn’t going to go after the guy. I took the 9mm, went close to the pig’s head, and killed it. I mean, shit, just end it.”

The conversation inevitably drifted from there to Iraq.

Hans told me about being designated as a marksman on the caiman. He took a drag off his cigarette and said, “We were shooting at these guys coming at us from across a field. One of these poppy-leaf-chewers was so high, he couldn’t feel nothing. I shot the guy in the shoulder, and he just shrugged and kept coming. I shot again and he went down. Then this guy got up again. I hit him one more time, and he went down. He got up again. I thought, ‘What the hell? Is this guy the Iraqi Terminator?’ I kept firing at him, and I was about ready to tell the machine gunner to light his ass up. I finally stopped him. I must have used twenty rounds.”

Hans went on, “I always had a magazine full of tracer rounds for whenever we went on night missions. Then I would take some tracers out and put them in another magazine with regular rounds. I would space them out every three or five rounds.”

“Well, we went on a night mission, and we were firing back at some bad guys. I fired once:”

“I set that field on fire. I caught shit for that. Well, it didn’t matter, we knew they were bad guys. We could see the muzzle flashes from their guns, and we could hear the ‘thump’. They were firing AK 47s. Those things go ‘thump’ when you fire them. You can tell that sound. Our rifles go ‘ptui’.”

Hans took another drag. He said, “One time, these National Guard boys started firing us up. It was good that we were all in the truck. And it was during fucking daylight. How could they not tell an MRAP from a…a…well, from whatever the bad guys drive around? We couldn’t call them. They had the wrong week’s fill in their radios. “

“The grenadier shot a flare round toward their vehicle. That got their attention.”

Hans put out his cigarette stub and smiled.