HomeCultureMilitaryUSMC Marksmanship… and Why It’s Better Than the Army’s 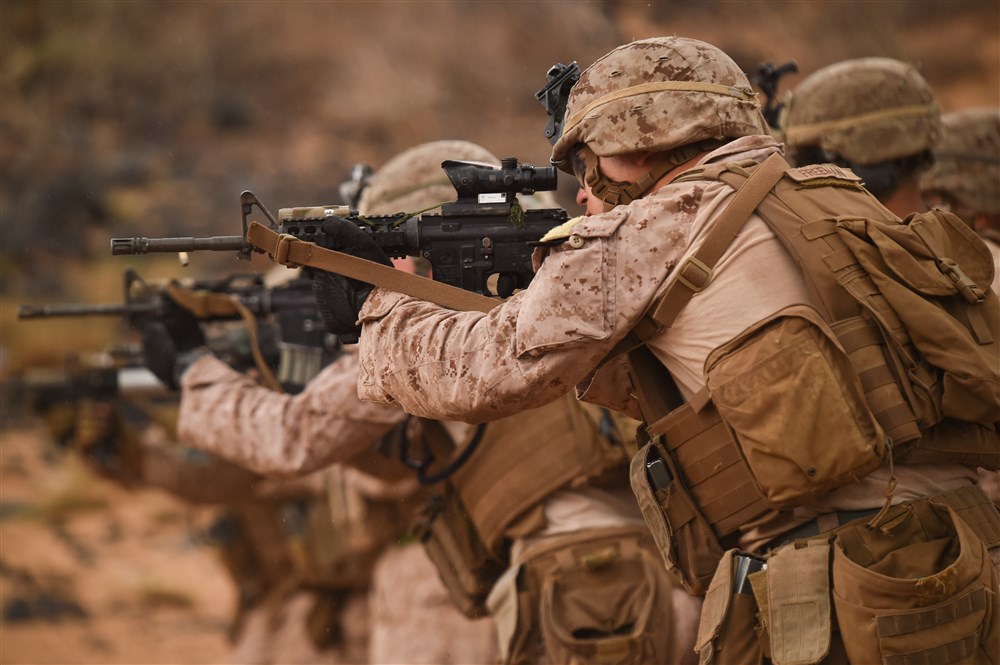 USMC Marksmanship… and Why It’s Better Than The Army’s

This first appeared in The Havok Journal September 22, 2018.

Evidently, the U.S. Army has a marksmanship problem. The problem being, roughly, soldiers can’t hit the broadside of a barn with their rifles. My good friend Kevin Wilson recently wrote an article and pointed out that just giving soldiers a better rifle isn’t going to get them to shoot better. So, what’s to be done?

There’s really no question the Marine Corps puts an emphasis on marksmanship. And, yeah, a Marine making jokes about shitty Army marksmanship is pretty low-hanging fruit. So instead of jokes, here are some thoughts my Army friends might want to take to heart when considering how to improve marksmanship in the Army.

What sets Marine Corps marksmanship apart is simple, marksmanship is a fundamental part of Marine Corps culture. The other differences between Marine Corps and Army rifle training, and there are some real differences, are a product of that culture.  Things like shooting at greater distances than the Army, shooting from more positions than the Army, and ensuring all Marines (including POGs) go through basic infantry instruction, are all a result of a mindset that every Marine must be ready to face combat, regardless of their MOS. Due to this mentality, good marksmanship is both socially mandated and required by regulation.

Marksmanship is an essential part of our identity, beginning with Marines’ role acting as marksmen on sailing ships, sniping the enemy from high up in the riggings. Marines like to say every Marine is a rifleman. Obviously, this isn’t entirely true, there are plenty of crappy shots in the Corps. But, unlike in the Army, being a crappy shot is something to be truly embarrassed by. As much as being a fat-body. Or, a sailor not knowing how to swim. Or an Air Force officer not knowing how to play golf. Being intimately familiar with your rifle starts in bootcamp; in fact, the rifle a Marine recruit is issued at the beginning of bootcamp is the same rifle that recruit uses to qualify on later. And it goes further. We all know that scene in Full Metal Jacket where the recruits march around in their underwear in the squad bay singing “This is my rifle, this is my gun,” right? Yeah, that (or something similar) actually happens sometimes in bootcamp. My Drill Instructor even encouraged us to name the rifles we were issued at the beginning of bootcamp, life imitating art, perhaps, but an excellent example of the emphasis the Marine Corps places on making handling the rifle second nature. 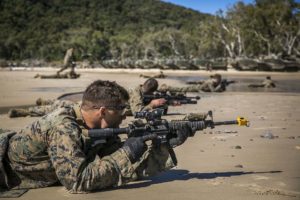 Every Marine recruit is drilled with the basics of marksmanship. Right from the very beginning of a Marine’s enlistment recruits are taught things like sight alignment/sight picture, proper cheek/stock weld, natural point of aim, breath/trigger control. Now, I’m not saying the Army doesn’t teach the fundamentals, I’m just saying it’s a matter of real study for Marines. A Marine is expected to know how to read the wind strength and be able to adjust the dope on his/her rifle accordingly, no Kentucky windage allowed. Recruits literally spend dozens of hours simply practicing dry firing and practicing their aim on barrels, before they even get to the range.

But it isn’t just an issue of not wanting to be embarrassed by having to wear a badge below Expert. Unlike in the other branches, marksmanship matters in terms of professional advancement. A Marine literally can’t get promoted if they don’t have a rifle score in the system every year, and they can’t get a rifle score unless they achieve a minimum qualification on the range. Qualifying Expert isn’t just a matter of bragging rights or having a cooler badge to put on your uniform, not qualifying at all means a Marine could get kicked out of the Marine Corps, same as if they can’t make weight, pass the swim qual, or pass the Physical Fitness Test.

Making being a basic rifleman a part of the Marine Corps culture isn’t limited to just the Known Distance range, though. POG Marines spend an extra month after bootcamp learning basic infantry skills. Patrolling, fire team rushes, squad-level attacks, platoon-level assaults on an objective. MOUT. Learning how to set up fields of fire for a defensive position, proper channeling techniques. All Marines become familiar with basic infantry weapons like the AT-4, the MK-19 grenade launcher, the M2 50 cal, the M-240 Golf medium machine gun, and the SAW.

Now, do Marine POGs become experts on any of these systems? Of course not. The training isn’t intended to make admin clerks into infantry, it’s intended to make sure that if the shit really goes down in combat, any and all Marines have real training to fall back on. It’s intended to give every Marine a rifleman’s mentality, regardless of what MOS they’re in. These are the basic standards that ALL Marines are expected to meet.

If the Army wants to improve the marksmanship capability of its soldiers, and thus increase their survivability in combat, it doesn’t need a new rifle. The Army needs to raise the bar. Make the fundamentals of marksmanship a part of Army culture, and watch how the quality of soldier improves across the board.