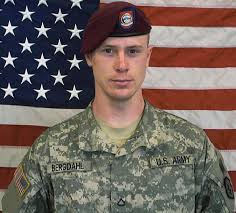 In a country currently caught up in the Olympic spirit and perpetually divorced from its military and the wars fought on its behalf, it’s easy to lose track of individual US service members, especially those missing in action. In fact, if you ask Americans right now about a captured service member in Afghanistan, they’ll probably think you’re talking about a British military working dog and not US Army Sergeant Bowe Bergdahl.

I thought I’d take a moment to share my thoughts about Bowe Bergdahl and outline what I know, what I don’t know, what I think, and why it all matters.

This is what I know:

On 30 Jun3 2009, then-Private First Class Bowdrie “Bowe” Bergdahl, 23, was captured and imprisoned by the enemy in Afghanistan. For reasons that are still not entirely clear, Bergdahl departed his forward operating base in the restive Paktika province along the Afghanistan-Pakistan border, and quickly fell into the hands of the Taliban and was then passed along to Pakistan’s ruthless and highly-lethal terrorist proxy group, the Haqqani Network. He has remained in terrorist hands ever since. Bergdahl has appeared in a half dozen or so terrorist propaganda videos, extolling the virtues of his captors and condemning the US-led effort in Afghanistan. Efforts for to effect his recovery or to negotiate his release have thus far proven fruitless. Demands for his release include the payment of $1 million and the release of high-level Taliban prisoners, some of whom are interned at Guantanamo Bay. As is standard practice in situations involving prisoners of war, Bergdahl receives regular promotions and continues to accrue pay and other benefits. He now holds the rank of sergeant in the US Army.

This is what I don’t know:

Why did he do it? In light of the available evidence, it appears likely that he deserted the US Army by abandoning his place of duty, leaving behind his weapon and most of his equipment. One possible explanation is that he intended to either hike his way into Pakistan and seek asylum, or, a less likely but still plausible explanation might be that he deliberately switched sides. There is also the very remote chance that he was legitimately captured by the enemy, possibly through some kind of elaborate ruse, although at this point that seems highly unlikely.

This is what I think:

I think Bowe Bergdahl willingly deserted his post, and was subsequently captured and imprisoned by the enemy. I think it is likely that Bergdahl is a deserter, and at worst an outright traitor. I think that at best, he is (or at least was) hopelessly naïve and is paying for it an extremely unfortunate way. I also think that right now, none of the above really matters, because right now it doesn’t matter what I think about Bowe Bergdahl as a person. There are things that matter more.

One of the things I think matters more is values. In the profession of arms, we don’t leave people to rot in the hands of the enemy, even when we think they might deserve it. We don’t allow them to be used as bargaining chips to adversely affect the prosecution of a war or the implementation of a suitable peace. We don’t allow them to be used as pawns to secure the release of terrorists whose sole aim in life is to return to the battlefield where they can attack American interests and kill American citizens. Our Warrior Ethos does not carry the caveat, “unless we don’t like the guy.” http://www.army.mil/values/warrior.html

Our Army and our nation are values-based organizations. Our values are perhaps best represented in the men and women in uniform who ensure our freedoms and protect our way of life. Even if he did do something deserving of punishment, Bowe Bergdahl has already spent more time in prison than Bradley Manning has, and more than Edward Snowden probably will, in far worse conditions than those two men certainly will ever endure. If Bergdahl did in fact desert, if he has in fact been aiding the enemy as alleged, then he needs to answer for those crimes. But it needs to be done after a trial in a US court, and any sentence carried out by the US judicial system. We don’t even allow the International Criminal Court to put our troops on trial and mete out punishments to them, and we definitely shouldn’t allow the Taliban that privilege.

There will be a time and a place for assigning blame and calling names. That time is later. Right now, it’s time to bring US Army Sergeant Bowe Bergdahl home. Those are not things I “think,” these are things I “know.”

Like many people reading this post, I spent a good portion of my last tour in Afghanistan trying to find Bergdahl. It was, in fact, a specified additional duty for everyone I worked with. I’ll be honest, after I learned the facts of the case, I became greatly annoyed and considered the search for him to be a distraction from the “real” war we were fighting to salvage our nation-building effort in Afghanistan. This was because, like many people who studied the facts we had available at the time, I kind of thought he deserved it. But now, looking back at the facts with a few more years under my belt and a little less Afghanistan under my feet, I feel differently.

I don’t think Bergdahl is innocent and doesn’t deserve to be punished; based on the evidence available to all of us through open sources, I think it’s logical to assume that Bowe Bergdahl is a bad soldier. In fact, he may even be a bad person. But until he is back in the US, we don’t know for sure. And until he is back in the US, he will continue to be used and exploited in a way that is against our values and is contrary to our national interests.

Given all of this, we need to put real pressure on the terrorist proxy groups holding Bergdahl and on their state sponsor, Pakistan. We should start by completely cut off the $1.6 billion dollars in extortion money… sorry, I mean “foreign aid” that we’re bribing Pakistan with until they convince the group responsible for holding Bergdahl to let him go. We should also step up kinetic strikes against the groups holding Bergdahl. “But what about the peace negotiations?” Newsflash: the people holding Bergdahl are utter irreconcilables. They don’t want to be part of the peace process; peace takes away their raison d’etre. Besides, they know they can wait us out, which means they win. So why should they negotiate?

The Haqqani Network and related groups are ruthless bastards, but they’re not stupid. If they knew we were serious about getting our guy back, they’d find a way to make it happen. We just lack the national will to give them serious incentives. Maybe it’s because we’re too focused on things that Americans really care about, like overflowing toilets in the Olympic Village.

And this is why US Army Sergeant Bowe Bergdahl still matters.