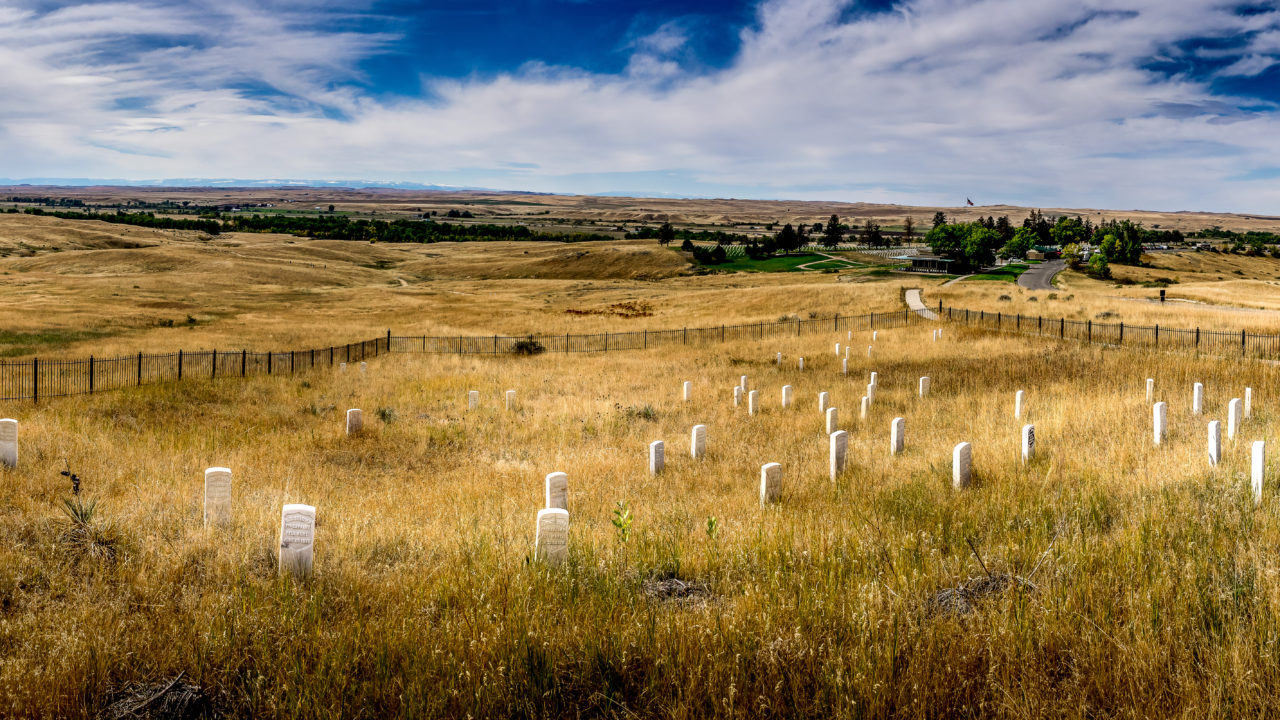 This first appeared in Frank’s blog on May 15, 2019, as “Little Bighorn.” It is republished here with the author’s permission.

The GPS initially was taking us south on I-90 toward Sheridan, Wyoming. Then it told us to turn off the freeway and take US Highway 212 instead. The exit off of I-90 took us right to the entrance of the Little Bighorn Battlefield National Monument. Karin wanted to see it. I didn’t. We went to Little Bighorn.

I wasn’t very interested in seeing the battlefield. I have seen battlefields before, and generally, they just look like ordinary fields or woods. After a while, all the evidence of violence fades or rusts away. Little Bighorn is like that. The monument covers 765 acres of rolling hills that look just like all the hills that surround them. The land is covered with tall grass and clover. There are occasionally small yellow flowers that keep the butterflies and bees busy. Snakes like this place too. Far off in the distance, a person can see snow-capped mountains.

Little Bighorn is home to a national cemetery. It also has a small visitor center. Most of the monuments can be viewed within an hour. The visitor center is located near Last Stand Hill. Karin and I walked up the trail to Last Stand Hill. On top of the knoll is a granite memorial dedicated to the soldiers of the 7th Cavalry. The names of the fallen are inscribed in the stone. Under the massive monument lie the bodies of most of the fallen soldiers and civilians who were part of the 7th Cavalry on that fateful day in 1876. Many of the officers’ bodies were eventually re-interred elsewhere. Custer’s body is lying under the ground at West Point, his Alma Mater, and mine.

There are numerous white stone markers scattered on the hill and throughout the local vicinity. These stones show where soldiers fell during the battle. Many of the markers have the name of the deceased written on them.

I felt a slow anger welling up in me as I looked at the memorials on Last Stand Hill. It was all about the white guys. There was even a memorial for their horses. I didn’t see anything there that made mention of the Indians who fought and died in the battle.

I told Karin, “I don’t like it here. It feels wrong. It’s just about Custer and the soldiers.”

We walked along and saw two red stones near the path. They showed the place where two Cheyenne warriors died in the fight. My mood lightened a bit.

We walked a little further and found the Indian Memorial. I wasn’t even aware that there was such a thing. The Indian Memorial is built into the hill in the form of a circle. It’s not obvious at all, and could easily be missed. This is in stunning contrast to the memorial on Last Stand Hill, which is totally in your face.

We walked into the circle, and we saw the Indians’ story of the battle written on the stone walls. One portion struck me deeply. Carved into the rock is a picture of Custer speaking with the Indian leader, Stone Forehead, in 1869. At that time, Custer promised, “I will never kill another Cheyenne.”

Stone Forehead replied to Custer, “If you break your promise, you and your soldiers will go to dust like this.” And so it came to pass.

I suddenly felt sad, sad to the point of nausea. I sat down on a ledge on one side of the circle.

I don’t know why. It all felt tragic and pointless.

Karin came back from taking some pictures. She stared at me for a moment. Then she said, “Maybe we should go now.” Karin drove us back to the highway.

I told her, “It was a good idea to stop at the monument. It was worth doing.”

She kept driving. She said, “I’m sorry that going there made you cry. But, I’m not sorry that we went there…” She paused a moment, and continued, “because now I know that somebody cares.”