It has been 6 years since I went to Afghanistan. I still think about it every day. 30 years spent on this Earth. 26 of them in South Central Michigan, 4 years as an Officer in the United States Army, with 9 months in Afghanistan as a Route Clearance Platoon Leader and Sapper Company Executive Officer. And of all that time, when I find myself with a minute to reminiscent, or dwell on the good times or what could have been, it rarely ever goes to my childhood spent on dirt bikes or at the lake, or family vacations, or fun times in college, or even my own children’s birthdays or camping trips.

It always goes back to the Army, to Ft Lewis, to 562nd Engineers, to Afghanistan, to Frontenac. Why?  I have a beautiful wife, 3 healthy wonderful children, house with a little bit of land, a steady job making decent money, a nice truck, good community, a great church I attend, lots of family close by. And almost daily, back to deployment.

I loved it. I loved my one, single, short 9 month deployment. I loved mission prep, I loved being on the road, I loved rolling back into Frontenac after 2 or 3 days, dusty, dirty, always dragging a few vehicles, some bumps and bruises across the platoon.  I loved the lush green of the Argandab contrasted with the stark, barren wasteland that was just a stone’s throw from the river.  I loved it my platoon, my soldiers and NCOs. I loved chewing other Lieutenants’ asses. I loved 1SG Kelly. Always will. 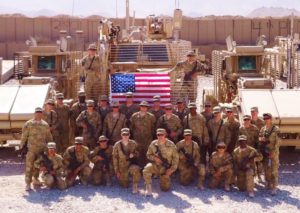 My brother platoon leaders and I still get together yearly, even though we are all over the country. I loved stopping of too see them at other FOBs. I loved KAF runs, and stopping at roadside stands for fruit. Eating at other DFACs on other FOBs. I got hooked on being in the zone on an objective, whether it was an IED find or a strike. I loved stopping at the SF compounds and seeing how they lived and fought. I am still jealous of those guys. The story of when Frontenac was over ran by 8 insurgents, and I ended up defending the motor pool by myself the whole attack, is a story 4th Platoon will tell for decades to come. I am always thankful all my Platoon made it home to their families.

It makes no sense, the feelings I have. But the last 5 years, since I hung up my uniform, they are always there. And I read it again and again, so many guys and gals never let it go. They live that time forever, and love it forever. That is all they seem to be proud of, and what they always seem to hang their hat on. But it can’t be that way. 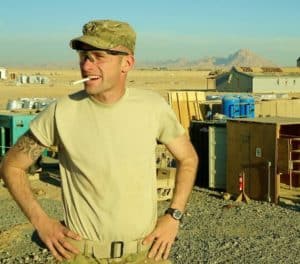 I currently have the privilege of running a retirement center back home in Jackson, MI. With 115 residents, we have had as many as 28 Veterans at one time, WWII and Korea era Men and Women. I have known and loved them all. Tank Drivers from Battle of the Bulge, a European-theater Ranger with a Silver Star, an Infantry man who hit Normandy on the second day, an infantry squad leader in Korea, a B17 Pilot, a grumpy “Chief” of the Frozen Chosin.  The list goes on. The greatest generation, many who went through more than present day service-members could imagine. But it is no big deal to them. It just was then, and this is now.

And one of them, Charlie Lobdell, had story after story of his time in the Pacific Theater as a truck driver in WWII, if you could get him going. I normally could with a “Hey Sarn’t Lobdell.” For it was rare he would bring it up. I will never forget, before he died, telling me one day, “Everyone always makes a big deal about it. But it was just a chapter that closed long ago. A good one, but a closed one.”

Lately that has been my mantra when I spend too much time dwelling on what was. It was just that, a chapter, a building block for the rest of my life. One always fondly remembered, and proud to have written. It took Charlie Lobdell, and on social media with The Havok Journal and a Gallant Few, to help me see that. To see that my short time in uniform is not what defines me, but rather is something to build on, something that helped shape me and will continue to. It is a finely written chapter of my life, one written with Warriors. I hope that my Soldiers in 4th Platoon have found something else to pour themselves into instead of being stuck in the past. A “second mission.” Something to give that passion to what is and what can be, instead of what was. To not just be proud of what they did while in uniform, but to be proud of how they are continually making the world around them a better place.

This first appeared in The Havok Journal November 12, 2018.