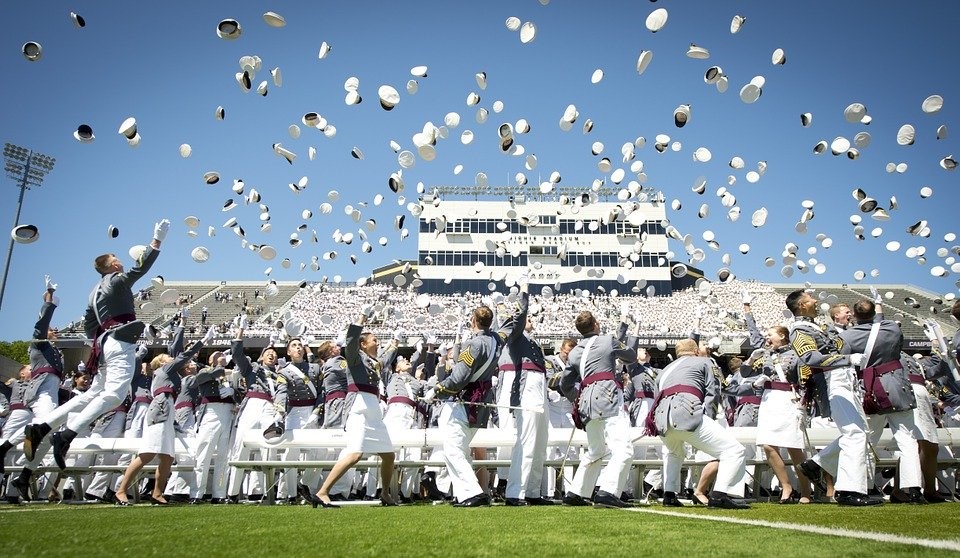 Response to West Point Graduate Coalition on Political Message Sent to Class of 2020
by James A. Gagliano

In advance of the president’s visit on Saturday to our nation’s oldest military academy in order to deliver commencement remarks, a self-described “diverse group of West Point graduates” — calling themselves “Concerned Members of the Long Gray Line” — penned an open letter to the graduating class of 2020.

I was not asked to sign the letter. I stumbled across it online. Scanning the list of some 700 endorsers, I immediately recognized many names across six graduate decades. The list of signatories has now grown to over 1,000, as news of letter’s existence spread and numerous media outlets smugly leveraged the opportunity to highlight newsworthy criticism of a president the industry almost universally loathes. The graduate coalition – wittingly or unwittingly – supplying ample political fodder for the opposition party and the members of the #Resistance.

That may not have been their intent. And affording a generous benefit of the doubt – maybe the attestors didn’t feel they were taking a partisan political stance with their offered advice and guidance to West Point’s latest class of graduates. But this wasn’t a well-considered effort. It selfishly stole the spotlight from the class of 2020. And it certainly wasn’t apolitical. And during such polarizing times, it helped to further divide a country already steeped in unrest and turmoil.

I’ll explain why shortly. But first some context:

As a member of West Point class of 1987, I have a bit of skin in the game. My father graduated with United States Military Academy class of 1960. My nephew, still serving as an Army Captain, is a proud member of the class of 2013. My family’s U.S. Military lineage dates back to the Civil War. My maternal great-great-great-grandfather served in the New York State Militia for the Union and fought at Gettysburg. Both my grandfathers served in World War II; one also during the Korean War. My father served in South Vietnam from 1966-1967.

I share this backdrop as emblematic of my appreciation of the sacrosanct civil-military relationship that our 244-year old country relies upon. The president, an elected civilian, has always served as commander in chief. And though presidents and senior military leaders can disagree – see Truman/MacArthur and Obama/McChrystal — the commander in chief acts as the final arbiter in strategic decisions. He is the boss. This is why we have elections every four years.

West Point graduates no longer serving in the U.S. Army also have every right to speak their minds. The mission of the Academy is to train “leaders of character committed to the values of Duty, Honor, Country.” West Pointers are certainly no monolith of ideas, opinions, and positions. And while I vigorously disagree with the direction the letter co-signers chose; they certainly have every right to their opinions and preferred method of communicating the same.

But just because you can do something doesn’t mean that you should. And to pretend that this coalition has no axe to grind, no selfish, political agenda to promote is being willfully ignorant or purposely blind.

Two class of 1969 Vietnam War veterans, John Lucas and James R. McDonough described some of the coalition’s signatories in a blistering rebuttal published in The Federalist:

[We] will not try to characterize each person. But we know something about many of them. Some are Democrat politicians. Some are self-styled members of “the Resistance.” At least one was booted out of the Army early.

Some are blatant hypocrites. We know that because while proclaiming their courage and what they say is their “lifetime commitment is [sic] to the enduring responsibility expressed in the Cadet Prayer: ‘to choose the harder right instead of the easier wrong,’” they were too cowardly to sign the letter. Fifty-nine [at time of publishing] identified themselves only as “Anonymous.” 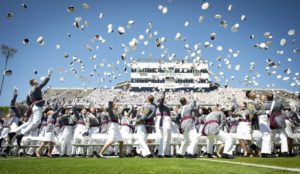 Other disappointed, or angry, graduates have spoken out – across different mediums – in opposition to the letter. The consistent theme appears to be the wholly partisan, political tone.

And though I know personally, and deeply respect, many of the signatories, their preferred route has sowed division in the ranks of The Long Gray Line, helped diminish the commander in chief who will be sending the 2020 graduates into harm’s way, and heaped some unfair imputations on members of USMA Class of 1986 currently serving within President Trump’s administration.

The letter is also rife with inaccuracies. I do not know who drafted it. Every signatory certainly didn’t weigh in with preferred verbiage. But by affixing one’s signature on a document that was going to receive national attention means each graduate who signed onto it also owns it.

That is, except for the anonymous endorsers. For them, I have nothing worthwhile left to say.

But for those who had the courage to attach their names to the letter – we can respectfully agree to disagree.

One morning shortly after the letter was published, a classmate who was part of the coalition and I spoke about our interpretations of the letter. This person is a servant-leader, a patriot, someone I deeply respect, and for whom I maintain an abiding affection. We discussed, debated, argued, and still came away with an appreciation for each other’s positions.

This classmate inquired as to what I felt was inaccurately portrayed in the letter. I pointed out that the president has been rightly criticized for reckless hyperbole and mischaracterizations. The leader of the free world has immense powers. Every quote, quip, or tweet can potentially impact markets and engage the nation in war. West Pointers are held to that same standard. And when the author of the letter included the horrific slaying of George Floyd at the hands of four – since charged with murder — police officers in Minneapolis, it was done for an unseemly purpose.

Every black person is not responsible for the conduct of a single black person. Every cop is not responsible for the abhorrent conduct of an infinitesimal number of bad actors in their profession. But including issues of racial injustice and police brutality in the letter was either breathtakingly tone-deaf or had a sinister purpose – assign responsibility to the commander in chief. But the letter even goes a step further with an outright gaslit, manipulation of fact:

Sadly, the government has threatened to use the Army in which you serve as a weapon against fellow Americans engaging in these legitimate protests.

Wow! Where is the honor in that distortion? Absolutely no one in the administration has called for employing the U.S. Military against peaceful protesters. Loath to hurl the accusation — but how is it not an outright untruth? Let’s politely assess as mischaracterization or distortion of fact.

It is also profoundly hypocritical of former U.S. Army Officers to pretend that former presidents didn’t make decisions that many of us felt were antithetical to our personal or American values. But our job was to serve – no matter our opinion of the elected at the helm. So long as the command was lawful, we were dutybound to salute the issuer and accomplish the damn mission.

How many of us West Point graduates were wholly disheartened and disturbed by President Obama’s 2009 three-continent “apology tour” for America’s history that even offered humiliating, debasing contrition for two-centuries-old conduct and promulgation of the Global War on Terror?

Though many of us griped about it at the time, no penned, attention-seeking open letter to the class of 2009 advising how newly-minted second lieutenants should view their commander in chief and his administration.

How about the consistently dismal approval ratings afforded Obama by the troops? In late 2014, 15% of active-duty servicemembers viewed him favorably. This concerning lack of trust and confidence in their commander in chief’s fitness didn’t result in a graduate coalition addressing this via partisan letter to the class of 2015. In 2017, Obama left office still embarrassingly underwater in opinion polls of the military men and women he led and ordered into battle.

I have exhausted my search engine and still cannot find a related Academy graduate open letter.

Some have also argued that President Obama violated Article I, Section 8, Clause 11 of the U.S. Constitution with his unilateral decision to conduct military operations in Libya in 2011, bereft of Congressional consent. Again, no gaggle of furious West Pointers drafted a condemnatory letter.

Ah, but these are different times, right? No, not really. Our nation has survived civil war, the heinous institution of slavery, a global threat of fascism, and plenty of unrest and turmoil. What remains constant is the blessed institution of the U.S. Military. We expect and demand young West Point graduates to filter out the noise and the distractions and honor the Academy creed.

It is just disappointing when some of our very own have contributed to the noise and distractions.

He is a recipient of the FBI’s second-highest award for valor, the Medal for Bravery. Now retired from the FBI, Jimmy serves as an Adjunct Assistant Professor, instructing undergraduates in Homeland Security, Criminal Justice, Military History, and Leadership courses at St. John’s University in Jamaica, Queens and is a leadership consultant with the Thayer Leader Development Group (TLDG) located at West Point, NY. He is also a full-time Law Enforcement Analyst, CNN Contributor, and delivers speeches across the country in corporate and university settings.