HomeCultureMilitary“Raise the Black”: An Auction for Iraq’s Special Operations Forces 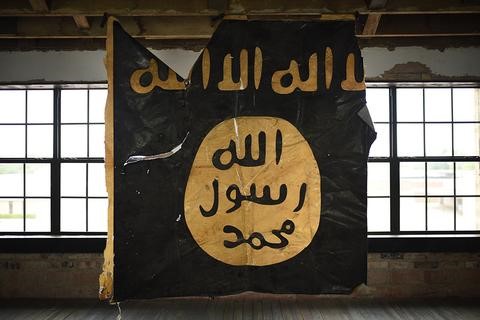 “Raise the Black”: An Auction for Iraq’s Special Operations Forces
by Bryan Meyers

But it’s far more profound than that.

To some, the music stops.

Whether by being unplugged by the ever-changing arm that makes up U.S. foreign policy or by a hand that was long ago burnt out on the bullshit.

It was both of them.

For years I wandered. Lost. A rōnin in my own right.

Fist in the air and a finger to the sky, laying on a plastic floaty in the middle of the pool in the backyard of the house I rented after taking a government contract.

Why am I alive and not them?

What was the point?

Why don’t they listen?

You know what? Fuck them and their fucking bullshit politics!

My usual spiral into oblivion before pulling myself together for work the next day at my cushy bullshit job – contracting for the government.

Months later, I am sitting in an office with my boss – my best friend that I have known for about a decade. I need to tell him something.

“Hey man, I have a chance to move to the Emirates for a job. I’d be teaching high-school kids military, police, and life skills. I think it would be a nice change of pace for me. I don’t know what to do as I feel that if I took it, I’d be bailing on you and the company. Thoughts?”

“Look, man; you aren’t bailing on anyone. Things are getting tight here and if anything, cutting your salary would only help. I can’t tell you what to do, but I do think it would be good for you.”

A couple of months later I was on a plane to Dubai.

I was back in a foreign land, and I felt like I was home.

After a few weeks of figuring out my new job, getting accustomed to the daily grind, I began to explore. With a few new good friends and the freedom of a job that paid gangster money with banker’s hours, I took to finding my way.

Before too long, I was loading up my Rover and heading through Oman aiming to get to the Yemen border. The plan? To help the refugees fleeing the then-new Houthi rebellion. And yes, that was the extent of it. No CONOP. No 100 slide PowerPoint awaiting approval from a man sitting behind a desk that learned about war by reading AAR’s – you know who you are.

That feeling of absolute freedom as the customs agent checked my visa and vehicle insurance at the Oman border cannot be described in words. I was hooked.

I blew through money like a stockbroker went through blow in the 80’s.

My powder of choice? Philanthropy.

But, I now knew my path.

Since the Oman trip, I have traveled the world helping others. From fighting ISIS’ human trafficking in Libya to building villages in Nepal, I was out there.

It is on this path that led us here.

So what’s on the block?

A flag sold by a company we started to raise money for the families of fallen Iraqi Special Operations Forces (ISOF), flown inside an aircraft over Mosul prosecuting targets while I was linking up with my former ISOF brothers on the ground. 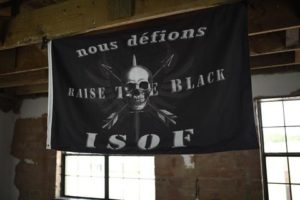 A captured ISIS banner that was given to me by a medic I met in a makeshift clinic near the front lines of the battle for Mosul where we worked on a pair of civilian children caught in the middle of the chaos. Acquaintances through volunteering, now close friends through tragedy. 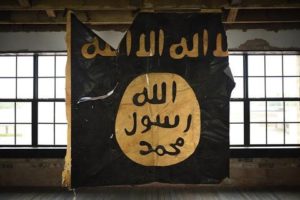 All of this with the intent of raising money to continue our mission – to keep commitments made via political agreements that were implemented by rough men with character and integrity. Men that looked at its partnering force dictated to them by the powers to be as more than a task, but rather as men fighting for their future. Humans who were struggling desperately to grasp life without chaos, even if only for a fleeting moment.

Political policy changes with the wind. Bonds forged in the fires of combat – they tend to be a bit more steadfast.

This auction moves us forward into the next phase. Handing over the “Raise the Black” brand to our ISOF brothers.

This isn’t about making a buck off our “status.” It has never been about us. It is about those that we told we had their backs. Now, with a substantial following, a proven operating strategy, and a soon to open storefront in the Baghdad Mall, we will hand over the reins to our brothers. A brand dedicated to them, for them, raising money to help their own.

You see, people assume due to the current veteran climate that when we started RTB that it was to break into the market and make some loot. People heard our messages in the many podcasts but most never listened, and that’s ok. We understand. We always have. We made it our mission to show you all that we are different. That this is about our bond with men still fighting for a life we take for granted on a daily basis.

Now you can see how everything has come full circle. You can see how we can use the pain that has plagued us for years to fuel our passions.

Why am I alive and not them?

What was the point?

To give me the experience needed to change the world.

Why don’t they listen?

Who cares? They’re listening now, especially when we are requested, by name, by foreign governments.

You know what? Fuck them and their fucking bullshit politics!

This one – this one doesn’t change. Fuck ’em.

We have a plan to change the game. Raise the Black is just the beginning. We are actively working to do the same in Afghanistan, Syria, Yemen, and multiple locations in Africa.

For us, the music hasn’t stopped.

Nah, instead; we pulled the plug on the bullshit, danced to our tune while downloading that Spotify, and then upgraded to premium.

Now we got music for days.