HomeCultureMilitaryPurpose & Connection: What Leaders Must Know About Suicide Prevention 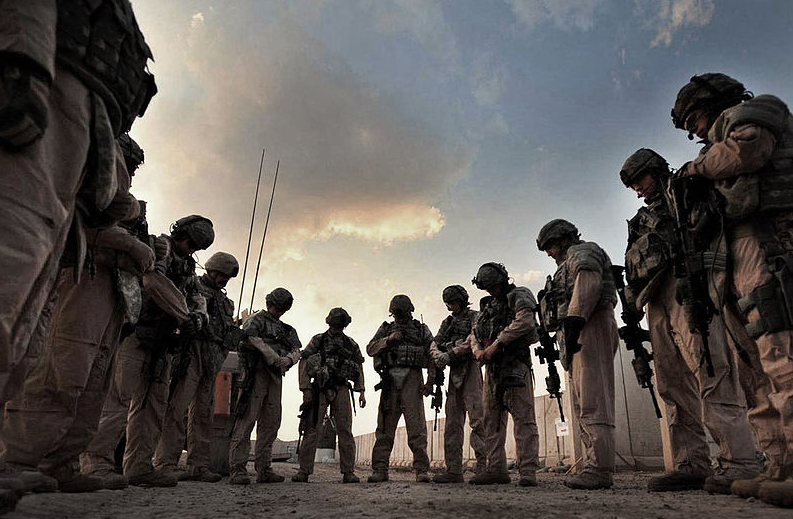 This first appeared in George Carty’s blog on January 10th. It is republished here with the author’s permission.

“Today’s veterans often come home to find that although they’re willing to die for their country, they’re not sure how to live for it.” -Sebastian Junger. Photo taken in March 2020 while entering Iraqi airspace.

At this point, I would assume most people have heard about “22 veterans a day.” The veteran suicide problem has come into the public eye over the last few years, and it is widely studied. I appreciate that, and I am a huge fan of Sebastian Junger’s work as it relates to veterans’ mental health problems. An underrepresented demographic, however, is how many active-duty members are committing suicide each year.

I got out of the Air Force about four months ago, and there has been at least one suicide every month in the Security Forces community alone since then. Less than 100 servicemen have died from COVID-19, but around 600 died just in 2020 by suicide1.

According to Sebastian Junger, veterans and active-duty members were much more likely to die by their own hands than in combat operations during the Global War on Terror. Junger has given several speeches and written about this topic since his time embedded with the US Army in the Korengal Valley, Afghanistan.

Every single unit I served with had at least one person commit suicide during the Global War on Terrorism — sometimes before I arrived, sometimes during my time there. Although the military promotes mental health resources for military members and veterans, people are taking their own lives on a daily basis.

Junger suggests that it isn’t actually trauma from war that is contributing to the majority of suicides, but an alienating environment (modern society) that veterans and military members are unprepared for. Having tasted a tribal, close-knit, team environment, veterans are ill-prepared to succeed in a society that makes us feel “not necessary.”

In short, I say the suicide problem among the US military and veteran population boils down to a lack of purpose and connection. That might sound oversimplified and obvious, but it is in line with Junger’s findings. In Tribe2, Junger introduces the “self-determination theory,” which is that humans need three things to be content:

1.) they need to feel competent in what they do;

2.) they need to feel authentic in their lives; and

3.) they need to feel connected to others.

The only difference is that I believe points 1 and 2 can be attributed to purpose.

Finding, maintaining, and pursuing a purpose may be a deeply personal endeavor. In the military, often times a purpose is issued to you. Be in a specific place, at a specific time, in these particular clothes, to perform a given role. But the military can’t hold our hands forever — eventually we have to take our path into our own hands. If you don’t learn how to change your purpose, your lack of purpose will change you.

Now comes the question of connection.

Maybe, but I’m in no position to point fingers at the civilian world quite yet. In fact, I would flip this exact quote back onto military leadership. Why is it that we statistically are more effective at our duties, and generally speaking, more fulfilled while deployed? Why are we unable to encourage the culture of brotherhood stateside in the same way that we do while overseas?

I have had friends that were the textbook definition of “at-risk” of hurting themselves. Marital problems, alcohol abuse, deployment complications, sometimes all at once. The things I know kept them from self-harm are that they knew what they wanted out of life and they had very tight relationships with guys who were there to listen and to let them vent, make fun of them, have a drink, etc.

I suspect no one in any branch of the military has a good answer to this, and neither do I, but the responsibility lies first with those of us towards the bottom tier. Check in on your bros. This is more than your flight chief or platoon sergeant telling you that your unit is a “family;” we know that in most cases that is horse shit.

From an Air Force Facebook group. “SF” in this context is Security Forces.

What about veterans? What do we miss, and why do we miss it?

“About 40 percent of veterans were not really traumatized overseas, but have come home to realize that they are dangerously alienated and depressed.”

I don’t ever mean to claim that I was in the field shooting at an enemy at any point. I was always an arms-length away from the dirty action, and I am grateful for that. When I’m talking about “war,” what I really mean is being in a deployed location while conducting or supporting operations against America’s enemies. Combat is part of war — one that I don’t have firsthand experience in. My point is, however, that there are other aspects of war that veterans miss (and I would argue that combat is probably not one of them in most cases).

There are few roles in modern society that are arguably as “necessary” as a that of a deployed service member during wartime. Veterans miss their clear, identifiable role and their perceived identity as someone filling that role in their nation’s success. Along with their purpose, they miss their connection to their brothers and sisters that struggle alongside them in pursuit of a common objective. No one bonds closer and faster than a small team in close quarters.

A tremendous amount of Junger’s work revolves around the question, “why do veterans miss war?” My answer is that I had a massive sense of contribution during many of the missions I took part in when I was deployed. I trusted my teammates with my life and they trusted me with theirs. The purpose was clearly defined, and it appeared that progress was being made toward a strategic goal. I still talk to my teammates from my second deployment almost every single day.

“Humans don’t mind hardship, in fact they thrive on it; what they mind is not feeling necessary. Modern society has perfected the art of making people not feel necessary.”

I think sometimes people forget that the military is its own version of a little society. It tries, sometimes too hard, to reflect the larger American civilian society. There are units within the military that experience closer relationships, tougher situations, and more mission-essential work than others, but as a whole community, it obviously needs work to become a more “tribal” environment. To reiterate, here are the specific qualities to encourage among your organizations:

1.) they need to feel competent in what they do;

2.) they need to feel authentic in their lives; and

3.) they need to feel connected to others.

Suicide is a complicated issue, and I don’t think there will ever be a one-size-fits-all solution to it. However, I think it starts with veterans and military members (especially leaders) encouraging an environment that is more “tribal”, and maybe less similar to modern society.

“I’ve been there too — alone in a crowded room, and they’re all laughing at you,

A room full of rolling eyes and self-doubt, narrow minds and big mouths…

You’re not in this alone, and you don’t have to feel that you are.” – Stick To Your Guns