By now most of the veteran community is aware of the murder case of Navy SEAL Eddie Gallagher, who was on trial for allegedly killing a captured and wounded ISIS terrorist in Iraq. Charged with a litany of offenses including murder, obstruction of justice, and retaliation against witnesses, Gallagher was ultimately acquitted of the most serious charges and was released with “time served” for his one conviction. This case garnered national headlines and received personal involvement of President Trump, who directed the Navy to release Gallagher from pre-trial solitary confinement and made it very clear what side he was on in this case.

Gallagher was ultimately found guilty of the minor charge of posing with a corpse, but was acquitted of the substantive charges he faced. Despite the one conviction, this case was a loss for the prosecution, which had much evidence and multiple witnesses to back up their case but could not bring it home.

The latest twist in this case is that much if not all of the prosecution team (who lost a case supported with a mountain of evidence and marred by prosecutorial misconduct) received accolades from the Navy for their work on the case. A total of ten medals (Navy Achievement Medals, or NAMs) and commendations were handed out in a public ceremony earlier this week. The awards raised eyebrows, as the case was considered a failure by the general public—some rightly likened it to a “dumpster fire”—and in light of the multiple allegations of misconduct by the prosecution team.  Specifically, the original lead prosecutor in the Gallagher case was removed by the presiding judge after bugging emails sent to defense lawyers, and the Navy was forced to release Gallagher from highly-controversial pre-trial solitary confinement after the involvement of President Trump.  Given the situation, it’s hard to see how this shower of awards wasn’t a direct “f-u” to the President and the Gallagher defense team.

But it’s often hard to judge intent over the Internet, so we’ll set aside the “why” for now and concentrate on the “what.” In this situation, wherein the Navy handed out seven medals and three commendations, for a case that was a clear “L” and that was a prosecutorial goat rope from start to finish, seemed a little extreme to the average non-legal lay person. Ten awards? How many people were involved in this prosecution? Was this an “everyone gets a trophy” consolation prize? “Hey, you didn’t convict the murdery SEAL that we think went around whacking people at will in Iraq, but…” 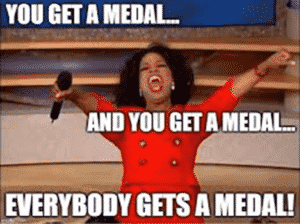 So, participation awards for everyone on the Prosecution team. But wait—there’s more! Almost immediately after the news broke that the Navy handed out the awards, President Trump directed the Navy to rescind them, as he announced, as he does, via Presidential tweet: 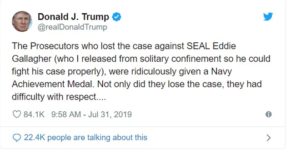 There are two very interesting things about this case. The first is that the Navy saw fit to award the prosecutors in a failed case that was heavily marred by prosecutorial misconduct. The second is that the President of the United States decided to get involved and get the medals rescinded. Yikes! I mean, how bad do you have to have dorked your job up, to the point that the President himself yanks back the award you got for doing it?

I’ve been in the military a long time and I can’t recall a case where a sitting President, executing his power as Commander in Chief, directed the claw back of a contemporary military award after it had been issued. I’ve heard of attempts to rescind major awards that were given in the distant past, such as the Medals of Honor awarded at the Battle of Wounded Knee, but a quick Google search didn’t turn up anything substantive in the contemporary era. And what little I did find, it certainly didn’t involve low-level awards like a NAM.  And when I say “low level,” I meant exactly that.  The NAM is literally the lowest-level achievement medal that the Navy can bestow. It’s the kind of thing you give to a Sailor for consistently having the highest physical fitness score in the unit, or to a young officer for going a great job running a range or planning the unit’s ball. It’s a very minor award. But even that, apparently, was too much for President Trump.

I think the President was right to revoke those awards, and here’s why:

1) The Prosecution Didn’t “Achieve” Anything
The first and foremost reason for pulling those medals from the prosecution team is, of course, that they lost. The NAM is the Navy “Achievement” Medal, not the Navy “Hey, at least you tried” Medal. Gallagher was charged with seven crimes and got convicted of one. Getting one conviction out of seven major charges is 14%. A .14 average isn’t even good in baseball; it’s terrible for felony trials. I’m sure everyone worked hard, but the military is a results-based organization. Giving awards for effort and not accomplishment has no place outside of combat. Add that writeup to their Permanent Change of Station (PCS) award when they move on. 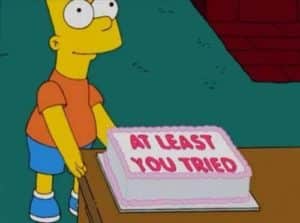 2) Their Own Witness Torpedoed The Case
One of the most dramatic moments of the Gallagher case came when one of the prosecution’s star witnesses, to whom the prosecution granted immunity, testified that it was him, not Gallagher, who murdered the ISIS terrorist that Gallahger was on trial for killing. Talk about “wtf” moments. Isn’t knowing what your own witnesses are going to say on the witness stand before they testify in your own case like… rule #1 of being a lawyer? I don’t know since I’m not one. But it’s lot to be at least Top 10. 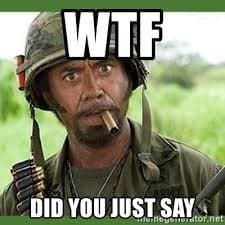 3) Straight Up Prosecutorial Misconduct
You can’t win every case, and I get that. I think that the Navy was right to put Gallagher on trial; there was a lot of evidence to support the charges and something this serious, you can’t just cover up. And prosecutors can’t control what their witnesses are going to say on the stand; people are people and they’re going to do what they are going to do. But keeping Gallagher in solitary confinement and then bugging emails the prosecution sent to the defense attorneys to find out if someone is leaking them is wrong. Two wrongs and a big “L” on the scoreboard don’t make a right. And they certainly don’t warrant the issuance of ten awards and commendations to reward failure.

So that’s the “what” of the situation, and three reasons why I think President Trump was right to pull those awards back. Before I wrap it up, I think it is important to note that at least some of the individuals who received the awards and commendations were not originally part of the prosecutorial staff, so they are not tainted by personal misconduct committed by others. But this was a team effort, and if the prosecution team engaged in misconduct—and still lost—then there is no cause for accolades whatsoever. In fact, what is probably more deserved in this case is an investigation into the investigators, something that appears to be happening now. It makes one wonder what the Navy will ultimately be handing out to the Gallagher prosecution team, NAMs or LORs.

Scott Faith is a veteran of a  half-dozen combat deployments and has served in several different Special Operations units over the course of his Army career. Scott’s writing focuses largely on veterans’ issues, but he is also a big proponent of Constitutional rights and has a deep interest in politics. He often allows other veterans who request anonymity to publish their work under his byline.  Scott welcomes story ideas and feedback on his articles, and can be reached at havokjournal@havokmedia.com.