HomeCultureMilitaryPlaying Hopscotch in a Minefield Along the Iran-Iraq Border 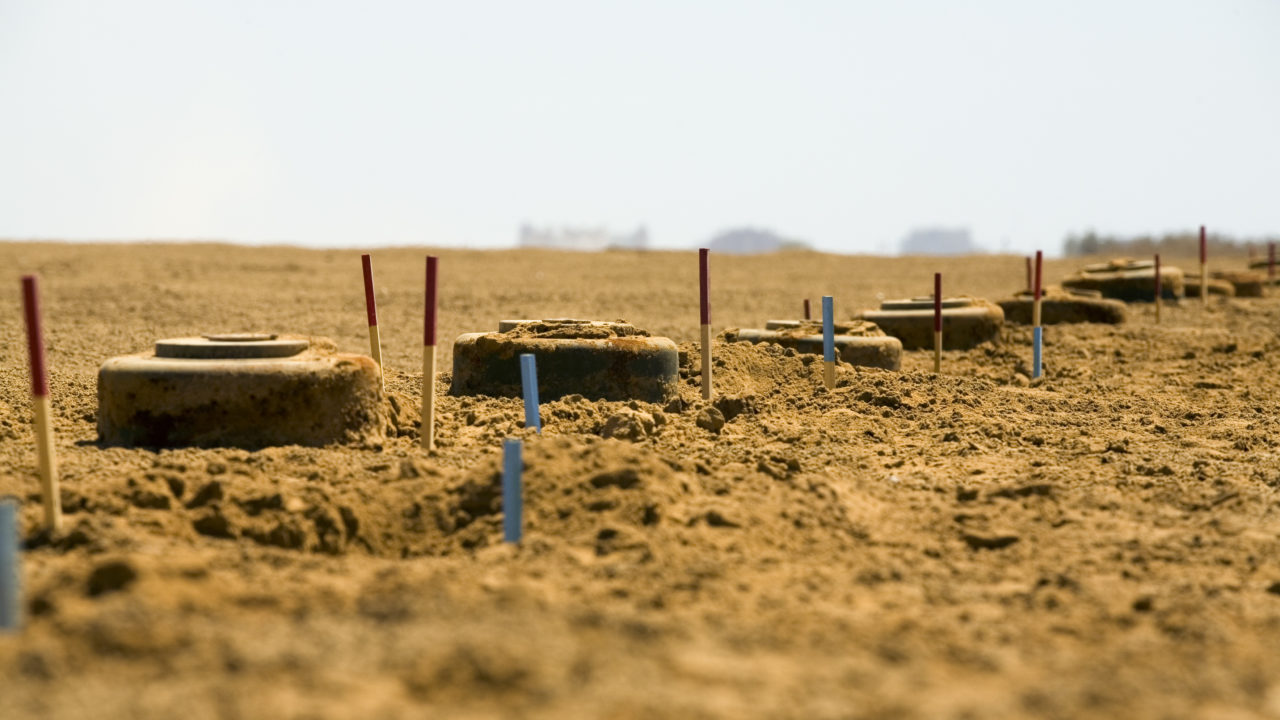 This originally appeared in vocal media as “Mines Abound” and is republished here with the author’s permission. Justin Haywood is a former UK soldier who served in 3 Bn PWRR.

I’m the dude with the long antenna sticking up from my set of body armour in the pictures.

I found that the antenna would give perfect reception at full length, but also made me an instant target if we were engaged by insurgents or smugglers (not likely but always a possibility). The Patrol Commander (‘The Boss,” aka a Lieutenant, Leftenant to us) and I joked about the normality of officers and radio operators being shot first in an ambush situation; which was why I was normally second in line and the Boss was further back in the order of march when we patrolled and were strung out in a staggered formation.

The formation allows for separation between troops if an Improvised Explosive Device or just a standard anti-tank or personnel mine is detonated, ensuring there are still members of the patrol to fight through if necessary and to Cas-Evac the wounded. The reasons why Tactics, Techniquies, and Procedures or TTPs exist was demonstrated when Steveo and I, at the front of our Patrol, were made aware that there were Anti-Personnel mines near our feet.

We stopped, reviewed what was happening and went through the options.

The rest of the patrol was outside any blast areas and were able to check the EOD team response times and all that good stuff. Steveo and I just stood there looking around us and checking for any other items of nastiness, and I remember us being calm, collected, and just going through the mine awareness drills we had been taught.

I had my mine detector kit on me in my Chest Rig, not that I used it; It was a kit that I’d put together myself with some wire and coloured tape and I think it may have had some weapons cleaning rods as probes but I can’t remember now. I kept it all in an issue black sock within a plastic freezer bag in my Blackhawk Chest Rig and it never moved for the whole tour save to empty sand and dust out occasionally.

After a while of talking through the options (and by this I mean that Larry as the patrol commander and Woz as 2nd in Command made us aware of the score, what the response time would be etc.) and in the knowledge that the EOD team was about 4 hrs away we very carefully retraced our steps and re-joined the Patrol.

I don’t think Steveo and I were even scared. We’d spent days around the minefields by this point and every step off any asphalt road was dodgy so you just accepted it may happen and got on with your job.

Remnants of vehicles, mines, shells and just hundreds of thousands of Unexploded Ordnance littered it all. We had to navigate at night once; an error in someone else’s LOCSTAT (everyone swears blind that it wasn’t their fault even now) had led to us crossing an area where we were literally tripping over old mortar bombs, artillery shells and playing “hopscotch” with legacy munitions from the Soviet era.

Only one in two patrol members at this time had a Helmet Mounted Night Vision Monocular; I had a Thermal Weapons Sight and Mike had also issued me a KITE sight, a huge unwieldy Night Vision Scope that I could attach to my rifle. It lived in my Daysack and saw occasional use when in static force protection roles but it was just too heavy and unwieldy for patrol use, whereas the Viper Thermal Sight was brilliant; it made the desert night into something out of a video game, all whites, and blacks, but very sharp definition at closer ranges.

Tiny Piezoelectric Anti-Personnel mines, designed to blow a hole through your foot and then lure in others to your aid; these were dispersed by Helicopter or by Artillery Shells filled with them during the Iran-Iraq war.

Jumping-Jacks or Bouncing-Betties, with a propellant unit ready to propel a charge up to waist level, where it separates from a wire or cord which initiates the explosive. “Normal” little Russian Anti-Personnel mines, like little pudding bowls or things you might see in the plumbing aisle, were intended to take a lower limb off, normally a foot, possibly killing the immediate casualty but also luring in other victims.

This was our workplace and one that everyone had volunteered for one way or another.

I’d like to point out the outstanding leadership of every Non-Commissioned Officer and Commissioned Officer on that patrol (and overall in 2 Platoon). The patrol lasted over a week, winding its way through the trailing history of Iraq’s border zones. 2 Platoon was exceptionally lucky in all the NCOs, whether reserve or regular army, plus the Boss led from the front. They taught us the toolsets of our trade every day and constantly held themselves to the standard they expected of us. Not one would tell me to do something that they wouldn’t do themselves, a different attitude found elsewhere.

Larry, Mike, Daz, Richie, Woz, Jerry, Stu, Stevie, Lee, and the rest of the gang, I not only miss you like mad, but I hope that through your own lessons learned that were passed on to us I can continue to make our legacy a proud one.

(The Regimental strapline is “Fierce Pride”)

The Regiment’s nickname is ‘ The Tigers.’ This is inherited from the Royal Hampshire Regiment, which as the 67th (South Hampshire) Regiment was awarded the figure of the royal tiger superscribed ‘India’ in 1826, following its return after twenty-one years’ service in India. The Regimental motto, inherited from The Queen’s Regiment, is “Unconquered I Serve.”