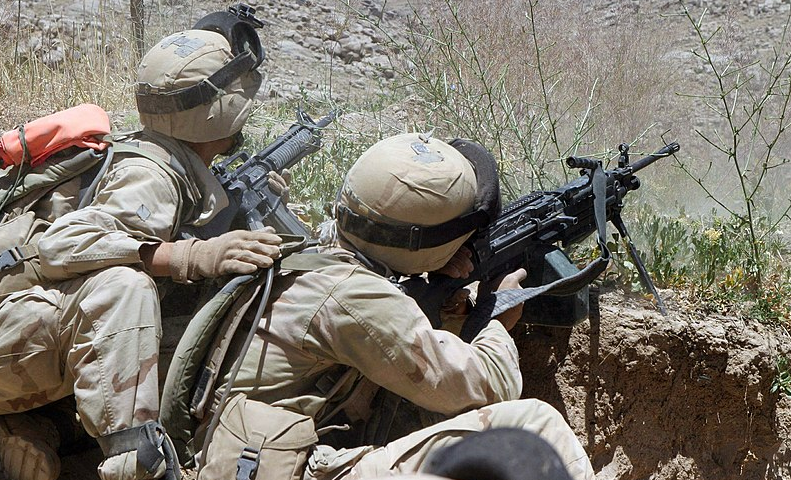 Last night, while reviewing the contents of a box of military memorabilia, I discovered a news article that my Mother mailed to me while deployed to Afghanistan no longer exists. It was gone. I couldn’t find the article archived anywhere online and I’m perplexed by its disappearance.

The missing article explained the first and only casualty that I am aware of, that the 22nd Marine Expeditionary Unit (22nd MEU) experienced during its 2004 involvement in OPERATION MOUNTAIN STORM.

I remember when the news of Cpl. Payne’s death hit the COC the next day after his passing. At first, the atmosphere in Charlie Company was one of disbelief, but it quickly morphed into a wave of rage. As we waited in tense silence for the CO to give us our orders, I could feel the adrenaline coursing through my veins and knew the Marines had to be drowning in that rush of sensation, too.

The grief would come later.

Our mission eventually came down the pipeline. Molle packs were hurriedly gathered and sent ahead of us to FOB Indian Head, later renamed FOB Payne. Meanwhile, the Female Searchers and the rest of Charlie Company loaded only what we could carry onto our bodies before being flown out.

The CH-53 helicopter dropped us off close to a compound where the ambush of the patrol and Cpl. Payne’s death occurred. We searched the village for “persons of interest,” weapons, and information.

It was a frustrating and futile endeavor. The locals were more afraid of the Taliban, Al Qaeda, and the Anti-Coalition Militia forces than us. They knew the Americans wouldn’t kill them without provocation.

Days later, on May 11th, I and a handful of other Female Searchers attached to BLT 1/6 attended the field memorial service held in honor of Cpl. Payne at the FOB. The females hung back and off to the side, comforting each other on the outskirts of the circled Marines in mourning.

We may not have known Cpl. Payne personally, but we all wanted to pay our respects to a brave and young Marine who lost his life too soon.

The pain in the air was palpable.

I cannot recall what the Chaplain said during the service. I just remember the tears: mine and everyone else’s. I cried so hard!

My heart hurt for all the Grunts, but especially for Cpl. Payne’s Mom.

According to one of the guys, Cpl. Payne’s Mother received notification of her son’s passing on Mother’s Day, stateside. I have no idea if that is true or not. But as a mother myself now, I cannot fathom the agony Cpl. Payne’s Mother endured that day.

Speaking of which, Mother’s Day is fast approaching again, which momentarily freaked me out!

I am relieved to say that I eventually found my lost article and, after a quick Google search, even discovered other articles about Cpl. Payne’s sacrifice for his country on the internet.

The thought of Cpl. Payne’s memory disappearing wrecked me because it was one of my greatest fears while deployed to Afghanistan.

Before my deployment, I hadn’t done anything worthwhile or noteworthy with my life.

I felt ashamed at the meaninglessness of my existence up and until that point. However, facing the threat of death was humbling, and it has motivated me to live with purpose every day since.

Anyway, I am glad Cpl. Payne will live on in the memories of his friends, loved ones, and on the web.

Maybe one day someone else from the MEU will pull out their stash of war paraphernalia, safely tucked away in the back of their closet, and remember me too.

Being worthy of remembrance is a lovely hope to hold onto.

Below is the article from 2004. The last paragraph reads: “Meanwhile memorial services are being held in American bases in memory of Corporal Payne, who survived deployment to Iraq only to become America’s latest loss in this quieter war.”