The Future of Warfare: Meet the New Boss, Same As the Old Boss
by Matthew Krause

Killer robots, artificial intelligence, smart goggles with heads up displays, hypersonic weapons, ultrasonic weapons, autonomous weapons. These are some of the trending topics of conversation among members of the military, defense industry, Academia, and policy-makers. Technological innovation is advancing at such a blistering pace that even the word “cyber” is now “so last year.” The U.S. is ramping up its hypersonic and autonomous vehicle research while China is experimenting with biotechnology and genetic engineering. Deep fake technology makes everyone vulnerable to blackmail or embarrassment, and the U.S. Navy now has sharks with lasers.

Maybe the Navy doesn’t have sharks with lasers. But all the other stuff I mentioned is real. Modernization is quickly becoming pejorative because it implies a process of catching up, which also implies the converse: that we’re behind. Trying to stay ahead tactically, operationally, and strategically, is now the new urgency. The United States’ strategy is focused on near-peer conflicts and revisionist states, and preparing for the big battle, which may or may not come. To avoid some confusion, when I reference near-peers or competitors: I mean Russia and China. When I reference non-competitors, I mean those states that don’t have the technological capability of the United States, for example Iran or North Korea. Revisionists states are those that seek to alter the world’s balance of power.

With this tremendous effort of labor and expenditure of capital, there is a danger of forgetting that future conflicts will likely look very similar to previous conflicts: there will be exploding ordnance inside cities. There is a danger of relying too much on technology, or focusing on the lethal capabilities of technology without recognizing the impacts on civilians in urban areas. 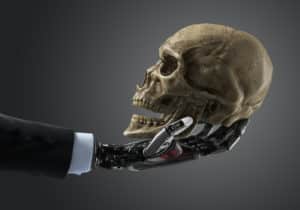 With the advancement of great technology comes vulnerability to technology. All of the systems described above are vulnerable to cyber-attack from both near-peers non-competitors alike. With technology, it isn’t a matter of if it will break, but when. Just listen to a car salesman trying to sell you an extended warranty. The drive train on your new car will probably last a long time, but your car’s electronics won’t.

Future conflicts will be one of two types: Type 1: peers will fight other peers and both parties will use kinetic and non-kinetic effects against each other’s technology in order to gain tactical overmatch. Type 2: non-competitors will fight other non-competitors primarily using last generation technology. Near-peers may also participate through its non-competitor partner using a limited amount of advanced technology. This second scenario will likely be the most common type of conflict in which U.S. forces become involved in the future.

So why spend all this time and effort on technology? It’s simple, we have to for at least three reasons: 1) The U.S. military not only must be ready to win a large-scale multi-domain campaign with a near-peer, but also with capable non-competitors. 2) Technology can be used to assist proxy forces in limited degrees. 3) New technology has the potential to reduce civilian casualties on the battlefield.

Nevertheless, the military should still train and prepare for the analogue fight because it could find itself in new domains, like cyber, that are contested. Also, any member of the Department of Defense can attest that even on a good day, network access and speed is less than optimal.

Many of the U.S.’ partners may be using less advanced systems with varying degrees of effectiveness. Assisting our partners with their own effectiveness is a national priority according to former Chief of Staff of the Army, General Mark Milley. This priority, borne from decades of fighting alongside Iraqi and Afghan forces, served as the impetus for the creation of Security Force Assistance Brigades (SFABs) in the Army. SFABs and Special Forces Groups will still need to be able to operate in an analogue environment in order to achieve effective inter-operability with their less sophisticated partners.

Interoperability aside, the international community should also be mindful that most future conflicts will continue to feature the use of explosive ordnance in urban areas, but precision and non-precision. Advancement in precision weapons along with U.S. policy has resulted in an impressive reduction in civilian casualties in both the Iraq and Afghanistan wars to the extent that there is a significant amount of public outcry when a civilian dies in either theater. In the future, this might not be the norm.

First, there just aren’t enough precision weapons to support a sustained high intensity conflict with Russia or China. Even against a non-competitor, like the so-called Islamic State, the United States at times found itself running low on precision weapons. Furthermore, despite much more robust stocks of precision weapons, aerial delivery capacity and precision surface-to-surface capability is not unlimited. This would likely cause the United States and its allies and partners to use large quantities of non-precision munitions out of necessity.

Kinetic capability is not the only potentially limiting factor. Targeting decisions are based on intelligence: finding the precise location of the enemy, its size and nature, at the right time. This requires intelligence assets. Similar to munitions stocks and delivery platforms, intelligence collection assets are also not unlimited. This is important because even if a party to a conflict employs a precision weapon, without accurate intelligence, the precision weapon will precisely hit the wrong target.

Gone are the days where large formations of tanks and troops will be able to line up and slug it out in the forests and plains of Europe or the deserts of Iraq. Much of future fighting will take place in urban areas and megacities because the world’s population is growing. Population growth tends to be higher in those countries that are less stable. In those countries, populations tend to migrate into cities due to the employment opportunities cities can provide. In tightly-packed urban areas, even the most sophisticated of weapons employed by the most careful military would have a hard time avoiding effects against civilians.

What can states do? There will always be conflicts among non-competitors that feature little to no involvement with world powers, or world power participation that only seeks to manage a conflict by limiting it to a particular geographic space in pursuance of foreign policy goals, for example, Libya, Syria, and Yemen. One obvious example is the continued perfection of low-collateral damage precision strike weapons. As stated above, however, even the most sophisticated piece of exploding ordnance may result in civilian casualties in population-dense operating environments. So, how can states keep up technologically while still making good targeting decisions? I offer some mitigating concepts in order to spark discussion.

To my last point, international criminal law is exceedingly complex and the topic of accountability has been analyzed ad nausem by policy-makers and Academics. It’s time to re-focus the discussion through a criminal justice lens and solve the problem with action-oriented law enforcement professionals and prosecutors. The international community sends the wrong message when thousands of members of the Islamic State and members of the Bashar al-Assad regime in Syria are going unpunished for some of the world’s most horrific war crimes and gross violations of human rights. Economic coercion and public shaming are not enough for those who are shameless.

Accordingly, States should place greater emphasis on meaningful enforcement of laws that are already in place. For example, use criminal intelligence to track suspected war criminals into States that could have domestic criminal jurisdiction. Second, develop mechanisms to conduct evidence-quality investigations in non-permissive environments. Admittedly, this requires great difficulty and immense risk, but the international community needs to be prepared to take this risk because the current investigative capability does not work effectively. Finally, some States may need to expand their universal jurisdiction statutes to create more prosecutorial opportunities domestically. Nevertheless, the laws are already there, it’s time to create a culture of aggressive enforcement.

By all means, continue to advance the technology of weapon systems. In fact, the international community needs to accept that militaries will continue to use innovative technology more and more, including autonomous systems: it isn’t a matter of “if.” Accordingly, the conversation should be re-focused to the “how.” Governments and the international community should realize that future conflict will likely have much of the same characteristics as previous conflicts.

Characteristics of future conflicts will likely include: fighting in megacities, analogue systems and unsophisticated weapons, larger numbers of civilian casualties, and potentially de-stabilizing population migration. In order to mitigate the increasing risk to civilians in urban areas, researchers and industry should prioritize not just those systems that seek to create tactical overmatch and effective defense. Industry should also me mindful of the opportunity to leverage great gains in technology to develop systems that could reduce civilian harm.

Otherwise, future war will continue to look much like previous war…only worse.

Matthew Krause is an officer in the United States Army Judge Advocate General’s Corps and has had a career spanning over twenty years including deployments to dusty, smelly places. He is an attorney specializing in international law and human rights, and holds degrees from Eastern Michigan University, Wake Forest University School of Law, and Georgetown University Law Center. He loves music, dogs, and whiskey, but hates D.C. traffic, video games that don’t have cheat codes, and mean people. He writes about national security law, culture, things that explode, and a little satire. The views expressed in his work are his own and do not reflect the policy of the U.S. Army or the U.S. Government, especially the satire.