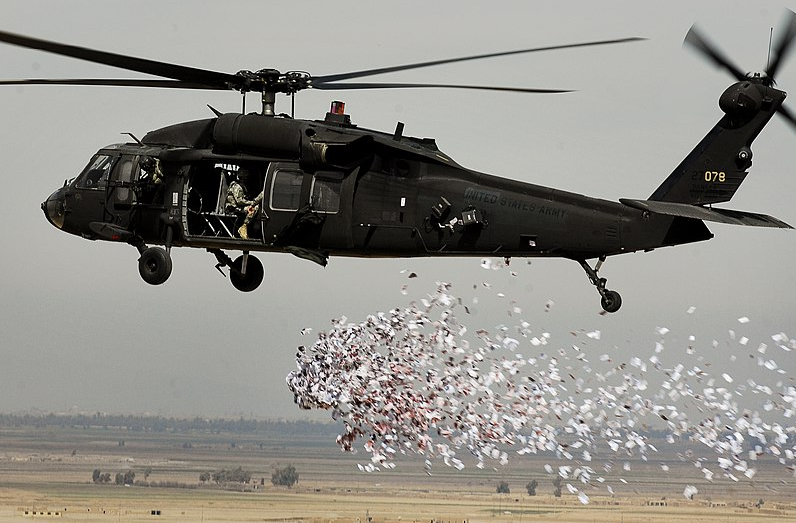 Every organization has an internal hierarchy. Whether it be the U.S. Army, Hewlett Packard, or the Federal government they all have a multi-tiered chain of command through which all concepts, products, ideas, memos, projects, and so on need to be routed through.

Battalion Commanders, C.E.O.s, Chiefs Of Police, Presidents, and so on are generally at the end of the approval process. They have specific ideas about what they want from subordinates regarding work products. They often want to leave their brand on it and make it their own.

In my current job, we call this, “pissing on it.” As in, “I’ll forward this to the boss. He’ll probably want to piss on it so I’ll send it back to you so you can make revisions based on his suggestions.”

In 2003 I was a Psychological Operations Officer assigned to 5th Special Forces Group in Iraq. Psyop is generally responsible for being the “Commander’s Voice” in the field. It’s like the advertising arm of a company, its purpose is to reach out to target audiences. This is done through a variety of mediums. At the local, tactical level this generally means driving around in HUMMVs with loudspeakers on the roofs broadcasting messages like, “No Celebratory Gun Fire” (which usually drew fire from the natives). It also meant handbills passed out by Psyop soldiers and leaflets dropped from aircraft.

The approval process loudspeaker messages, handbills, and leaflets were routed through was very extensive. To use a new leaflet that wasn’t based on a prior design required approval through the CENTCOM Commander, as in 4-star General Tommy Franks. It always struck me as odd that you can drop artillery or call for CAS with Battalion or Brigade approval but to throw a piece of paper out of a helicopter required approval from the top dog in theater.

This process was far from streamlined since any product had to go through the hands of many Majors, Lieutenant Colonels, Full Bird Colonels, 1 Star Generals, 2 Star Generals, 3 Star Generals, and so on. This is further complicated by the fact that none of them are co-located. Imagine a new leaflet going from Iraq, then Kuwait, Qatar, Ft Bragg, Tampa, back to Bragg, Kuwait again, then returning to Iraq (assuming that it doesn’t get disapproved). This could take weeks…

I had an experienced NCO working for me, SSG Bumgardner. He was a typical Psyop NCO, extremely intelligent who was completely at ease briefing a group of staff officers or playing Spades with a group of privates and specialists. He’d been in Psyop for a while and was familiar with the ins and outs of the approval process.

While in Iraq he presented me with a leaflet to be put forth for approval. As I reviewed it I realized that there were numerous errors on it. I pointed this out to SSG Bumgardner.

He responded blandly, “I know…”

After a short pause while I tried to process his response I told him that we needed to fix them before we sent it up the chain of command. He said, “That’s not how we do it. It’s better we send it up as is.” I reinforced my initial message saying that we weren’t going to send a deficient product on. Bumgardner gave me “the look” that NCOs had given officers since Revolutionary War. He then explained the logic behind sending it forward.

“You see sir, we send the product up with a couple of obvious errors. The Colonel reviews it, points out the errors, we fix them and it gets approved. That way the Colonel feels like he did his job and improved it. Its called the 90% solution.”

I was dumbfounded… to try to wrap my head around it. I basically repeated back what he had said, “So, you’re saying, we’re going to intentionally send up a messed up product so some field grade can get his ego fix and feel like he did his job?”

“That’s right. It’s the fastest way to get stuff approved.” He said like it was the most obvious thing in the world.

Reluctantly I agreed to do this. As predicted, the Colonel found the obvious errors, and sent it back to us for revision. We made the changes, it was immediately approved and disseminated throughout Iraq.  From then on I accepted the fact that this was the preferred process for getting things done. It was stupid and ass backwards but it worked. It’s hard to argue with success…

On another occasion, we had to present a leaflet to a Special Forces Colonel from Arkansas. Nothing against people from that part of the country but he had a slow, thick Razorback drawl that kind of puts his response in context. It was our practice to print the leaflet in English during the review process and, once approved, translate them into the local language. The Colonel looked at the leaflet and said, “You all are going to translate this into Iraqi before we send it out, right?” The Major who was with me responded appropriately. He made a note in his notebook and said, “We’ll take care of it, sir.”

This was a better response than, say, “What do you think you stupid hillbilly!” In a strange way, Colonel Obvious had outsmarted us. He provided us with his own, built-in 90% solution so we didn’t have to. It’s debatable whether or not he intended to do this. So, regardless of what line of work you are in, when it comes to presenting work products to your boss remember: Stroke their egos and make them feel smart and relevant. Then get back to doing your job.

This article first appeared in The Havok Journal August 29, 2018.

Nick is a Police Officer with the Redwood City Police Department in Northern California.  He has spent much of his career as a gang and narcotics investigator.  He is a member of a Multi-Jurisdictional SWAT Team since 2001 and is currently a Team Leader.  He previously served as a paratrooper in the US Army and is a veteran of Operation Iraqi Freedom.  He has a Master’s Degree from the University Of San Francisco.