HomeCultureMilitary“Not Quite One Weekend a Month”: Disaster Relief with the National Guard 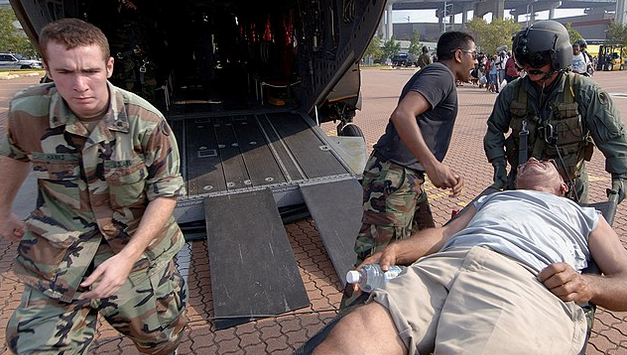 In the summer of 1992, I was a college student on the “four and a half year” plan at a college in North Florida. I was in Army ROTC, waiting to get commissioned as a Second Lieutenant. At the time, ROTC cadets could serve part-time in National Guard units as part of the Simultaneous Membership Program. I was a member of a light infantry unit, A Company, 2nd Battalion, 124th Infantry Regiment. In theory, with the SMP program, ROTC cadets were supposed to be put in leadership positions within the National Guard units, serving as Platoon Leaders. In my case, there were plenty of good officers in A Co so they didn’t need any PLs.  So I was assigned to a rifle squad where I received OJT on how to be a rifleman.

This turned out to be a great experience for me. I learned first hand the struggles and difficulties enlisted soldiers go through and how much of an effect leadership, whether it be good or bad, has on them. I also learned some enlisted “tricks of the trade” like how to sleep under a HUMMV when assigned to do motor stables or how to pack your ruck so it looked like it was full so you wouldn’t have to hump additional equipment like spare radio batteries and machine gun ammo. All this came in handy when I went on to eventually became an active duty platoon leader and I think it made me a more effective one overall.

As an SMP cadet, we got to do all the things the rest of the unit did. We spent a lot of time in the field on weekend drills and during our two weeks of annual training. I did all the usual grunt stuff from being a rifleman, grenadier, ammo bearer, machine gunner, Radio Operator (RTO), and so on.  We trained with all the usual weapon systems as well as a couple of strange ones. During annual training, our supply sergeant located a cache of FLASH munitions launchers. The FLASH was a disposable, four-tube, 66mm rocket system that fired White Phosphorous rounds. We managed to burn down a large portion of Camp Blanding when we fired it on a dry day.

The one thing I never expected was to be deployed on any type of real mission. I was a cadet marking time until I went on active duty. Since I hadn’t been through Basic training or AIT I assumed I was deemed non-deployable. That all changed in August when Hurricane Andrew came to South Florida. Andrew did massive amounts of damage. It was the most devastating Hurricane until Katrina in 2005. It caused 26.5 Billion dollars in damage, resulted in 65 fatalities and 177,000 displaced civilians. South Florida was in a state of anarchy with looters stealing everything that wasn’t nailed down. Local law enforcement was overwhelmed so the National Guard was called. In turn, they called me.

When I got to the armory, I was impressed by not only the level of calm but also the high level of organization. At the time, the unit was a mix of career guard soldiers who had been on numerous riot and disaster response missions and Just Cause/Desert Storm veterans with combat experience. We loaded up the deuce and halves and headed South.

When we arrived in Miami we were greeted by a sea of humanity. Hundreds of soldiers had been called up and we were all stuck in a single gymnasium.  We each staked out a small spot for a cot and our gear and got ready for whatever came our way. We were each issued thirty rounds of 5.56 for our M-16A1s. We were given strict orders to not chamber a round unless we were faced with a situation where we had to defend ourselves. As soon as we left the gymnasium we all chambered a round…

The streets of Miami were in complete chaos. 160 MPH winds had leveled many houses and buildings. Looters were rampant throughout the city, taking advantage of unsecured residences and buildings to steal what didn’t belong to them. We set out trying to regain some sort of control and to begin the process of returning things to normal. Our orders were simple. Get rid of the looters, send them packing when possible, and arrest them if necessary.

My first run-in was with a group of miscreants trying to break into a fast food restaurant. The squad I was in quickly surrounded the business. As I approached an exterior corner a subject quickly came around the corner. He had a black object in his hands, mounted at his shoulder. It initially appeared to be a rifle. I clicked the safety from safe to full auto and prepared to go to fire. The subject turned out to be a CNN cameraman, oblivious to the fact that we were all armed. He almost got popped. 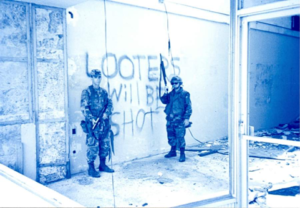 A common message from the residents of Miami to looters.

We had lots of run-ins with burglars. We’d catch them in the act, detain them, and turn them over to the local authorities. I don’t know what Miami PD did with them after they took custody. I never got subpoenaed for any proceedings so I’m assuming they never made it to court. Maybe they drove them out of town or just kicked them to the curb. I wouldn’t blame them if they did. We sent most of the looters packing, making it clear that returning would be hazardous to their health. The crooks liked to target gun stores along with places with cash or high-dollar items.

On another occasion, we were sent to get rid of a group of looters at a convenience store. It turned out to be a mini-riot with dozens of looters trying to pick the store clean. We were greatly outnumbered but were able to convince the group to leave. 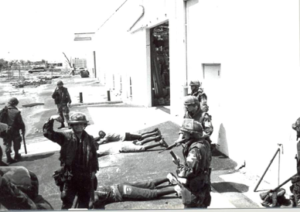 After a couple of weeks, we got involved in some more humanitarian stuff like handing out food, water, and clothes. I was manning a supply point, handing out pallets of bottled water to needy civilians. We had a long line of cars waiting their turn to get some. Out of nowhere, a Cadillac came in at a high rate of speed, cutting off others who had been waiting for hours. I told the driver to go to the end of the line and wait his turn like everyone else. He jumped out and started screaming at me, yelling “What are you gonna do, shoot me?” I said, “no” and proceeded to try to butt stroke him to the head. I missed him by a hair and he retreated to his car and drove away. About an hour later my squad leader told me that the Platoon Leader had received a complaint from an irate “citizen” who had been denied water and threatened with assault. That was the first and last time I was allowed to work a supply point.

As with any deployment, there were some humorous moments as well. My platoon set up in a strip mall one afternoon, providing a presence in one of the ravaged areas and as a forward operating base for missions. Despite the hurricane many of the windows of the businesses were intact. There was a sporting goods store that hadn’t been looted. One of the troops located a set of golf clubs and some balls. They spent the better part of the afternoon smashing windows with golf balls. It provided a great amount of stress relief. On another day, while back at the gymnasium we were given access to the showers in the locker room. As we showered a sewage line ruptured, pumping a few hundred gallons of raw sewage into the shower area. I happened to be showering at the time and found myself standing in about of foot of liquid human waste. A crappy end to a long day. 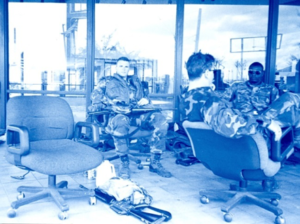 Enjoying a rare moment of downtime while patrolling the city.

The deployment lasted about a month. At its conclusion, we all returned to our regular civilian jobs and school. I went on to serve in the 82nd Airborne and other units and would eventually deploy to Iraq in 2003. The troops I served within the Florida Guard were as squared away as any I ever worked with. And the conditions we encountered in Miami were almost on the same scale in terms of destruction as I would see in Baghdad ten years later. Many of the troops who were vets of Just Cause and Desert Storm said they faced tactical situations similar to what they had seen in combat. While in Miami the sound of gunfire was often heard, a constant reminder of the dangers the mission entailed.

So hats off to the patriots who volunteer to serve their communities at home and their nation abroad. 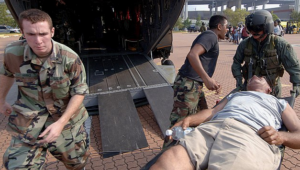