HomeCultureMilitaryAUSA Conferences: Why Some Animals are More Equal Than Others 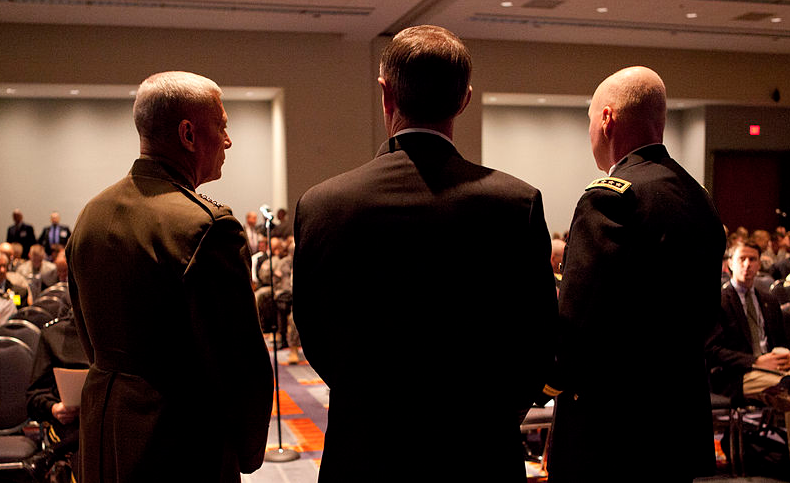 It is that time of year; the annual Association of the United States Army’s (AUSA) capstone weeklong October meeting in Washington D.C. Throughout the year the AUSA hosts and sponsors micro events on key strategic focus points or “hot topics” that impact the future of the United States land component fighting force. Similar to the capstone event, where seemingly endless General Officers and Senior Enlisted Advisors converge on Washington D.C., micro events throughout the year offer senior leaders opportunities to  “engage in professional-level dialogue and in-depth discussions” to inform the broader community and discuss the profession. This is an implied part of the profession at arms and shouldn’t take multiple key decision-makers and leaders away from their duty position to professionally develop.

364 days of the year, Staff Judge Advocate (SJA) legal opinions would deny approval of anything remotely labeled a “conference” in order to use government travel funds. Traditional unit staffs are unofficially made to get creative with verbiage to work around the legalese and expenditure of government funds to host or execute much needed mobile training teams, guest speakers, or critical planning sessions. Staff must resort to naming events symposiums, working groups, lecture series, or professional development in order to gain approval. So, why are senior leaders allowed to turn a blind eye multiple times annually, and expend funds on what amounts to a seven to ten-day TDY at the cost of the government, just because something is hosted or organized by AUSA?

Surely these events can be broadcasted via social media platforms, live question-answer sessions stood up, the notes carefully taken and executive summaries provided to those key leaders who need the information. Similar to the US Army’s 2021 Fire Center of Excellence Conference. But alas, the Army has a weakness for AUSA and its micro events. Subordinate SJAs and leaders continually fail to call out the misappropriation of funds and allow dozens of very senior leaders to escape their daily responsibility to be “professionally developed”. Of course, all while hosted in the backdrop of Washington D.C.’s lavish downtown area. It is doubtful that many if any senior leaders are truly stewarding their TDY dollars the way they make their subordinates. It is doubtful that any Chief of Staff is ensuring their general officers are staying in the lowest cost government rate rooms outside of D.C. Hotel preferences are being set by wherever the attendee collects their Hotel point program of choice.

The Army creates rules for the masses and allows a very small portion to ignore those rules for several days, multiple times a year. So one is left asking, if the leaders are ignoring the rules, it must be for a good reason, so what is the gain of pulling multiple senior leaders together all at once? The AUSA website will have its readers believe that the criticalities of the topics presented are must-have professional development and information sharing. Yet nothing tangible is produced except an increase in hotel and sky mile points for the attendees.

With an Army fighting multiple small wars globally, while reeling from the operational loss of its longest one, and struggling to reorganize itself to compete and win in large scale ground combat against near-peer competitors, anything that doesn’t have a solid product to enhance those monstrously complex problems is essentially a distractor. Nothing of substance is produced at these events, except calendar events for more follow-up events and positioning for post-military career jobs. If these events are using TDY dollars to enhance or produce refinement to foundational products like the National Defense Strategy, doctrine or to make decisions, then wonderful. But if not then these events are simply information sharing at a very steep cost in both time and money and something that could be mitigated digitally like 99.99% of the rest of the Army is forced to do. Let’s call it what it is, a boondoggle job fair for industry to smooze future mid-level and senior-level executives.

General Officers are key leaders for a reason; they should make crucial and timely decisions that impact all down trace units, partner units, and impact the collective operational environment around them. Yet the same measuring stick we apply to subordinate level training does not apply to AUSA. Very regularly Soldiers in the Army will want to step up and take on increased individual training, requesting to attend master gunner school, ranger school, or a planner’s course. Very regularly the immediate answer back from leaders who have been conditioned to respond negatively is, “Is this training operationally needed by the unit? Is it a must-have to prepare for a deployment or a rotation?” if the answer is no, the request is denied quickly.

The Army’s culture is one that leaders force requesters to defend requests of anything. This same measurement is not applied to our senior leadership. It is currently just finger drilled or assumed that it is legitimate because the general officer wants to do it. Imagine if General Officer TDY was held to the same standard as they hold subordinates. If a senior leader cannot defend why a seven-day TDY to Washington D.C. is required to make the unit better to their formation or how it will produce something critical to fighting and winning our nation’s wars it should not be authorized.

AUSA has a stranglehold on senior Army leaders. Many are there to job hunt for positions following their time in uniform with AUSA or one of the many sponsoring corporations always in attendance. Many are there to rub elbows or speak to friends that they have not seen in non-work environments for ages or to politic for their next official duty position. AUSA events have taken on the allure of a social event wherein if you are not seen there you are not part of the who’s who, and cast to the outside of the senior circle. TDY money is funding senior leader attendance to the “cool guys” party to ensure their place in the social hierarchy.

AUSA events draw General Officers off of the line and from behind their desk for multiple days to attend one or two, one to two hour discussions. If there is one positive effect it is that AUSA does produce a low-risk environment for the “boys and girls” to get together, smoke cigars, drink overpriced spirits and candidly talk and make decisions.  Some would say that AUSA’s real product is providing a reason to gather every now and then so that backroom deals and decisions can be made. Of course, it is dressed up professionally with a top tier website, event agendas, and invites, but at its base, it is an excuse to get away and let your hair down and speak candidly in nice hotels about issues that are too hard to broach over phone or video telephone conference. Curious if attendance would be the same if events were hosted at Fort Polk or Fort Irwin.

It is slightly disgusting that the nature of these conferences is so overlooked. Army subordinates simply don’t hold their seniors accountable. The rules that apply 365 days a year to most of the Army are given a reprieve once a star appears on one’s collar or chest. It only draws illusions in one’s mind to a quote from George Orwell’s Animal Farm, which commented on the hypocrisy of leaders to proclaim equality and yet only provide privileges to a small elite few. All we Army animals are created equal, but some animals are more equal than others.

This first appeared in The Havok Journal on September 10, 2021.

Joshua is a graduate of Indiana University Class of 06’ where he was commissioned as a United States Army Air Defense Officer. He holds a Master’s in Military Operational Arts and Science from the United States Air Force Air Command Staff College. He serves as the Active Defense Chief at the Army Air Missile Defense Command level within the Combined Air Operations Center.  He additionally served a three-year tour as an Operational Advisor with the U.S. Army Asymmetric Warfare Group as a Troop Commander and the Group S-3. His other works include Defining Cross Domain Maneuver for the 21st Century, the U.S. Army Travel Awareness Handbook and multiple articles within the Small Arms Review and the Asymmetric Warfare Journal.