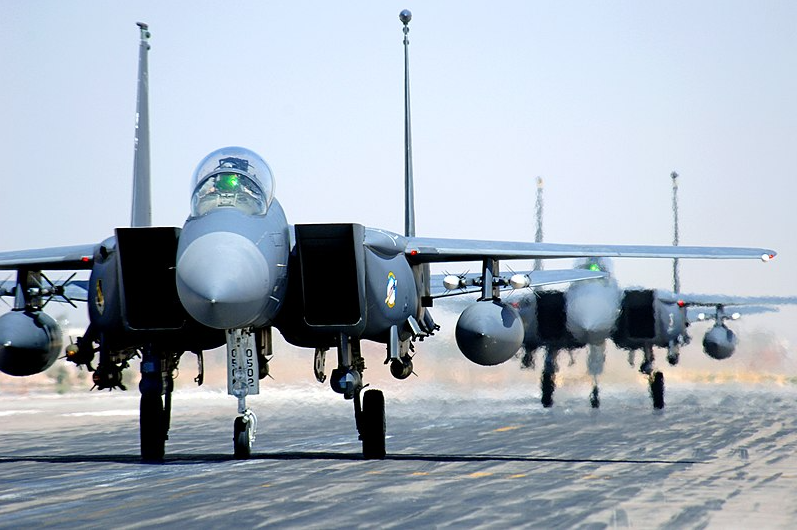 In January 2003 we were deployed to Incirlik AB Turkey in support of Operation Northern Watch. Most of us had a pretty good inkling that Saddam Hussein was getting tired of the 12 years of the Northern and Southern No-Fly Zones established in the airspace over Iraq, and that things were going to turn back to combat operations once again. That feeling came true with the opening salvos of Operation Iraqi Freedom just a few months later. But enough scene setting.

This story revolves around that picture. Sorry, it’s so grainy. It was taken on film of a disposable camera, then printed, and it has been copied and printed again. That’s yours truly in the cockpit of an F-16 being pulled out of a hardened aircraft shelter to go out on a combat sortie. Fun side note – there were nuclear weapons stored in special underground vaults in those shelters. You might think that we’d have been nervous walking on top of nukes but we didn’t give it a second thought.

Anyway – that thing I’m holding in my hand is a cardboard gingerbread man. And he’s the center of this war story.

One of the ladies at our church was a 3rd-grade elementary school teacher. And every time I took trips, she would use my travels to teach geography and social studies. She would let the kids know where I was going and then create lessons around that country. In turn, I would send pictures and buy little mementos to send or take back to them. After returning home, I visited the class to talk about my experiences and let them ask questions. Usually, I took an item of military gear like a gas mask or helmet and the ever-popular MRE. The MREs were fun because the kids were usually grossed out that people actually ate the stuff. In retrospect, the MREs probably didn’t help future recruiting efforts.

I had been doing this for quite a few years by 2003 when she sent me an e-mail explaining that they were doing a version of “Where in the World is Carmen San Diego” but with a cardboard gingerbread man her students had made and decorated. They then imagined the different countries he was traveling to. That’s when an idea hit me. I grabbed a piece of cardboard and a knife and cut out a gingerbread man and then decorated him with some markers.

The next day I jumped up in my jet and had a buddy take the picture. Later that day I e-mailed the picture to her. Because of the 12-hour time difference, our communications were often delayed by 24 hours. A few days later I received a hilarious response.

Apparently, my guesswork in creating the gingerbread man was uncanny. The size, shape, proportions, and decorations were identical. Even one arm was larger than the other one. The kids were convinced that the one in the picture was the one they made. She went on to tell me that she got rid of the original because they were so convinced that theirs had somehow made it to Incirlik Turkey. It was hilarious.

So, for about a week Sgt G.B. Man was photographed accompanying me around so the kids could see what he was doing. Besides generating sorties, he did all the other things a military person does. Laundry, chow, barber shop, commissary, sleeping, etc.

Then I mailed him to a buddy who was in another deployed location as a SeaBee and he repeated the process for Petty Officer G.B. Man. After a few weeks with him, PO G.B. Man got orders to support an Army guy. This process went on a handful of times with different deployed military folks and the kids had a blast following the world travels of Sgt G.B. Man.

Sadly, the fog of war claimed another victim. Perhaps it was the FPO who misrouted his travel orders. Maybe he threw himself on a grenade in an unwitnessed act of selfless heroism. Or it could just be that someone needed to heat up an MRE.

In any case, Sgt. G.B. Man was declared MIA sometime in the summer of 2003 during Operation Iraqi Freedom. His selfless sacrifice is a credit to him, his fellow servicemen, and his country. He will always be remembered in the hearts of those who knew and loved him. Yes, he was a little stiff and two-dimensional sometimes, but he always had a smile on his face, even when times were tough.

Thankfully school summer vacation arrived before he went MIA, so we didn’t have to give the kids the sad news.

Thanks, Gingerbread Man! You brought joy to lots of people during a difficult time. And I daresay the military people had more fun with it than the kids did!

One last side note. This sort of stuff happens quite frequently in the military, but the public rarely sees or hears about it. The war machine is much more human than it is a machine.