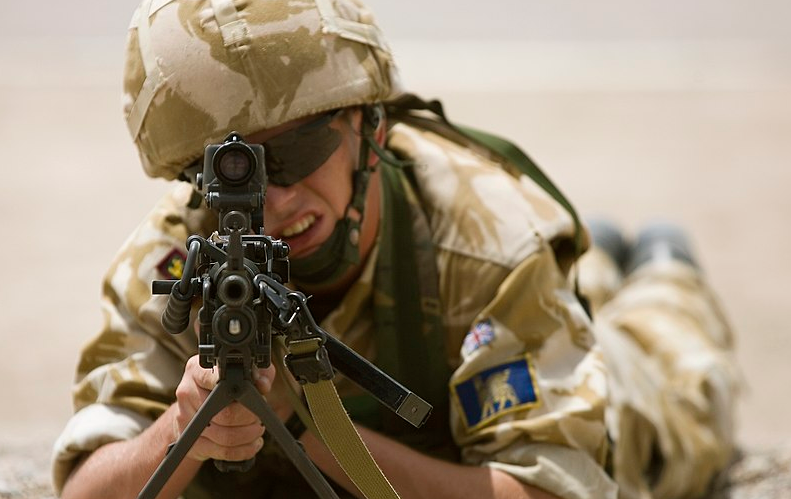 This originally appeared in Vocal.Media as “Tank Park” in June 2021. It is republished here with the author’s permission. Justin is a former UK soldier who served in 3 Bn PWRR. This first appeared in The Havok Journal on September 15, 2021.

Welcome to the Tank Park.

That sounds impressive until you’ve trudged up there for the hundredth time to do a radio check or to check off serialised kit like here in the photo. All the issued kit like night vision gear, ammunition, grenades, etc. had to be accounted for on, I think, a weekly basis.

Magazines would be checked for any lost rounds, with the threat from battlegroup hierarchy that any missing ammunition would see the careless (or unlucky?) soldier fined twenty-eight days pay for each lost round.

One of the section LMG gunners nearly shit himself when he realised that five rounds of link had gone astray until five rounds were “found” and clipped back onto his belt of 5.56. We’d lay everything out, Mike would go round the thirty or so blokes of 2 Plt to ensure that he wouldn’t be having to fill in yet more paperwork than he already did.

Platoon Sergeant, from my limited viewpoint, seems to be not only a massively fulfilling role but also a massively frustrating one.

For Mike that meant advising the new Pl Commander, a recent (but very competent) graduate of the Royal Military Academy Sandhurst, looking after the welfare of all the enlisted men and Non Commissioned Officers in the platoon, taking care of all the issued kit for thirty men, dealing with day to day administrative tasks with the blokes including punishments, and the handing out of responsibilities.

It’s a hard role, so no wonder Plt Sgt’s are often grumpy, pissed off, and generally like a bear with a sore arse. Once they get to know you, see that you’re competent and can be trusted, then the good ones back off and let you get on with it; only stepping in if they need to.

I think I got to that point fairly quickly in A Coy and as soon as we deployed I was being given responsibilities and carrying them out as they were meant to be done. I’d volunteered to be there and I wanted to just be another soldier amongst other soldiers, doing what we’d joined to do.

When we were in the COB, which varied depending on the rotation that we were engaged in, my assigned responsibilities were my Bowman HF radio set and various serialised kit items and then whatever the Boss, Mike, and the section commanders wanted done.

I think 2 Pl stood out slightly from the other two platoons; we were a mostly older Plt and the average age was greater than the normal 18 – 25 as not only was the Plt augmented by seven of us 3 Bn reserve soldiers but there were also some rejoining lance jacks and the Boss was the same age as Mike and I at twenty-eight. He’d been a surveyor on the Isle of Wight, where I’m from also.

He’d gotten fed up with civilian life and realised that time was running out for a career as an officer in the infantry so he joined up, and I first met him in Paderborn when he joined the platoon at the same time as I did. I got on well with all the NCOs in 2 Plt, I was the same age as them, had the same or worse money troubles and I was switched on and keen to learn lessons on how not to die from very experienced soldiers who’d already learned that lesson.

It didn’t take long for me to be pinged as the Boss’s signaller carrying the Bowman HF Radio, so I spent a lot of time with Larry, Mike, and the Corporals, doing my job as the radio op but also just chatting shit with them.

Always respectful, but as men doing the same hard role and not just as commander and skivvies.

They all taught me a huge amount about the whole process of how leadership and respect are gained, managed, and lost again sometimes. I think that’s partly why I get so angry and frustrated with the companies I’ve worked for since Iraq because I’ve seen how you’re meant to treat your people. Yeah, I know, rose-tinted and all that, but I do remember the chickenshit and Mike swearing at us continuously for far longer than was comfortable even for us, but he gave a shit, he genuinely cared about our welfare and how we were doing.

The Coy was under strength, even with us, and in the back of the wagons which could hold seven dismounts normally, there were generally four of us or sometimes three if blokes were on leave.

My first task in the mornings was to go up to the tank park with the other platoon signaller who actually knew what he was doing. I picked it up fast enough as I do with most things, but I still remember the terror of boarding the Merlin Helicopter that first time, a whole twenty minutes of instruction from Matty on how to use the Bowman set, and responsible for my multiples communications with the COB and our warrior patrol group.

I picked it up quickly and was complimented on my skills by the company O/C and CSM; I was being paid to be flown around in wocka wockas, land in an EOD cleared minefield, and then head out across a moonscape where every patch of mud seemed to have piezoelectric anti-personnel mines or jumping jacks, anti-tank mines and old ordinance.

I enjoyed every minute of it and I’d go back in an instant. I really don’t miss serialised kit checks though.