HomeCultureMilitaryA UK Soldier, Before and After Iraq 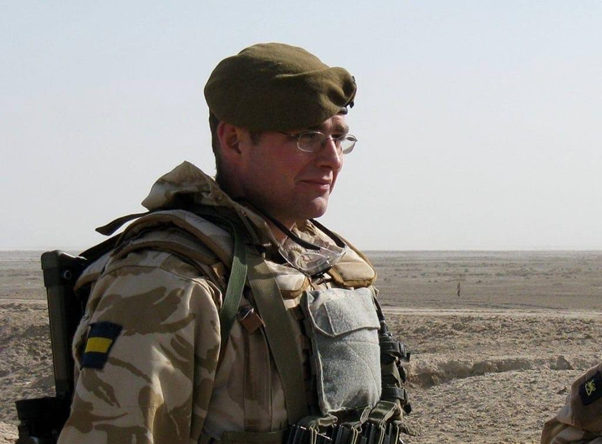 This originally appeared in Vocal.Media as “In Merlin We Trust” in June 2021. It is republished here with the author’s permission. Justin is a former UK soldier who served in 3 Bn PWRR. This first appeared in The Havok Journal on September 21, 2021.

I kinda cringe to be honest when I look at that this photo. It was taken in Germany on a huge training area where we were going through the build-up of live-fire drills. All I had was the issued kit from Chilwell including yes, my Robo-Glasses look, courtesy of the Defence Logistics chain. I hated them but it was what it was, if I wanted to play I had to wear my eye pro.

The thing that makes me pay attention is the stark difference between the photos; inexperienced, no clue really as to what I was doing in Germany, through to Iraq, knowing by then that I was good at what I did. The confidence levels were vastly different that’s for sure; by that point on deployment we’d done pretty much all the different rotations and I’d been a patrol signaller for a while.

I’d already gotten used to and looked forward to the Merlin coming to pick us up, flying just over the desert floor at times with sharp banking turns that enabled me to look directly down through the side gunner/crew chiefs hatch. Bowman carrier straps wound around my right leg just in case we went down and we needed instant coms for a QRF element.

Wandering thoughts and the apprehensions of patrolling the desert highways and villages race through my mind as I stare down at the desert floor spinning past so fast it’s a blur, or looking aft out past the rear gunner/loadie and seeing the shadow on the ground as the stink and the heat of the rotor wash sweep through the compartment and into our faces and throats.

As well as the ever-present fugue of unwashed body armour in high heat, the smell of fuel sticks to our uniforms and kit and even when I came home I thought I could still smell its scent impregnated into my kit. I had to sell that kit for food money not long after I got back from Iraq. I’d met Tracy online before I mobilised and we had moved in together in my flat on the Isle of Wight. I shared the flat with Nick, a friend since childhood, my future best man, and at the time was a serving combat medic posted to an armoured Infantry company who had deployed twice to Iraq.

The economy of the Isle of Wight is predominantly catered to elderly retirees holidaying and retiring there, care homes, tourism of all the normal kinds, agriculture, and the normal British style industrial estates. When the global recession hit on September 15th, 2008, I was, at that mobilising at Chilwell, the Reserves Mobilisation and Training Centre in Nottingham and preparing to join the 1st Battalion, The Princess of Wales Royal Regiment, one of my parent units; me being from the Tiger’s Reserve Battalion.

I demobbed from Chilwell in May/June of 2009 and there wasn’t any work. I tried for FTRS and to join the Regulars but a combination of factors not least my failing mental health, put paid to that. It took six months of unemployment before I got a part-time job, from 20:00 to 12:00, stacking the shelves of the B&Q in Newport. I didn’t know what else to do at the time and my undiagnosed mental conditions didn’t help with the decision-making process.

After another 6 months, I got a full-time job in an industrial laundry and my now pregnant wife joined me, working on the machines until she was seven months pregnant and then had to cope while I secured a better job with an Aerospace company in Farnborough.

That’s a different story which involves me working away from home for 3 months and at least 5 hours away from Trace at night due to ferry times, so of course, she started bleeding one night at dark ‘o’ clock. I’m a hundred miles away and my “about to pop” wife is ringing me at 01:00 and telling me she’s bleeding. I told her to hang up and dial for an ambulance immediately while I rang Nick.

My friend, his then-girlfriend, and another mutual mate tore out of the house and raced to Trace, and while Nick rode in the ambulance, Emma and Fluff broke all the speed limits to race after it. They got pulled over by a copper who understood the situation and who kindly escorted them at speed to St Mary’s Hospital.

Thankfully it was a false alarm and Finn Patrick was born later that week, and I finally managed to reach the Isle of Wight and my new family.