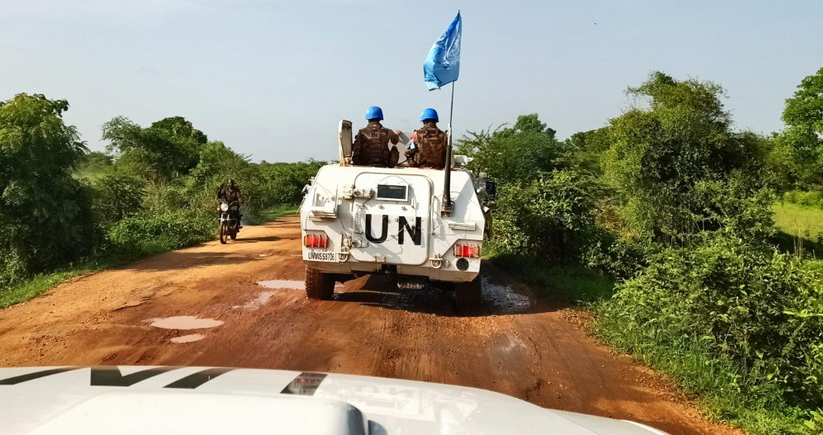 I leaned back in the cheap, plastic garden chair underneath the village mango tree and listened to the dove’s coo in the distance. I gazed out towards the beautiful, verdant wilderness and farmland of the fertile Equatoria region. I saw the haze and smell the woodsmoke of cooking fires, and watched coloured birds flit amongst the trees. I moves my combat boots forward slightly, into the brushed dirt floor of this village meeting place, as I felt one of the village dogs crawl underneath my plastic chair, seeking shade and security. His gentle snores a few minutes later told me he had fallen asleep.

This sleepy, peaceful setting was at odds with the tension that I was about to feel in this meeting. The entire village had congregated on this meeting today, expecting seeds and farming tools to be delivered. These had reportedly been promised to them by a previous United Nations patrol. I observed the malnutrition as soon as I walked into this village – the gaunt faces, and taught ribcages on adults and, heartbreakingly, the thin limbs on some of the infants and small children. The chief was wearing his best clothes in anticipation of receiving these long-awaited farming implements. It was forecast to be a big day in the village. This was the day they could get back to their ancestral pastime of subsidence farming.

I was about to disappoint them.

I explained to them that I’d come as a Military Observer, not as a Non-Governmental Organisation representative. I told them that I conduct patrols, build relationships, and gather information. I negotiate with checkpoints, manned by government troops and opposition forces so that humanitarian agencies and patrols can get through. I increase situational awareness across the mission – I report, verify, and corroborate information. But mostly, once the patrol is complete, I write reports. In fact, I don’t have the ability to access or deliver any humanitarian aid. I explained to them, that it was the responsibility of other, civilian-led, parts of the mission. Though I write reports, talk to people, and try and influence decisions.

I further explained that South Sudan is a large country, and there are huge levels of suffering. These United Nation mission pillars, such as Food and Agriculture and the World Food Programme are doing their best, but they are working within what they have. Sometimes, it is a drop in the bucket. As a military observer from New Zealand, one of three in the whole country, I, unfortunately, did not have seeds, or farming tools to give them.

The disappointment was immediately visible. The chief, at length, told me how four months ago, cattle raiders looted their village. Entire crops were destroyed. Personal items, tools, and anything of value from within the village were taken. All livestock were stolen, and it was then that the missing piece dropped into the puzzle. I’d felt something unusual about this patrol – I hadn’t seen a single goat or sheep the whole time. Apart from a couple of scrawny dogs, the only domesticated animals I had seen were a few chickens scratching about in the yard.

The chief told me how his proud people now subsided on foraged ground nuts and fruit when it was in season. They had worked hard making charcoal, which could then be sold to buy food. The borehole was broken, and the village now drank unfiltered creek water. He told me that they did not want food handouts and instead wanted the means to work and provide for themselves. The meeting flowed in its customary manner; I would ask a question, Moses, my language assistant, would translate, and the chief would answer, sometimes with inputs from members of the community.

I noted the lack of a school in the village and the lack of a health clinic. The children walked five kilometers to school each day, in the next village over. I asked the community women, with their gnarled, calloused hands, stripping nuts from the plants they foraged if there was anything they felt comfortable telling me. One woman, with her baby strapped to her back and once more visibly pregnant, told me that their biggest fear was complications with childbirth.

The community did not have a car, so any birth complications likely resulted in the death of the mother, child, or both. The nearest health clinic was five kilometers away. I asked the Matriarch of this group of women, who wore her wrinkles and grey hair with pride, and carried a walking stick with a sense of officialdom, what she thought. She raised her hands in the air, with a sense of weariness: “All has been said.”

It’s easy to get depressed in this mission. The lack of progress, the superficialness, and lack of competence amongst many of the troop-contributing countries. The smug contentedness of some of the civilian employees, who are just here for the steady paycheck of crisp greenbacks. Perhaps selfishly, to make myself like I’ve accomplished something, I often carry my own humanitarian aid; surplus medical stores from those teammates who have RIP’d out, children’s clothes, hard to come by over here and sent from family back home, exercise books and stationery, and basic food items.

I have a 20kg sack of rice in the back of my truck, along with some children’s clothes. I spoke with my language assistant and host nation security force enabler, about the best way to help. What I have, clearly isn’t enough for the whole village – should I donate it, possibly risking a fight, or just leave it be? After deliberation, I closed the meeting, thanked them for their time, for accepting me, and reaffirmed their priorities and concerns. I told them I would work hard to have their needs prioritized and addressed. I mentioned that I have some items, that I would like to donate as a personal gesture of friendship. I stressed, that it wasn’t enough for the entire village. But that perhaps, with the Chief’s blessing, the community could ensure that it went to the most vulnerable. The chief agreed, and I fetched the items from my truck.

For a donation I was initially afraid to give because I felt it too insignificant, they expressed humbling gratitude. I saw smiles, felt handshakes, and received blessings. They affirmed, again and again, that this was the first time somebody had given them an act of kindness. Patrols came and went, vehicles drove through, without stopping, yet they told me they “felt seen” this time. After handshakes and goodbyes, I left the village and walked back to my truck to start the drive back to the camp. As I mounted, I looked back to see the villagers still gathered under the mango tree. The women had taken charge and, with ground nut plants temporarily forgotten, saw them placing the donated items into piles for the intended recipients.

It was only an hour, bouncing along dirt roads before I arrived back at the UN compound. I patrol often, and had seen a share of suffering, death, and extreme poverty. I’d been told firsthand reports of absolute brutality that had been committed, sometimes only hours or days before, against members of this country. As in most conflicts, it is the civilians who often bear the brunt of conflict. Yet, somehow, I came back from this patrol feeling different. I felt a strange sense of transcendence, and I can’t explain where it came from.

I saw and laughed to myself at gaudily dressed soldiers of a troop-contributing nation, fussing over the baubles and ornaments of a senior officer’s car. This was an officer who, I’m only speculating, rarely left his own little fiefdom here on camp. I saw UN civilian permanent staffers, dressed in polos and 5.11 trousers, with their large bellies seemingly guiding them by instinct towards the on-base restaurant. Here you could buy a cheeseburger, fries, and a coke for USD$7. That was a month’s salary for a soldier, teacher, or civil servant here in South Sudan, who were five months in arrears in salary payment. I overheard civilian staffers talking about what party was on tonight, and whether Plan B, the on-base bar, would be worth checking out later.

I don’t resent or feel any animosity towards these people even though their experiences, feelings, or thoughts toward South Sudan don’t match mine. This is the world’s newest, but also one of those most corrupt and failing countries in the world. Many people probably don’t care about this place, its people, or its future. It’s just a job, a chance to get paid, a chance to have a good time. There are so many thoughts, observations, and feelings to process that come from a place like this – feelings and thoughts that are difficult to describe, often contradictory, and are often hard for others to relate to. Rising above all though, I felt a deep sense of privilege.

I’m privileged with the opportunity to serve here and afforded the chance to go out on patrol and observe the daily reality. I’m privileged to try, at the very least, to bring small, meaningful change, and alleviate human suffering. Even if it is only for a short time. Or at least, I can make another human being, feel valued and seen.

Even if it is just for a moment.

Ollie is a currently serving New Zealand Army officer with a background in Fires. He has deployed on a number of operations across the conflict spectrum and has served as an instructor with operational staff.