While I’m proud of what I did during my multiple tours to Iraq and Afghanistan, I never experienced anything that would have caused me to develop PTSD. And, if they’re honest with themselves, I think most veterans would say the same. After going through the rather awkward process of convincing my doctor I did NOT have PTSD, I followed is advice for treatment of sleep apnea: I stopped having my usual nightcap of a double shot of Gentleman Jack before bed, I started getting more exercise, I lost weight, and I changed my sleeping habits. Although I still sleep like crap, my other symptoms went away. I never had PTSD.

But some people do have PTSD, and they’re not all in the military. In fact, the majority of people who have PTSD aren’t vets. But regardless of how PTSD is acquired and how severe it is, everyone legitimately suffering from it (and especially those who are undiagnosed) suffer when spurious or suspect claims are made. 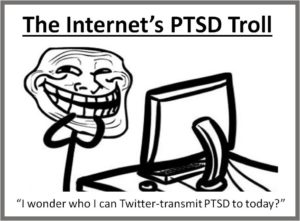 This brings us full circle to Melody Hensley.  Not only do we not know for sure that she really has PTSD right now, we don’t even know for sure that she was even really diagnosed with it.  All we know right now is that she CLAIMS she was diagnosed with PTSD; she carefully avoided naming the doctor who diagnosed her, or to offer any other supporting evidence. Yet everyone believes her anyway.  I think that says something about us as a society.

Many people think that Melody Hensley is crazy for claiming that she got PTSD from mean Twitter posts, but I don’t think that at all. Whether or not she legitimately developed PTSD from mean tweets, I think she is shrewdly manipulating the wave of attention being thrown her way by attaching a sympathy-garnering label to herself and adroitly playing for sympathy by claiming to have a disorder that very few people actually know anything about. And the backlash that has been generated against her simply plays into her hands. All of the (largely justified) attacks against her merely make her “victim card” easier to play, and gives her even more attention and credibility in the communities in which she is seeking to make a name for herself.

Melody Hensley says “I will not be silenced.”  No one wants to silence you Melody, we just don’t want to hear you saying stupid things at the expense of those who are truly suffering, and whose PTSD can’t be solved by pushing the “off” button on their iPad.