HJ:  In a previous interview you said, “Just because you were dealt a shitty hand doesn’t mean you need to quit. Take whatever situation happened to you, turn it around and help others.”  What are you doing with your current hand?  As only the 10th living recipient of the Medal of Honor since the Global War on Terror began, do you have any specific plans or goals to help others through your lifelong status as a MOH recipient?

Flo:  I do.  Right now, I’m in the planning phase of the OPORD.  I’ve got to put everything together.  I want to specifically focus on education and the homeless.  Our veterans’ education and homelessness, it’s so freaking high it’s disturbing to me.  I want to figure out, what I can do.  What can I focus on, to make a difference? And when I say make a difference I mean a big, positive, difference. I believe that, one of the stats I was given, 33% of our male homeless population are veterans.  That’s outrageous. We’re talking about individuals who were drafted or volunteered to serve our country who are now living in the street.  How does that happen? What causes that to happen? And how do we fix it? How do we help them out? What can we do, to get them off the street and allow them to live a productive life, and guide them to go back and help others, because they will become the best example and advocates to other homeless veteran individuals. 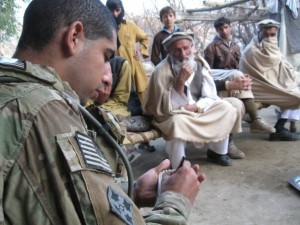 I can go out there, all day, everyday, and go “Hey look, we can get out of here, we can do this,” but how much more powerful would it be for a homeless guy to become successful again, lead a good life, start his family, get a job and go back into a homeless community and say, “I was in your shoes. This is what I did. Follow me and we’ll get through it together.  And after that you’re going to have the opportunity to go back and help somebody else.”  I want to figure out a way to do that. I know there is a lot of great organizations that are doing that, but I just read you that stat 33% of our male homeless population are veterans, so we’re doing a great thing but we’re not doing enough.

I want to make sure I use this platform I’ve been given, this voice that I’ve been given to go make a difference, because it’s going to become one of my lifelong goals and I’m not going to quit until I’m six feet under.  That’s what I want to focus on. So now what I’m trying to accept is “How do it do it?”  I don’t want to go out there and say “Oh I’ll do that, I’ll do that.” I want to make a difference, I want to be 100% committed into it. That’s the goal.

Everybody can make a difference but I learned this early on, after the Medal, when I was in LA, one of the veteran’s looked at me, he said, “So now that you have this Medal, you have a voice, you have a platform, what are you going to do to help us?”  That was one of those questions I was definitely not ready for, and I answered it the best that I could. I said, “Look, I know I have a voice and platform, and I 100% want to make a difference but I have to figure out exactly how I can do it, and what I can do.”

Major Mike Kelvington grew up in Akron, Ohio.  He is an Infantry officer in the U.S. Army with experience in special operations,  counterterrorism, and counterinsurgency operations over twelve deployments to Iraq and Afghanistan, including with the 75th Ranger Regiment. He’s been awarded the Bronze Star Medal with Valor and two Purple Hearts for wounds sustained in combat. He is a graduate of the United States Military Academy at West Point, a Downing Scholar, and holds masters degrees from both Princeton and Liberty Universities.  The opinions expressed above are his own, and do not represent the official position of the U.S. Army, the Department of Defense, or the U.S. Government.

This first appeared in The Havok Journal January 4, 2017.