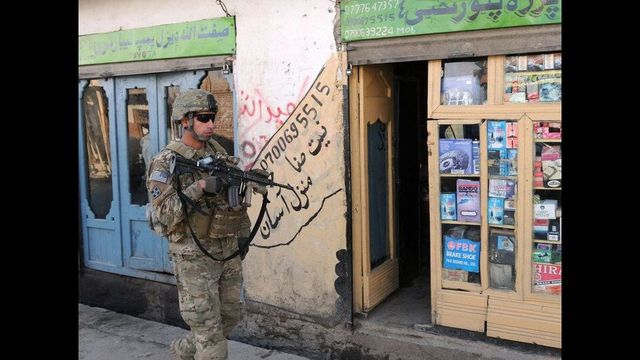 Editor’s Note: This is the second installment of our interview with Medal of Honor recipient Florent “Flo” Groberg. You can start the series from the beginning.

HJ: During the day of the battle in Kunar Province, “in the moment,” what motivated you to make your split second decision to rush the suicide bomber? Later, what was your motivation during your recovery period at Walter Reed and fight on?

Flo:  As you yourself know perfectly well, we’ve all trained so much, and there’s a brotherhood with the people you feel around you, that unconditional love, that you can’t explain.  My motivation was that I had a job to do, “protect the boss at all costs.”  My attitude was, if I have to lay down my life so he can come home, then that’s how it works.  So when I saw that guy, I anticipated a threat, and when I grabbed him I felt that he had a suicide vest on, I just reacted.  The way we react is the way we were trained for all those years, plus we add the love for the boss, I just did what I had to do. 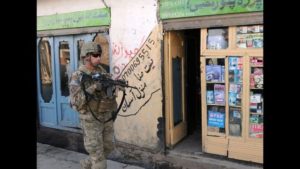 And what I had to do was get him away from the boss; as far and as fast as possible. So a couple of us grabbed him and we got him away from the boss.  But he still detonated, and blew me about 15-20 feet, took a good chunk of my leg.  More importantly, we lost four good men:  CSM Kevin Griffin, Major Walter Gray, Major Thomas Kennedy, and USAID Foreign Service Officer Ragaei Abdelfattah.

And then I was in the hospital.  When something like this happens, there’s always the sense of “I wish I would have done more, that I would have done things differently.” During my recovery, talking about ups and downs, I was angry, pissed off, sad.  I went through all of those emotions. “Why am I still here and they’re not?” I wrestled with that for quite a bit.  But what really helped me was the support.  I had support from my family, my friends, from the military, from the incredible care I received at Walter Reed.  But what really helped me was the support from the other wounded warriors.

I remember being in my room one day, pissed off, not wanting to talk to anyone, I wanted to be back in Afghanistan doing my job.   Another wounded warrior came into my room.  His name was Travis Mills and he was wounded far more severely than me [quadruple amputee].  He came into my room and said “What a great day to be an American!” And he’s all smiles, ask me how I’m doing, and I’m laying there thinking “What the…?” And he sits there with me in my room, cracking jokes, making small talk, and then he’s gone.

It was at that moment that I thought, “I’m done being weak.  I got a second chance at life!  I needed to quit feeling sorry for my little boo-boos because they are NOTHING compared to the majority of people here in the hospital.  At that moment I made a choice, a personal choice, to never complain about my injuries.  I wanted to get out there, do all the rehab they wanted me to do so I could get back on my feet and get out there and make a difference.

I wanted to get out there and tell everyone, “Hey, these people who serve our country, are the best people you will ever meet.”  Most people don’t understand that what we do is pretty simple, but if we make a mistake, then someone to our left, or right, or front, or rear, doesn’t come home.  So many of our wounded warriors are young; young soldiers, young officers, young NCOs.  People need to know about that.  So I thought “I’ve got to do a lot more.”

HJ: You recently experienced a series of life-changing events: you were gravely wounded, necessitating many surgeries on your leg; you received the Medal of Honor; and you were medically retired from the Army.  During your recovery at Walter Reed, you mentioned that you were inspired by other wounded veterans, including Special Forces officer Kent Solheim.  What did Kent say or do that helped you during your recovery?  What message do you have for other individuals who are dealing with life-changing illnesses or injuries or who have to leave the military sooner than they expected?

Flo: Kent Solheim is incredible.  They used to call him Captain America.  He was such a beast at Walter Reed. I remember meeting him for the first time after a patrol.  We got off the helicopter and General Mingus leans over to me and says “You see those four guys coming this way?  Which one do you think is missing a leg?”  I looked at all four of them and couldn’t tell.  Fast forward a few months later and I was at Jalalabad, Afghanistan, and I was running the long perimeter route there, trying to stay in shape.

And to motivate myself during the runs I tried to catch up to the people who were running in front of me.  And there was one particular guy way off in the distance, and it took me forever to catch up.  As I got close to him, I recognized him as one of the people General Mingus had pointed out to me.  And he looked a little different… because he had his “running leg” on.  So I got to meet him, and hear his story, and I find out later that just a couple of months after his amputation he’s running, and placing in these major marathons.

So when I initially received my injury, and I looked at my own leg, I remember thinking, “Ok, well, that’s gone.” And I wasn’t even angry or sad about it, I was just concentrating on making sure I had a weapon in my hand and then concentrating on killing anyone who was trying to kill me.  And while I was lying there I remember thinking, “It’s only a leg.  Kent Solheim is a MONSTER and he’s missing a leg.”  That’s why later when the doctors were saying, “We may have to take your leg,” I said, “OK, it’s not the end of the world.”  I had the right person to look up to.  He came to visit me at Walter Reed.  He gave me a lot of emotional support right when I needed it and he was a huge part of the mental recovery necessary for me to get back on my feet.  I just understood, through him, that anything could be done, that I’m still going to be able to have an outstanding life and go out and do what I need to do. 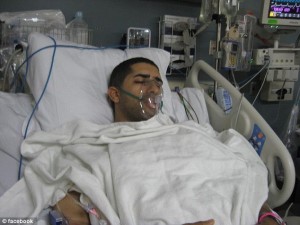 Keep a positive attitude. That’s what I learned. Find a positive in every negative. In this case, I was taken out of the Army.  So I was very depressed and distressed about that for awhile. And through Travis Mills and all the other guys I met during my little journey at Walter Reed, I realized that, “Hey I’m just grateful and thankful I got the opportunity to serve my country.” I wish I could have done it for longer, but that was not my path anymore.  That door closed, and another one opened.

After that I was going to go serve in DOD and do something else and I loved it.  That’s sort of closed a little bit when the Medal happened, and so, you go through another little exciting moment, I guess, and then you come back you think again “Okay, well I wasn’t planning on that but I’ll do that too.” Now I have a platform, and a voice to make a difference in the Veteran’s community. I can help, I can do a lot more than I could have ever done actually serving in the military or DOD. I’ve been given the opportunity to go out there and make a difference.  It’s all about me taking the steps and doing the right work and making sure that I keep the faith and do everything in my power to make a difference.