HomeCultureFamilyFlags Instead of Fathers and Husbands 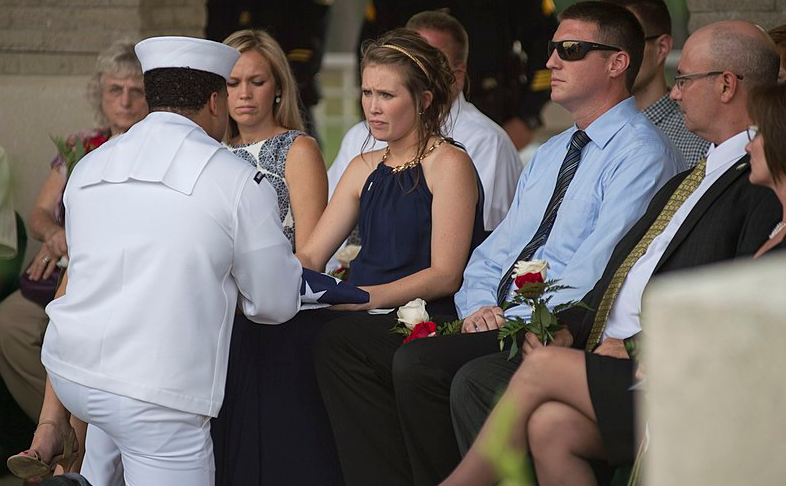 by an anonymous USAF brat

It was the lace curtains that did it. Like most guys, I’m pretty good about not tearing up at movies, especially war movies (Old Yeller being the sole acceptable exception).  But seeing Madeline Stowe stand by those lace curtains in Mel Gibson’s “We Were Soldiers Once…” took me back.

It was Spring of 1968. We had moved off base from Wright Patterson AFB to a small house in Fairborn, Ohio. All the men in Dad’s unit were getting orders to Vietnam and he expected to get those same orders soon. Wanting to be sure we were taken care of, he dutifully took out more life insurance “in case something happens” and moved us off base. Being adopted and with Mom being from Germany, there were no real “relatives” to move home to so he wanted us to be near our Air Force family “in case something happens.”

The day before he left, I remember the activity in the house. Mom was busy with laundry but looked pensive and worried like she was trying to not think about something. Dad was putting things in his B4 bag and took out his hunting rifle, cleaned it and, wiped it down with an oil rag before putting it back up on the rifle rack that hung in their bedroom. He also cleaned, oiled, and loaded his .357 Colt revolver and put it in a case near the B4 bag.

I didn’t understand what was going on in the house. I remember watching Dad dry fire the rifle and putting my fingers in my ears thinking, “This is going to be loud.” I don’t recall too much of that day other than Dad tucking me into bed, leaning over to softly kiss my cheek, telling me he loved me and to sleep tight.

The next morning, I got up to my bowl of Sugar Pops expecting to see Dad before he went to work and he was gone. Mom tried to explain it to me but my 6-year-old brain could only process that Dad was gone.

I knew that bad things were happening in some place called Vietnam. One Sunday in church, Brother Clem made some announcements and everyone in the church looked back towards the doors where you entered the sanctuary. I looked back like everyone else and there sat a young man in his Marine greens. I remember the 2 red stripes on his arms and the way his pant legs were ironed and folded, tucked up under his torso as he sat in the wheelchair.

His pretty young wife was standing behind him pushing the wheelchair. They lived a few houses down from us off base and he had been to that bad place. I overheard my parents talking about it and Dad saying that he lost his legs crawling through a minefield. I was too young to understand the horror of war but saw the grim look on Dad’s face and the stark fear on Mom’s.

My mom went on that morning, explaining that Daddy had left for a place called the Philippines and we’d be together again in 9 months. All I knew was that bad things were happening to men in uniform and my Daddy was gone.

I went to the main window of the house where Mom had put up lace curtains. I stood by the 2-tier bookshelf and looked out the driveway for the VW bug. “Daddy, please come home! I’ll be good, I promise, please Dad come home. Daddy, I love you, I’ll be a good boy, I promise Dad. Daddy, don’t leave…”

I spent all that day and most of the afternoon asking my Mom to spank me. I thought I had done something to make Dad leave. I never realized that forces at echelons above reason had decided we needed to spend our young men overseas. And for reasons, most of them didn’t quite understand.

As I sat in the quiet, dark movie theater some 40 years later and watched Madeline Stowe run after Mel Gibson down that dark street in the dependent housing area, those memories came flooding back. I began to weep. I wept for the times that my Dad was gone on missions and we didn’t know if he was coming back. I wept for all the men who were lost in that small patch of ground known as the Ia Drang Valley. But most of all, I wept for all the little boys and girls and the rest of the dependents who are now getting flags instead of fathers and husbands.

My Dad survived his service. He is now a happy grandfather to two very successful grandchildren. Mom died last year from dementia and I got to watch him keep his vows to love and cherish in sickness and in health. Long before she died, Mom put up lace curtains in the living room. Every once in a while, as I stand there, a little tear forms for those that didn’t come back… and for their children.