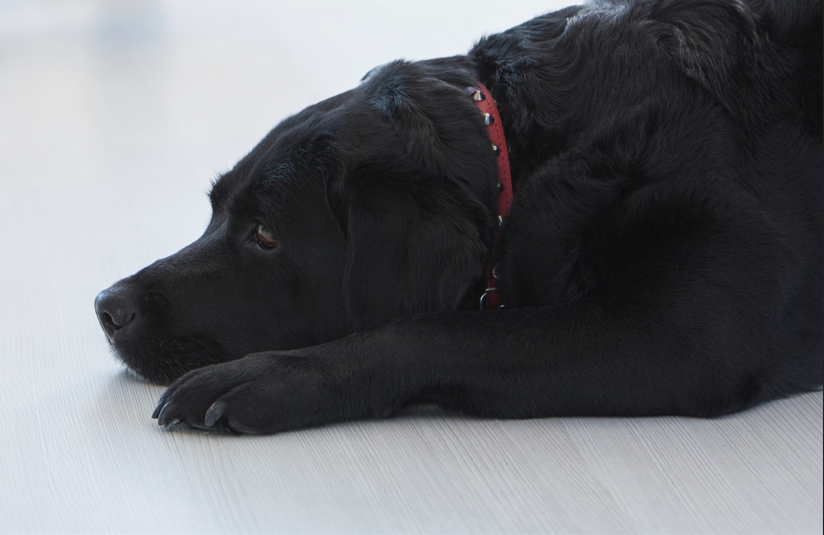 This first appeared in Frank’s blog on September 9, 2022. It is republished here with the author’s permission.

I woke at 3:00 AM. I couldn’t sleep. I got up and went to the kitchen to make a warm bottle of oat milk for our little grandson, Asher, in case he woke up hungry. I turned on a light and saw one of our dogs lying on the living room carpet. Sara stirred, and then she staggered around the room in confusion. She looked rough, and she moved haltingly.

Sara is eighteen years old. She is a terrier/dachshund mix. We got her at the Humane Society ages ago. Our daughter, Hannah, picked her out. While we were getting the paperwork completed to adopt Sara, Hannah stood in front of her cage to keep other visitors from looking at the dog. Hannah took care of Sara, well, most of the time. Sara was wound tight when she was young. She had that little dog edginess. She was a beautiful animal, jet black in color.

When Sara got up from the floor this morning, I noticed dark markings on the carpet. I looked closer. They were blood stains. I thought to myself, “Now, what the fuck?”

Sara had been having some difficulties recently. The years were taking their toll. A couple days ago, my wife noted that Sara’s doggy bed stank. It did. Karin bought a new bed for Sara, and I threw away the old one. When I picked it up off the floor, I found that it was soaked with urine (as was the carpet). Sara hadn’t been getting up to pee. She wasn’t hardly eating anything either. Sara was struggling to move around, and she was obviously blind. I don’t think she could hear very well anymore either. Her black fur had changed color over time. Sara’s face was almost completely white.

Sara irritated me at times. Because of her disabilities, she was often underfoot. More than once, she almost tripped me. I remember losing my temper, and yelling, “Goddamn stupid fucking dog!” as I shoved her out of the way. I felt bad as soon as I said that, but the damage was done. She was scared of me.

It took me a while, but I finally noticed that Sara had blood on her face just below her right eye. The wound was oozing slightly, and Sara was occasionally rubbing her muzzle on the floor to wipe off the blood. I kept an eye on her, and I waited until Karin and Asher woke up before I attempted to take Sara to the vet.

I tried to go to our regular veterinarian, but I was told to call the ER at a local animal hospital. I did, and the lady at the ER told me to bring Sara to them. Karin planned on going to spend time with her knitting group, so I took Asher along with Sara and me to the hospital. I figured that Asher could look at the other pets while Sara was examined.

Eventually, Asher and I were taken into a small room to consult with the vet. The veterinarian was a sturdy-looking woman with a soft voice and a no-nonsense manner. She explained to me that Sara, probably due to her blindness, had bumped into something and cut her lower eyelid, making her right eye bloody. The vet mentioned that Sara had a full cataract on that eye. Then she asked me, “Did you notice the blood inside of her left eye?”

She went on, “Sara has blood inside of that eye. That could be from high blood pressure or cancer. The left eye also protrudes somewhat, and that could indicate a mass behind the eye that is pushing it forward.”

We talked about Sara’s current struggles to do much of anything on her own. The doctor asked me, “Are you primarily concerned about her quality of life?”

I did not answer that directly. I told the doctor that Sara was old, very old.

She asked me the question again, and I babbled a bit more.

The doctor asked me a third time, “Are you concerned about Sara’s quality of life?”

She talked about euthanasia without ever once using the word. She finally told me, “We could do her a kindness by ending her suffering. This is something I can do for my patients that regular doctors cannot do for theirs.”

I asked her, “And how do we go about providing this kindness?’

The vet described the procedure. It was really quite simple. I guess killing can be that way. She emphasized that death would be quick and painless.

I told her that I had to call my wife first. She told me to take my time.

I called Karin. She concurred with the decision to put Sara down. I told the vet.

Asher and I sat in a little room specially designed for euthanasia. Asher, being a toddler, wanted to look at everything. A lady came in to take care of the billing. She also wanted to know if I wanted to take home the remains. I told her “No.” As Asher and I waited, I quietly cried.

Eventually, the vet came in with Sara. She asked me, “Have you ever witnessed a euthanasia before?”

“No, but there is first time for everything.”

I remembered another dog we had years ago. He was part beagle. He was named Francis. Francis was a strong dog, but dumb as a bag of hammers. He ran into the street one day and got hit by a truck. I watched the light go out of his eyes as he died.

Sara was on a gurney. She was calm. I had Asher pet Sara. Then I placed my hand on Sara’s neck and silently asked her to forgive me. The doctor gave Sara an intravenous sedative. Sara visibly relaxed. Then the vet injected her with the poison. I noticed no difference with Sara. The doctor checked the dog for a heartbeat. Then she nodded and quietly said, “She’s gone.”

How quickly a soul departs.

The vet asked again, “Do want more time with her?”

“No, I need to take this little boy back home.”

I thanked the doctor for doing good work.

Asher and I are home again.

There are still traces of blood on the carpet.