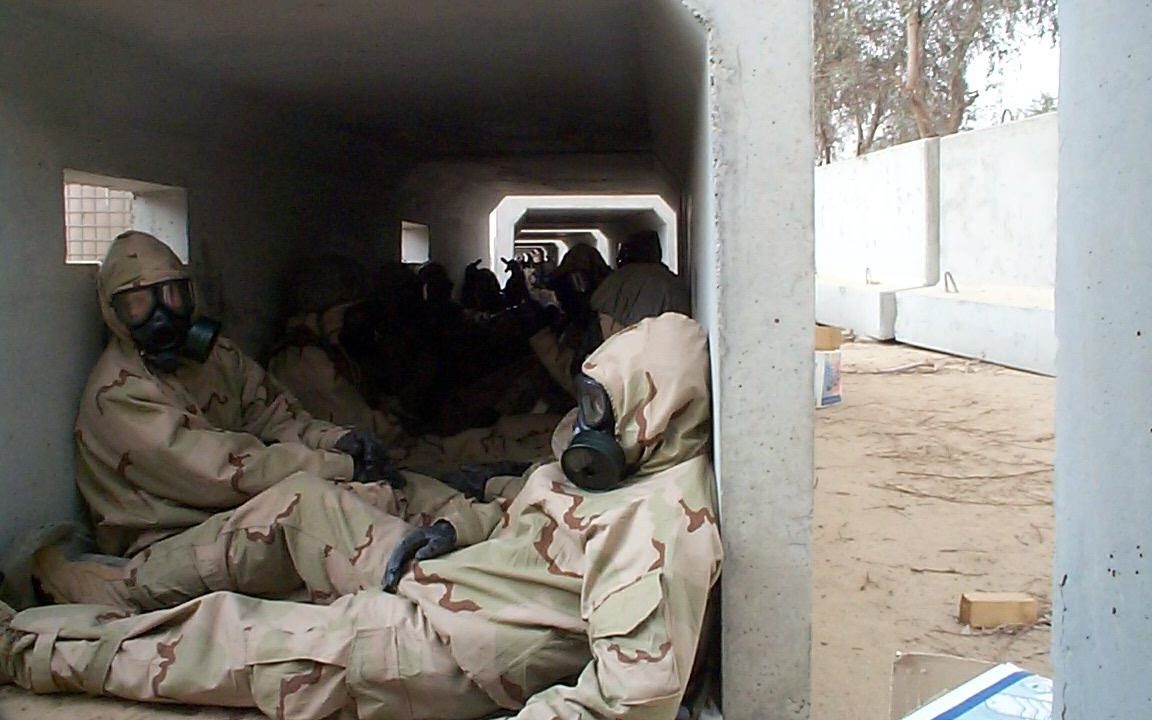 Perspective, it’s how we look at something now can be light years away from how it appeared at the time.

A long time ago (17 years ago, to be exact) a bunch of troops prepared to go to war, in Iraq. Range training, individual and team movement, and physical conditioning. We trained for all of the usual stuff, with one added burden. THE THREAT. Iraq promised to be different in other modern conflicts involving  US personnel in the fact that there was a high probability that chemical and biological weapons were going to be used. I can imagine the collective rolling of eyes by the readers as “the Boomer” goes down the NBC rabbit hole. But again, it’s a matter of perspective. That’s what we believed at the time.

For those that were in the buildup for OIF 1, we prepared for the fact that we were going to get slimed. In CONUS, troops spent time in gas chambers testing masks and receiving briefings on responding to NBC threats. In Kuwait, waiting to jump off, we had the “BIG GIANT VOICE” tell us to MOPP up and go to “BUNKERS NOW!” during endless practice exercises. All of the intelligence being received pointed to chemical and biological weapons being stockpiled and moved to different parts of the country, all being prepared to be used against Coalition forces. We prepared for the horror of house-to-house fighting in full chem gear, in cities like Baghdad.

We had contingencies for our base getting hit. I was told by a reliable source that if any base in Kuwait was hit, the plan was to decontaminate troops in theatre, then strip them naked and load them onto cargo aircraft to be flown to Germany, where we would receive further decontamination there. We’d leave everything behind in Kuwait and it would be set on fire by aircraft with incendiary munitions. Not a pleasant thought.

I’ve spent most of my adult life carrying a gun for a living, as a soldier and a cop. I’m no stranger to being shot at. I don’t like it (obviously), but I can deal with it. I can get behind cover, return fire, maneuver out of the way, etc.

That’s not the case with bio or chem weapons. A fatal virus can pass through a particulate filter of a gas mask like a mini cooper driving through the Lincoln Tunnel. MOPP suits made by the lowest bidder, sealed at the seams with 100 MPH tape. The chemical kit in its entirety is nothing more than a convenient body bag for mortuary affairs to scoop you up in. They should put handles on the sleeves and pant legs so it’s easier to pick you up and toss you into the fire.

So, in late March 2003, when the Scud and Al Samood missiles started raining down on little Kuwait from Iraq, we prepared for the worst. When the first missiles hit, I’m not going to lie, I was scared. It embarrasses me to admit that, but it’s true. Very little in the “Life Or Death” realm really scares me. I’m cautious and prepared for when the shit hits the fan but I’m generally in control of my emotions. I put on my game face and sort things out.

Initially, this was not the case during the first attack. I let those bugs go to my head, picturing them sneaking through the seams in my chem suit. You can’t hide from a few molecules of VX gas. If there is a chink in your armor, the bugs will find a way in. My only saving grace was that I was wearing a mask so no one could see the look on my face.

In times of crisis, we look to others for inspiration. Mine came in the form of a Special Forces Major. He was obviously a prior-enlisted soldier because he looked older than dirt. He reminded me of an old, grainy black and white picture of a Civil War General. He had a weathered but kind face, red hair that was a bit on the long side and a red mustache. As we sat there in the bunker (a reinforced aircraft hanger) he walked around as if nothing was happening. He said words of encouragement like, “It’s going to be okay folks, we’ve been training for this the whole deployment”. He spoke with individual soldiers who appeared scared. He made jokes and tried to keep things light. As an aside, having a Southern twang adds a bit of sincerity to those types of statements, but it’s not required.

I’m guessing he was scared too, but he didn’t show it. He registered modest calm in the midst of a crisis. At that moment I tapped into my “Inner life coach” and had a hard talk with myself. “You need to start acting more like Jeb Stuart there”. I flipped my internal switch from “panic” to “outwardly calm” and got my mind right.

In reality, my existential crisis probably lasted all of two minutes but long enough to know, that if I had allowed it, my fear could get the best of me. As a leader, I could spread this to my troops the same way the imagined Anthrax could infect entire populations. I was done being scared of it. I put Chem and Bioweapons in the same category as bad guys bullets, something to be wary of, but not to the point where it takes hold of your emotions.

We bore witness to a couple of different reactions on the extreme ends of the fear/no fear spectrum. There was a SEAL team stationed with us in Kuwait. They refused to participate in the NBC practice drills. During the first real missile attack, a scene played out that was funny for the viewers, not so funny for the involved party. As everyone was fully kitted up with masks and suits,  a lone Navy SEAL was frantically ripping the contents out of a duffel bag, trying to find his pro mask! Probably the first thing he put in there when leaving Little Creek and hadn’t given it any thought until now.

In contrast, a different situation played out in the chow hall on day 3 of the missile attacks. It was breakfast time and the troops were eating when, all of a sudden, The BIG GIANT VOICE went off, telling us to hit the bunkers. One crusty old Green Beret was halfway through his frosted mini-wheats. As everyone else scrambled out, he sat there calmly, finishing his breakfast. Today might be his day to die but, he didn’t care, he was going to finish his meal. I think his name was Honey Badger….

For three days the Bakr boys slammed Kuwait with missiles. I think the grand total was 17. As far as I know, none were chemical or bio munitions. Not a lot of hardware, but in a small country without a lot of real estate, that adds up. It never became routine, but I saw myself and others acting like leaders and taking charge. Once, during a missile attack, I got into an argument with my NCOIC and my First Sergeant as to who was going to be the last one in the bunker. We all felt that it was our responsibility to make sure everyone else was safe first before thinking about ourselves.

So, as the threat of COVID-19 looms large across the globe, remember- how you present yourself will influence those around you. Don’t spread the contagion of fear. Make your peace with the virus, do what you can to prevent getting it, but accept the fact that you might get it and have a plan for dealing with it.

Know too, that you are a member of a global community and your needs don’t outweigh the needs of others. Just because you want enough toilet paper on hand to get you through 2023 doesn’t give you the right to deny someone who might need it right now.

Hoarding items and spreading, “doom and gloom” rumors gathered from various sources doesn’t do anybody any good. This is especially true for leaders of organizations. Sometimes the most important thing you say is the thing you choose to leave unsaid. Everyone knows the concerns by now, assure them with what’s been done in preparation. If that fails, try using a Southern accent.
_____________________________________________