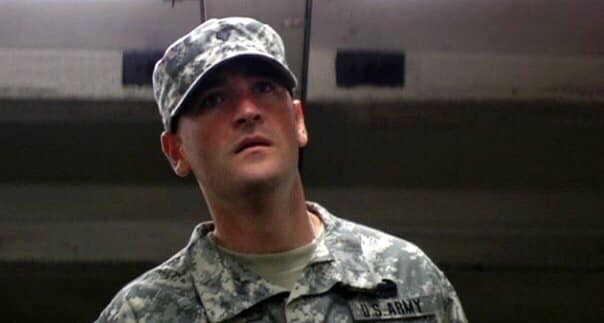 Like his brother, Max Martini, Chris Martini is a true American patriot doing his best through film to bring awareness to veteran issues. In 2014, Amazon released his award-winning feature, Trooper. It is a movie that brings awareness to something much more than PTSD.

The Department of Defense’s (DoD) Suicide Prevention Task Force has revealed that from 2005 to 2009, more than 1,100 members of the Armed Forces took their own lives; an average of one suicide every 36 hours.

According to the National Coalition for Homeless Veterans, about 33 percent of the adult homeless population are veterans – 67,000 veterans are homeless on any given night.

The Department of Veterans Affairs estimates that close to 95 percent of all combat vets who served in Iraq and Afghanistan will suffer some type of Post-traumatic Stress Disorder (PTSD).

While these statistics are fascinating, and while the movie Trooper does touch on such subjects yet, does not delve deep into any specific one, it does touch on something rarely discussed yet, just as staggering.

During the first Gulf War, the United States sent approximately 900,000 service members to the Middle East. As of 1996, the Veterans Administration estimated that approximately 489,000 of those Gulf War veterans received medical care at their facilities—more than half of those sent abroad. More alarming is the fact that an estimated 10,000-12,000 Gulf War veterans have died in a one-year period since the end of the war in 1995 to 1996. These statistics come from multiple references which include the Department of Veteran’s Affairs.

But if you want to get angry, get angry at this:

In 1995, Life Magazine published an article titled, THE TINY VICTIMS OF DESERT STORM – Has Our Country Abandoned Them? The article covers an alarming crisis which entails a plethora of ailments among service member’s new born children.

What many veterans from the first Gulf War have identified as the leading culprit behind these children ailments is parental exposure to Depleted Uranium—parents whom are veterans, who served during the first Gulf War, and through exposure got contaminated with DU– passing the exposure to their unborn children upon conception.

The American Government played many games with the Depleted Uranium debacle–from failing to admit DU exposure happened, to failing to accept DU sickness was very real in our Veterans, to the passing of DU to our children.

Another interesting subject rarely spoken of which Trooper does cover in a unique passive manner is hereditary PTSD.

Yes, PTSD testing shows it can very well be hereditary.

“Research evidence clearly suggests a predisposition or susceptibility for developing PTSD that is hereditary in nature, with 30% of PTSD cases explained by genetics alone. For example, there is a study of twin pairs who were exposed to combat in Vietnam where some were monozygotic, or identical twins, and some were dizygotic or fraternal twins, the latter being no more close genetically than siblings. This study showed that the identical twin with PTSD had a co-twin who had an increased risk of PTSD compared to the non-identical twin pairs. There was also evidence that those identical twins with a smaller hippocampus were more likely to develop PTSD following a traumatic event.”—Harvard Medical School.

Depleted Uranium, a broken VA system, children of veterans needs, and hereditary PTSD—its all in the movie Trooper.

Trooper is described as “A story of a father and son, two veterans from two very different Wars, helping each other to get through each day, and heal the wounds of War.”

The movie is well worth the watch if you want to see something showcasing a completely different twist to Veteran issues rarely discussed. Chris Martini did the Veteran community a service in creating this film. We should be grateful he is using his talents to help us bring attention to current needs—not just our needs as veterans but the needs of our family members as well, especially our children.

The film is available at –