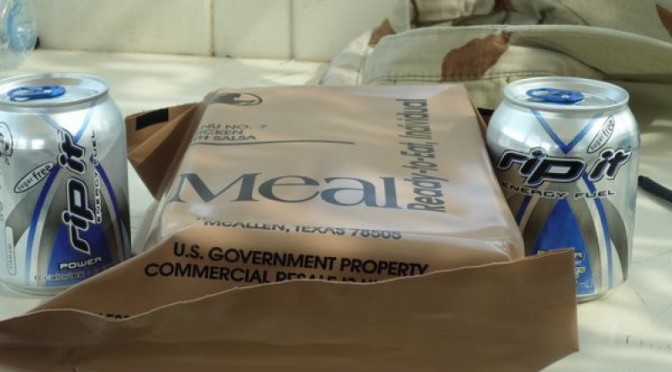 One of my favorite things in the entire world is watching people fall while simultaneously moving at a high rate of speed. Even more enjoyable is when they do it at night. Most everyone can relate. It’s the “glad that didn’t happen to me” factor. I think it’s likely that feeling will be alive and well for some of you during this story.

This story plays out in late January 2006. My platoon was in Ramadi, Iraq. In case you don’t know, the country is god-awful cold in the winter; especially being the top gunner of a vehicle. Multiple layers of fancy-pants military cold-weather gear are what kept me warm. We got word that we were going to go bang another target for the eighth night in a row.

Typically, that many days in, the guys are ready for a night or two off. Everyone’s over it. Working that many days in a row without shenanigans starts to wear on your psyche. We began to prep all of our gear, body armor, and weapons. We were deep in the business of building charges and getting comms checks when we got the “stand down” call. For the whole night. Helllllllll yeah. I immediately looked at my buddy Tom and we both said the same thing at the same time. “Case Race!”

What is this Case Race of which I speak? Some of you may know what I’m talking about. Some may call it by another name. Some may not ever understand the glory involved which the victor receives. What a Case Race is, is a really bad idea. You and your squad, fire team, gun team, or any other team, try to finish an entire case/24-pack of Rip-its the fastest. If you have ever deployed, you are very familiar with Rip-its. As Vincent Vargas can attest, they cause bat shit crazy side effects. Every flavor has different ones.

The main one is your typical caffeine buzz. The original flavor steals all metabolic water from you and molests your kidneys while the sugar-free one has pretty much the same effects as lit-gasoline would on your stomach lining. For some reason, I always thought I could hear my teeth when I drank that god-water. The last flavor was citrus. Citrus was smoother to drink, better tasting, and made my insides less sad than the first two, even though there are around 67 grams of sugar in that tiny can. Therein lies the problem. You never see the storm coming….

As Tom and I downgraded from combat-ready clothes into PTs, we decided that no one else was game, and we would have a one-on-one challenge. Whoever can drink the most, wins. What was the prize? Other than massive amounts of bragging rights, I think the wager was a dollar. Tom, being way smarter than I and a sneaky fricken Canadian, suggested that I go first. So, like a moron, I accepted. As I cracked that first pop-top of joy juice, I was confident I would crush him. Boom, one down. Cracked open another one. Slugged that one down too. I burped. I started working on number three. That one took a couple of minutes because my belly was feeling full at this point. I still felt as if this was a good idea. Number four went down with little argument. I could see that Tom was impressed and the ego-boost powers me through can number five.

At this point, I had somewhere in the ballpark of 30-35 ounces of Rip-it sloshing around inside my stomach, all of which was ingested in under thirty minutes. I could tell that number six was going to be a bitch. It was. Every sip eroded my confidence in my drinking ability. The sixth can took ten minutes to finish. I regretfully cracked open number seven. As I finished with my first swig, my squad leader kicked in the door to the MWR, all Steven Seagal-like, but with less awesome ponytailness. He informed us that the mission is back on and it was now time-sensitive. So, being the asshole that I am, I looked Tom dead in the eye and said “F-you.” Then I proceed to smash can number seven. Looking back, that final bit of arrogance is what probably screwed me over.

I began to put on my gear. Now, I had to put on about 4 layers before body armor which means I was jumping through my ass to be ready on time. As I was getting ready, I notice I was feeling pretty sick. I shrugged it off and drove on. Everything felt fine as we did our final checks and rolled out.
Twenty minutes into the forty-minute drive, I started to sweat. Not just a little bit, but a metric shit-load of sweat. There was a river of it from my neck, down the crack of my ass, and dripping off of my coin purse. I was actually soaking my clothes. I knew it was because of the Rip-Its. I shrugged off the notion that something terrible was about to happen.

While my menopausal-style hot flash was raging, we reached our stopping point and the vehicles moved into the security positions. While I was riding up in the gun, the back of the vehicle contained 4 operators, a K9, and a really dude-like FBI lady. The vehicle came to a stop and as everyone jostled inside the crowded APC, I shifted and accidentally let go of a horrendous fart. Loud, and brutal, I didn’t even see it coming. The smell was awful as if a cage of ferrets and the insides of a sick old woman combined like Voltron. Every one of the career shooters looked at me and one just shook his head. I was so relieved that it left my body that I cared not for their judgment. But I was worried. My stomach was starting to turn a bit.

At this point, everyone left to start walking to the target. I’m pretty sure I saw Tom walk by my vehicle and give me the finger as if he knew exactly what was coming. I nodded and tried to return the bird. Nothing happened. My damn arm wasn’t working. I realized my whole body was humming. As my body started to do its own thing, my gastrointestinal discharge was destroying the paint job of the vehicle’s interior. The only reason I realized this, is because the driver was gagging. I could hear his dry heaves, and curse words being slung at me. Then the stomach cramps began.