HomeCultureBooks“This Is What I Re-Enlisted For?” A Warfighter’s Excerpt 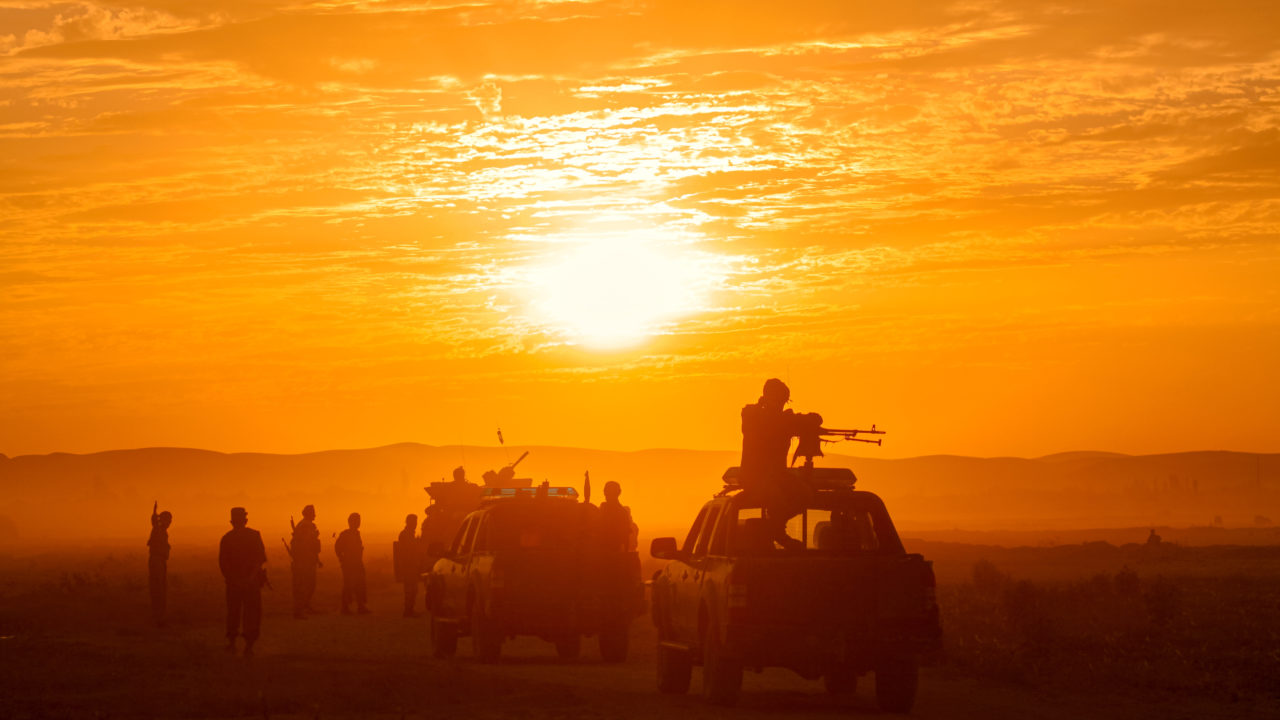 Editor’s Note: The below article is an excerpt from the book No Shit Here I Am: A Soldier’s Stories of Life During and After the War on Terror by Jarrod L. Taylor.

When I first arrived in Hawaii, my unit really wore me down. It was January, and they were set to deploy to Afghanistan in April. From my first morning PT with my platoon, I wondered what I’d gotten myself into. I was a sergeant coming in as a fire team leader, and a new platoon sergeant had also arrived on the same day. We went out on a platoon run, in formation, and our company first sergeant tagged along. I assumed that he wanted to get a feel for me and the new platoon sergeant.

We were only a couple of miles in when we started up a hill. Soldiers began dropping like flies, falling out of the formation left and right. Some were walking with their hands behind their heads, trying to catch their breath. Others were doubled over, clutching their stomachs, coughing, and puking by the side of the road. They were three months away from going to war, three months away from the mountains of Afghanistan that had kicked my ass and that made this little hill look like a pimple, and they weren’t ready.

Even worse, the other team leaders and squad leaders ran behind the formation, calling the men names, berating them, and talking shit to them. When a couple NCOs couldn’t hang on the hill and dropped out, no one said a word to them. I had started off with the other NCOs in the back, thinking that’s just how this unit did things, until I realized what was happening. I didn’t make any friends with my peers that day, when I said, “Y’all need to shut the fuck up. If your soldiers can’t run up this hill, it’s not their fault. It’s because you haven’t done your fucking jobs as NCOs.” I joined the men and pushed them, encouraged them, and talked to them about what they’d likely experience in Afghanistan. This was not the Army I grew up in with the 10th Mountain Division.

Later in the day, I met with the battalion command sergeant major. He looked at the Combat Infantryman Badge on my uniform and asked, “I see you’re wearing that CIB; do you have an EIB?”

I’d never had a chance to test for the Expert Infantryman Badge. Every time it had been on our training calendar, we would deploy. “No, Sergeant Major,” I replied.

“Anyone can get a CIB,” he started, “just for showing up. It doesn’t mean anything. An EIB, on the other hand, says that you’re an expert in your craft. All NCOs oughta have their EIB, Sergeant.”

He didn’t give me a chance to explain that I’d always wanted to earn an EIB, but I’d never been given the opportunity.

I stood there, listening to him talk about how things were done in his battalion, how he was not your average Command Sergeant Major, and how his expectations for NCOs and soldiers were far higher than in other units that I might be accustomed to. He went on for a while, making it sound like his unit was somehow the greatest infantry battalion in the Army. After that morning’s 90-minute PT session, I already knew otherwise.

Finally, he said, “You have a choice to make, young man. I understand that your wife is pregnant, and you’ve just come back from a deployment. Because you’ve just gotten back, we have to give you the option to stay behind when we leave in a few months.” He paused to straighten the name placard on his desk. “As an NCO, if it was me, I’d want to deploy and be with my men, but that’s up to you.”

All I could think was, My men are at Ft. Drum. These aren’t my men; my men are physically fit and highly trained in their jobs. I don’t even know these guys’ names yet. Also, I wanted to say, I didn’t ask for this CIB. I would have been just fine staying at home, like you, doing a little land navigation course, demonstrating some basic infantry skills, and knocking out a 12-mile road march to get a badge.

Instead, I replied, “Understood, Sergeant Major.”

I left, wondering, How the fuck has a command sergeant major with 26 years of service never done anything more than train? I certainly don’t mean to take away from other soldiers’ service. Some guys never went overseas. It’s not their fault, and it doesn’t mean they didn’t volunteer to stand up if they were ever called upon. But this man had been wearing the uniform since before I was born, and here he was, talking down to me because I had been sent off to war—twice. Bitch, I’ve already played the big game, and you’ve done nothing but show up for practice. At that point, in the whole battalion, I only saw three CIBs. Three of us had been to war: me, another team leader from the 82nd Airborne Division, and the battalion commander.

After talking with my company first sergeant, I elected to stay behind. Pretty quickly, I was moved to our headquarters company and assigned to the battalion’s rear detachment. Almost every day, I’d report to work and be told that they’d changed their minds, and I’d be deploying. Later in the day, I’d be told not to worry about it, and that I should plan to stay behind.

When they finally left for Afghanistan, I stayed in Hawaii, but the daily yo-yo continued. I was going, then I wasn’t, then I was, then I wasn’t. “You’re going in two weeks. Get your stuff ready.” “You’re not going; don’t worry about it.” Not knowing what was going to happen from one day to the next was stressful. That whole situation was hard on Theresa too; she was pregnant with our first child and 4,000 miles from everyone she knew. Honestly, I would have been fine with staying or going, I just needed to know. The constant back and forth was tough.

I attended a promotion board and was promoted to staff sergeant while I was on rear detachment, and apparently there were some people in the battalion who were not pleased with that decision. I was in our battalion commander’s office, sitting at a conference table doing some paperwork, when a man I didn’t know walked in wearing civilian clothes.

He looked at my name tape and said, “You’ve gotta be shitting me. You’re the piece of shit they promoted? Don’t get used to those stripes, Sergeant. We’re gonna reverse that promotion. You didn’t earn it.”

Captain Hudson, our rear detachment commander, walked in about then. The angry man turned to him and said, “What do you think you’re doing here, Sir? You can’t just promote soldiers. He hasn’t even proven himself in combat.”

The first sergeant stammered for a second, then looked at me, “No he didn’t. Anaconda was 101st Airborne, not 10th Mountain Division.”

“First Sergeant, my company was attached to Task Force Rakkasan for that operation,” I added.

He looked back at Captain Hudson, “Well, he hasn’t proven himself in combat in this battalion.”

I left the room wishing I could’ve said what was on my mind: If that’s how this works, then no one in this battalion, including you, First Sergeant, or the sergeant major, had proven yourselves in combat to earn your stripes. You’d all be motherfuckin’ privates.

The First Sergeant’s wife was just outside the door listening to the whole conversation. She gave me a little smirk as I passed by, like she got a kick out of hearing her husband talk down to soldiers.

Later, Captain Hudson laughed and told me, “I love that you said that you were attached to the Rakkasans. That first sergeant came from 101st, and he was a Rakkasan. He’s always talking about how they did things back in the Rakkasans. That couldn’t have been any better.”

After more back and forth about deploying, I finally got orders to join the rest of the battalion in Afghanistan. I wasn’t the only NCO on the shit list at that point, and I wasn’t the only one who got orders that month. By the time I was going through SRP (Soldier Readiness Program), essentially, pre-deployment processing, I was over it.

About halfway through the stations, I approached the mental health screener. The woman there asked how I felt about deploying, and I let her have it. It was October 2004, and I was preparing to leave for my third overseas tour. That early in the wars, there were still plenty of soldiers and units who hadn’t deployed at all.

I told her, “This will be my third deployment, and my son is three weeks old today. How the fuck do you think I feel?”

She seemed taken aback, and then she asked how my wife felt about me leaving her with a new baby. I dropped a few more f-bombs on her before telling her, “Just stamp my fucking paperwork, so I can get the fuck out of here.”

I couldn’t help but notice the son-of-a-bitch was wearing a Combat Infantryman Badge where his EIB had been sewn on before.

Grab your copy of No Shit Here I Am: A Soldier’s Stories of Life During and After the War on Terror by Jarrod L. Taylor.