HomeCultureBooks“Lance Corporal of Marines”: An Excerpt From Aaron Kirk’s “The Hill” 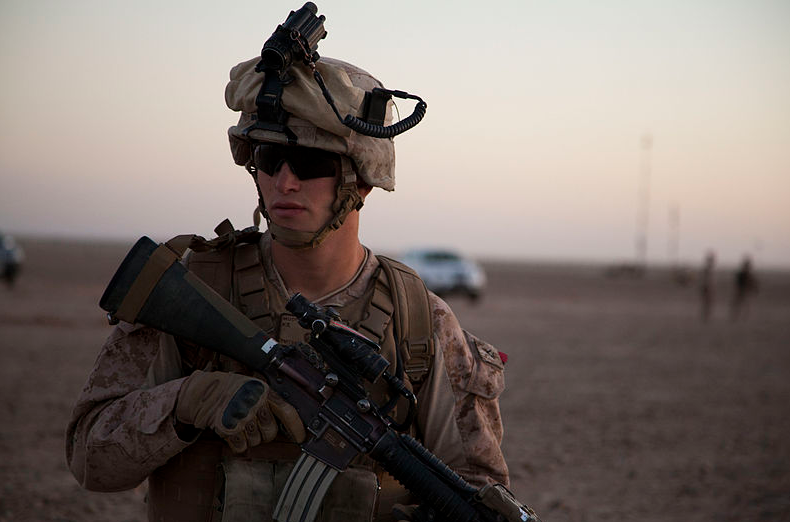 Editor’s Note: “The Hill” is an Afghanistan War memoir by Marine Corps veteran Aaron Kirk. You can find print and electronic versions on Amazon, and you can read a great review published in Black Rifle Coffee’s “Coffee or Die” magazine.

Nobody tells you how hard it is to lead your friends. I’m a Lance Corporal, they’re Lance Corporals, and all I want to do is shoot the shit. Skate. Smoke Pine Lights out by the burn pit. Let somebody else make the decisions.

But on any given day there’s a squad up here that needs radio batteries, or water, or ammunition. Ten men and a dog that need feeding. Two daily excursions that need destinations. Disputes that need settling. No matter how underqualified I think I am, it’s my problem. It’s all my problem.

Since the beginning of the deployment, I’ve lost nearly twenty pounds on a frame that can afford to gain ten. Physically, I’m a jungle cat. Mentally I find my patience and my intellect exhausted beyond anything I’ve experienced. Every night I stay up to talk to the men on post. I am awakened from sleep in the middle of the night to speak to higher. Long day patrols where I sweat anxiety with every step, frying my adrenal glands. Midnight observation posts where I strain to watch shady farmers dig through night vision monocles.

I feel guilty for feeling sorry for myself, but that doesn’t stop me from engaging in unbridled bouts of self-pity. I doubt myself. Many days I wish they would send a Sergeant or a Corporal out here. Someone with qualifications and training. Just let me be a fireteam leader again. One among many. Tell me where we’re going and I’ll suit up my team and we’ll hop to it and you can lead us there, Sergeant. As long as I don’t have to make any hard decisions about who goes first or whose turn it is to walk point or who gets to live.

Because the Marine Corps Way insists on perfection, even tasks I delegate need my supervision. If someone takes out a patrol, I check their cards and grids. If logstats get recorded, I double-check for accuracy before they’re sent up. The only standard is the Marine Corps standard, even though this slips further and further away as we drive deeper and deeper into the deployment. I don’t know how to slow down in my pursuit of it, and it shows in my eyes, my speech, my demeanor. I become involuntarily imperfect. The war makes my neck thin and my shoulders stooped. Each day I survive on an inner fire of insecurity and fear of letting anyone—my men, the Bravo, the Actual, the Marine Corps—down. But it does not come easy. I am not Sergeant Hernandez of my first deployment. I am not superhuman.

I am just a young, scared Marine. I deal with the same things that the other men of the Hill do, and maybe do a worse job of handling them. Food poisoning and pit vipers, coffee running out, tearing the seat of my pants. Higher-ups come to the Hill which means a battle to get the men shaved and in proper uniforms, but it’s so hot I let them wear pants and a skivvy shirt. Then all of a sudden someone’s upset they got the same crappy shift on post two nights in a row, so I have to tell one friend to switch with another friend, except I can’t pull rank and I sure as hell can’t intimidate him. I have to persuade him to do it, and even when I’m done he’s still not happy because grunts aren’t happy.

Or maybe the chopper drops off supplies at the bottom of the Hill and we need to get everything from the bottom to the top, and every man can carry two boxes of MREs at a time, except some of the men choose not to and only carry one, which slows down the whole operation. So I have to figure out how to get the men to carry two boxes at a time and to get the ones that are slacking to move faster, and to have someone on overwatch with a machine gun, making sure we don’t get smoked. But who’s on overwatch? Who’s on the working party? Who gets to rest? How do we get all these cases up onto the Hill when it’s a hundred and twenty degrees and humid like Tampa? And how do I get them to start moving again, knowing that we have a grueling evening patrol and nobody’s going to sleep tonight?

It’s everything. It’s all the time. I need to persuade my team leaders to fill the Hesco barrier on the exposed north side of the Hill while I’m out making friendly overtures to Hajji Zulmai. The Hesco barrier, normally filled by engineers driving a backhoe, needs to be filled by hand, with entrenching tools and a lone shovel. A monumental task, maybe essential to the survival of the squad if we’re ever attacked on that side, maybe pointless because we’ve never been shot at.

Pouring dirt in the square wall seems utterly futile while you’re doing it. My men shovel scoop after scoop of dirt into the endlessly deep Hesco, never feeling like they’re getting anywhere, asking “why don’t we just leave it as-is?” as if that thought doesn’t speed through my head every time I look at it. Sometimes I come back from patrol, and nothing’s been improved, and nothing’s been done, and I am a Lance Corporal in charge of Lance Corporals.

I drop flak and work on it myself, waiting for the men to join me. They usually do. They are extraordinary men and they are doing the best they can and I am one of them because I am a Lance Corporal. With rank, perhaps we’d get more done. Perhaps the other squad leaders at Durzay would cut me some slack. Perhaps Bravo and Actual would let me slide more. But without rank, I can play chess and gripe and complain. I don’t have to maintain a strict social isolation. I can ask Jason and Terrance their opinion and they’ll tell me what they really think.

What they feel, what we all feel, is a growing sense of isolation from the outside world, from the rear echelon Marines at Dwyer, even from our platoon-mates down at Durzay. Festering resentment boiling over. Sometime soon, we’re told, we’ll need to come down off this Hill, and then we’ll be among our peers again. Everything is measured in degrees. Justified or not, we rate our degree of danger, brutality, combat as higher than the ones down at the base just three-quarters of a mile away. Where once we were house animals, wondering when we would be let back in, now we are a pack of wolves, hunting and surviving on our own. The Hill is our home, our source of greatest hardship and misery, but it is also the thing that differentiates us from the rest of the platoon, the company, the battalion. We are the Lost Boys of the First Battalion, Third Marines, cast away on the furthest-flung island in the Helmand sea. Expended and forgotten. Left to fend for ourselves, with only the Marine Corps Way as our guiding code. And the Way doesn’t suit us anymore.

This first appeared in The Havok Journal on August 2, 2021.

“The Hill” is published by The Second Mission Foundation and is available on Amazon.com.