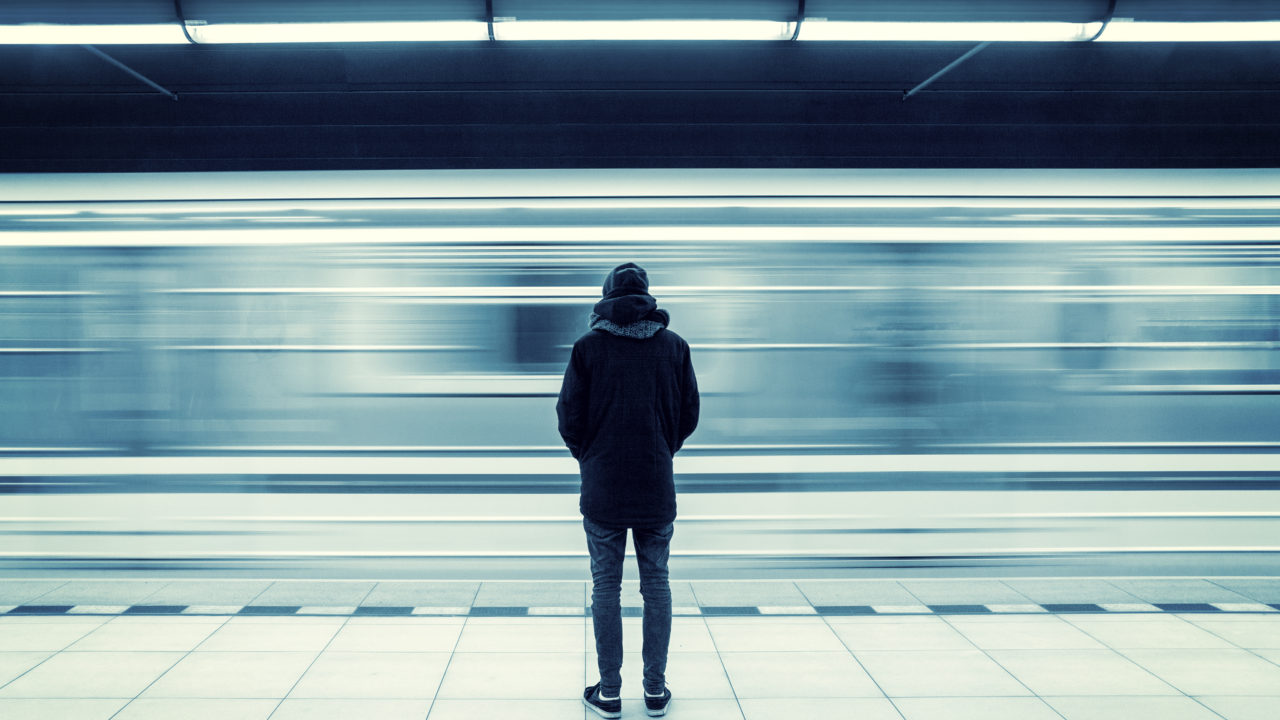 This first appeared in Frank’s blog on July 23, 2020. It is republished here with the author’s permission.

The Union Pacific tracks cross Oakwood Road about one mile from our house. Long freight trains use that set of tracks to shuttle between Chicago and Milwaukee. Some of the trains pull a variety of railroad cars to transport a variety of goods. Some of the trains contain a seemingly endless number of coal cars, probably to deliver the coal to the power plant downtown. It not unusual for the trains to extend for a mile or more, and they often have several engines hooked together in order to keep the train moving. The trains are loud. We can hear them sometimes from our house.

Yesterday I walked down Oakwood for some fresh air and exercise. It was mid-afternoon and it was hot outside. I generally walk west to the tracks and then immediately turn around to go home again. As I neared the crossing, I saw a young man park his PT Cruiser in a field just to the west of the tracks. He got out of his car and began setting a video camera on a tripod right next to the crossing. He had a microphone rigged up to the camera, apparently to get sound to go with his pictures.

The young man looked at me as I approached. He was tall and lanky. He had a scraggly beard and thick brown hair that had never felt a comb or a brush. He wore glasses, and he had on a reflective vest, like a county worker.

I asked him, “Waiting for a train?”

He nodded and pointed to the south.

I stopped walking and looked down the tracks toward Chicago. The tracks were arrow straight and seemed to go forever. Far in the distance, I could see the faint glimmer of a headlight. I couldn’t tell how far away the engine was, or even if it was moving. The train was at least a mile from us, maybe much further than that.

I like to watch trains, maybe not quite as much as this guy, but I get a thrill seeing the locomotive coming toward me on the tracks. It’s like being in the path of steel tornado.

“Do you ever ride on them? Amtrak?”

The young man adjusted his camera on the tripod and looked at me warily. He said, “Yes.”

The young man was gawky and moved with a certain clumsiness. His right hand twitched when he spoke, and he held his fingers in an odd way. His face was filled with confused anxiety, like he couldn’t remember if he had left the oven on at home.

The youth spoke up, his hand restless at his side, “I rode the Hiawatha to Chicago back in 2018. I didn’t take the train last year, because my father got hurt. Well, and this year, with the pandemic…”

I nodded. I told him, “My wife and I took the Empire Builder a couple times.”

The young man seemed perplexed by that.

“Yeah, it goes all the way to Seattle.”

He shook his head. “I never take long rides. I don’t have the money for that.”

Then he stated flatly, “This train that is coming will have four engines.”

We both stared toward the south. The headlight on the lead engine seemed a bit brighter. I couldn’t hear it, so it had to be quite far away. I wiped some sweat from my eye, and I thought about the trains I rode in Germany many years ago.

I asked the young guy, “Have you ever been overseas?”

His forehead furrowed and he asked me, “What do you mean by ‘overseas’? Do you mean like on the other side of Lake Michigan?”

The man shook his head and said, “No. Have you been there?”

“I wasn’t in a war. I was in the Army when we were between wars.”

I turned to look at the young man. I clearly had not made any sense to him. I noticed that he wore a t-shirt with a picture of the Hiawatha on it.

I told him, “I was in Germany with the Army. I rode the trains there.”

“Oh, then you were there during World War II.”

I glanced at the guy. He was dead serious.

We stared down the tracks. The single headlight had turned into three lights. The train was obviously closer, but still outside of hearing.

I wiped some sweat off my face. I was getting quite warm in the sunshine.

I said, “I’m going to go now. I hope you get some good pictures. It was nice talking to you.”

As I stepped away, he said, “Yeah. Thanks. What’s your name anyway?”

I stopped walking and turned to face him. “I’m Frank.”

He nodded without smiling and said, “I’m Brandon.” He went back to his camera.

After about five minutes, I could hear the dull roar of the diesels behind me. Then I heard the blast of the air horn from engine, and the rhythmic clatter of steel wheels on the tracks at the crossing.I didn’t turn around to look.