People often ask me if doing anesthesia is dangerous. The answer is, “yes, but also very safe.”

How are both of those things true? Because we know the dangers are there and we set monitors up to watch our patients very closely. Our constant vigilance and technical skill decrease the risk tremendously.

In my second profession as a firearms/self-defense instructor there is, rightly, a significant amount of emphasis placed on situational awareness and mindset. The act of shooting is a very small percentage of an effective self-protection strategy. The greatest portion of learning to become something other than a victim is intellectual and psychological.

Despite the copious sources explaining and coaching situational awareness there seems to be an enormous disparity between the preaching and the righteousness of the congregation. Most people do not seem to pay attention to their surroundings. Conversely, some people are hyper-vigilant to the point of finding themselves the butt of “that (tacticool) guy” jokes. Often in instructor development courses, the comment is made, “if the student doesn’t learn, it’s a failure on the part of the instructor.” While I think that statement requires a healthy dose of qualification to it, there is some significant truth there.

It is difficult to compile statistical analysis of reality-based events that occur as a result of situational awareness since the control group creates a null event result. I have developed a theory which I call the Untrained Defender Paradox which essentially states that the majority of successful civilian gun defenses (ranging in numbers up to 3 million per the CDC)(1) are accomplished by the un- or insufficiently trained. This is partly because the trained combatant is able to avoid the situation through awareness, verbal judo, or other de-escalation techniques. Marc MacYoung states this similarly in his book In the Name of Self-Defense: What it costs. When it’s Worth It.(2) The targeted demographic in this paper is therefore the training but not yet expert individual. 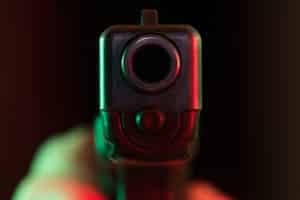 We as trained self-defenders are confident that situational awareness is a key principle but know that there are still daily events of awareness failure among gun owners. It would seem that as a community we have a system failure. In order to solve this problem, it is important that we take a systems-based approach. The problem could be caused by a lack of interest in education, lack of educational sources available, poorly presented (instructor-based) information, or failure of the information to produce adequate results. I believe that all of these possible causes and more play into it, but I am focusing on just one piece of the pie in this article: failure to apply human psychology and limitations to data in the partially trained or not yet expert gun owner demographic.

In our training program at Condition Red Response, we combine the concepts of Col. Jeff Cooper’s color-coded mindset system(3) with Boyd’s Observe, Orient, Decide, Act (OODA) loop(4), and human response time or “reactionary gap.” Human response time is often taught in self-defense and shooting schools in conjunction with Dennis Tueller’s principle(5) in what is popularly (but incorrectly) known as a “Tueller drill.” Officer Tueller’s principle is perhaps one of the most misinterpreted and misapplied pieces of genius in self-defense training. It can, however, be used to great effect if properly applied as “alarm criteria” which we will get to shortly.