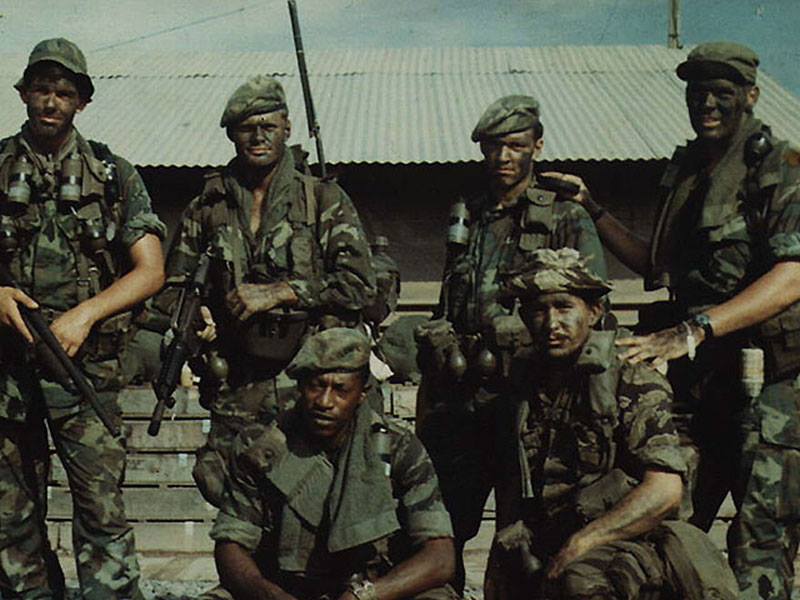 Some of the Team Leaders were more “aggressive” than others. For some reason, Team 4 always had a Team Leader the “aggressive” ones called NUTS. Of the first four Team Leaders of Team 4, three are members of the Ranger Hall of Fame. We always seemed to get more than our share of action. My guess would be that we came under fire about 60% of the time. Usually, we were engaged with about a platoon-sized force or smaller. The largest force my team ever took on was an NVA company. It was the one and only time we were seen before we wanted to be.

The 9th ID had just arrived in RVN and was convoying from the port at Vung Tao to their new base camp at Bear Cat. Someone very high up decided that snipers were going to be a problem, so they sent all of our teams out along each side of the highway, along likely infiltration routes. All of the 173rd LRRPs received a big laugh out of this because we all knew no self-respecting VC or NVA trooper would waste any time on a bunch of ‘leg’ cherries. We set up on our trail, with my partner Butch and me on the left about two meters off the trail. The alpha team leader, Ricca, and the point man, Moya, were on the right – about twenty meters from us. The team leader, Jake, and the radiotelephone operator (RTO) Bum were about ten meters off the trail in the middle. This was our normal ambush set up, but none of us were being particularly careful.

Jake was messing with the signal operation instructions (SOI), making up the morning situation report (SITREP), and didn’t see Ricca signal, but I did. I nudged Butch and whispered “Company” as I slid the selector switch on my rifle from safe to semi-automatic. A lone VC comes “Diddy Bopping” down the trail with an M1 carbine at the ready when he sees Jake moving, sending out our SITREP. As he was turning to take Jake, I put three rounds in his chest as Ricca put three rounds in his back. He went down like a whore on payday, and as I looked behind him on the trail, I could see columns of two in NVA uniforms moving off the trail. All hell broke loose with rounds flying everywhere, I remember seeing Bum, hiding behind a small tree (about four inches in diameter) and chunks of the tree flying off next to his head.

Then came the lull in the fight when everybody changes magazines and that was our time to execute or immediate action drill. Jake yells “LETS GO” so we all heaved a frag, blew our claymores, and Ricca and Moya came flying past us like the wind. Jake and Bum fired a few rounds to cover them and then took flight past us as we put down covering fire. Now it’s Butch and I’s turn; it’s weird how fast you can move with a 70-pound ruck on your back – given the proper motivation. As we were running straight through the jungle, we could hear them behind us and off to the left, cutting off our path to the extraction landing zone (LZ). Jake changed our path to the right to put more room between the flankers and us.

I yelled to Jake that they were right behind us (we had to crash through the jungle, they could run in the trail we left), so Jake makes a sharp 90-degree right turn, runs twenty meters, and stops. This is a drill we had practiced many times and had used well before. The first five NVA that came around the corner in our back trail disappeared in a hail of bullets and frags. So much for ‘Charlie’ trying to overtake us from behind. We were still cut off from the closest LZ and now we could hear the ones who were behind us, moving to our right. Well, they couldn’t move through the jungle any better than we could, so now it became a foot race to another LZ. After a 2,000 meter dead sprint through the jungle carrying 70-pound rucks in 110-degree heat with 98% humidity, Butch goes down like he’s shot but I don’t see any blood.

I yelled to Jake and turned Butch over, but still no blood. Butch looks at me and wheezes, “I can’t do it, leave me”. About that time Jake snatches him up by the collar with one hand, strips off his ruck and LBE, and tells him in the most menacing whisper I’ve ever heard, “What Charlie could do to you ain’t shit compared to what I’m going to do to you if you don’t start running right NOW.” I took his ruck and Bum grabbed his LBE, and off we ran. Another 1000 meters and we came across an LZ big enough to get a slick into and out of, so we spread out in the wood line while Jake talked to the slick pilot. The bum had already called in our code word, “TIMBER” which meant “We’re all fucked up, come get us quick,” while we were still running.

Jake had Moya and I both take out the same color smoke and told the pilot that we were going to throw smoke and run, to have the gunships suppress the smoke. We saw the slick coming in, Jake gave the signal, and we popped smoke and ran out onto the LZ as fast as we could. Just as the slick came in, the gunships opened up on the wood line behind us. Moya was always the first man on and his job was to count noses to make sure no one got left behind. Ricca was behind him, then Butch, me, Bum (the RTO) and last was Jake. Moya yells “SIX” at Jake who gives the pilot the “thumbs up” and away we go. As we are lifting off, the wood line looks like an ants nest with NVA everywhere, then the gunships make another run and they start to disappear in the rocket explosions.

I looked at Butch and screamed, “What was that back there about you couldn’t go on? You could’ve got us all killed, you sorry mother!” Up until that moment, Butch and I had been the best of Best Friends, closer than you could believe…those were the last words I ever spoke to him. He was moved to another team and did fine, but I never spoke to him again. It may seem odd, but I grieved like he was dead.