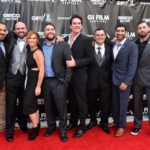 RANGE 15: A Civilian’s Perspective On a Military Movie by Danny Stormborn This first appeared in The Havok Journal May 31, 2016. This weekend, I had the distinct privilege of attending the DC Premiere of the upcoming military mega-hit RANGE 15, which opens nationwide on June 15th. For anyone living on an icecap or in some other social media blackout for the last year, … END_OF_DOCUMENT_TOKEN_TO_BE_REPLACED